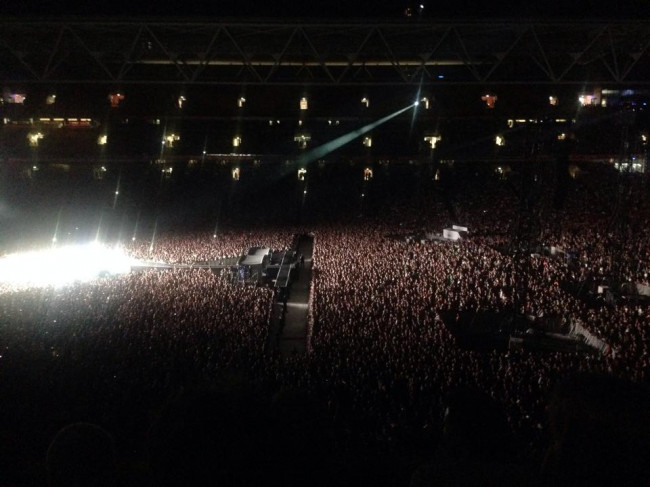 Foo Fighters bum rush the stage to tumultuous applause from an awfully dressed, overweight crowd. They break into the first of many forgettable songs that only have 3 chords the entire time. There’s a 60-year-old guitarist nobody addresses. He looks like he’s won a competition to fuck a pornstar and can’t believe his luck. Second song starts. It’s the second song I learnt studying classical guitar in year 10. Nobody’s sued him because the rights have probably expired. It’s the same as the first song but from a different album. Taylor Hawkins looks like a doe-eyed Kurt minus the smack. A fresh new handbag for Dave to carry around. Kurt spins in his grave. Dave does an ego walk. Third song starts; it’s ‘Learn To Fly’. For a second you forget about how bad the first two songs were and then they superimpose an embossed frame over Dave’s face. Kurt rolls in his grave again. The stepdad guitarist smiles. The rest of the band looks pissed off. ‘Breakout’ is the fourth song. I don’t know how it’s possible to embellish this song even more but they manage to turn it into a carbon copy of the first two tracks. Oh wait here’s a blues solo. I think he might be 65. Kurt rolls in his grave yet again.

‘There Goes My Hero’ was an alright song a long time ago. It’s not when the bridge goes for 8 minutes. It had seven crash-out endings. I think Dave does 6 laps of the stage during this one. Now he’s sweaty and finished. He’s playing a blues progression and reminiscing about playing Big Day Out. I hope this story is going somewhere. It’s been about three minutes right now. Oh, he went to jail for drunk driving. Shame he’s not been impounded for public displays of sucking your own dick in front of a sold-out Suncorp Stadium crowd. Thanks for the moral lesson Dave. Kurt spins in his grave again. If this band isn’t cashing fat cheques from Gibson then I’ll sit down with a plate of my mouldy old Vans, get a knife and fork, and tuck in. The next three songs are forgettable. Dave knows. There are no ego walks for these.

It all melds into one arduous blues progression until they play ‘Monkey Wrench’. Oh hey, it’s ‘Monkey Wrench’. This was one of their biggest tracks in the 90s. The audience doesn’t care. It’s not ‘Best Of You’. Wait up. This song goes for like 4 minutes tops, right? This bridge alone is approaching the 15 minute mark. They’ve tried to turn it into Dark Side Of The Moon. It goes for a total of like 17 minutes. Now he’s yelling again. Oh wait this is still ‘Monkey Wrench’? Old mate that got to fuck a pornstar is smiling like he rused us all. You’ve only rused your own career and the population of Loganholme. The last chorus went for the length of the recorded song. It ended. No wait it can’t end without a drum solo. 30 seconds? 1 minute? He’s still going. It’s like they can’t actually decide when to ever end a song, or perhaps their careers.

Dave’s got the acoustic. Reckon this one’s about the miners? How much karma is he gonna get off this? Dave’s singing this one for the cheap seats, so he says. Makes sense because it’s definitely the Foo Fighters song that you’d pay the least amount of money to hear (read: $0). The band pops up on the middle of the ego ramp and Dave talks about how his high school band covered Queen. They then cover ‘Under Pressure’. I’m not sure if the biggest travesty is their rendition or the fact that nobody recognizes it’s a cover.

The set drags on for hours. The band reminds us that it’s two-and-a-half. This feels like detention. Thank god there are no encores. I’m not sure if the biggest wank was having 4 solos per track, or how Dave Grohl and Taylor Hawkins are seemingly trying to one-up each other by seeing who can open their giant fucking mouth widest to showcase their five-figure Napisan Oxy-Action veneers. You could actually land a jet in those abyssal gaping maws of quarter-assed musicianship.

Rock and Roll isn’t dead – it’s just in a coma and being wheeled around the country for a $200 entrance fee. Kurt rolls in his grave. There goes my hero, fleecing the music industry for all it’s worth. Watch him as he goes.

Related posts: What I did tonight instead of seeing Foo Fighters play live
When nice people make horrible music | the collected Facebook Foo Fighters vitriol
Do not mess with the critic, deutschbags. The critic is always right