Solange – A Seat At The Table (Columbia Records) 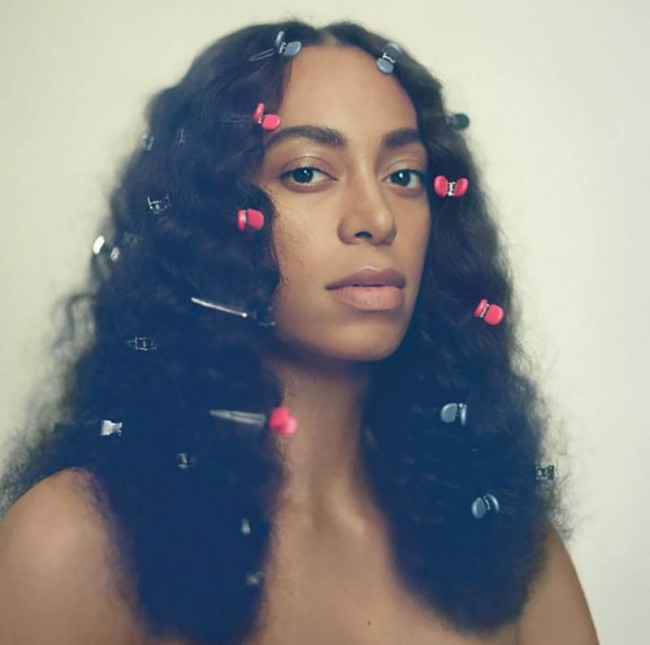 A Seat At The Table, Solange’s third album is a bittersweet diary of black existence in 2016. It’s soulful R&B is relatively minimalistic when compared with the already sleekly (Dev Hynes aka Blood Orange) produced 2012 True EP. The production is delicate but the messages are heavy-handed, stirring and vital in a year that has thus far been burdened with horrific and consistent police brutality, accounts of casual racism bombarding social media as people increasingly endeavour to share their despair whilst we (I would like to believe the majority of us) look in in complete shock and bewilderment. How have we come so far yet changed so little in 2016?

Solange herself shared a heartbreaking account of the discomfort associated with being present in a predominantly white space when she and her son Julez attended a Kraftwerk concert in New Orleans. Solange and Julez were dancing to their favourite Kraftwerk song ‘The Hall of Mirrors’ when she was met with hostility from four older white women who even resorted to throwing a lime at her head in order to urge her to sit down. Furthermore, Julez and his friend who was also in attendance were told to cease smoking e-cigarettes by a venue worker (they are 11 years of age) even though the vapour was blowing from the older white men in front of them.

These instances of casual racism resulted in Solange penning an affecting essay titled ‘And Do You Belong? I Do’, where she states:

You feel something heavy hit you on the back of your shoulder, but consider that you are imagining things because well….certainly a stranger would not have the audacity.

Moments later, you feel something again, this time smaller, less heavy, and your son and his friend tell you those ladies just hit you with a lime.

You look down only to see the half eaten lime on the ground below you.

You inhale deeply. Your husband calmly asks the group of women did they just throw trash at you. One woman says, ‘I just want to make it clear, I was not the one who yelled those horrible, nasty, things at you.’”

“After you think it all over, you know that the biggest payback you could have ever had (after, go figure, they then decided they wanted to stand up and dance to songs they liked) was dancing right in front of them with my hair swinging from left to right, my beautiful black son and husband, and our dear friend Rasheed jamming the hell out with the rhythm our ancestors blessed upon us saying….

A month later we are met with A Seat At The Table, an ode to the black experience that is exasperated but never exhausted. A Seat At The Table finds itself both harrowing and euphoric as it navigates through the equal measures of pain and joy associated with the black experience. Solange compliments her storytelling with moving interludes spoken by her parents and other members of her collective as they cite their own aches and ecstasies.

On ‘Tina Taught Me’, her mother poignantly sums up resistance to black pride and the “all lives matter” mentality:

“What’s irritating is when somebody says, you know, ‘They’re racist!’ ‘That’s reverse racism!’ or ‘They have a ‘Black History Month’, but we don’t have a ‘White History Month!’

Well, all we’ve ever been taught is white history: so why are you mad at that? Why does that makes you angry? That is to suppress me and to make me not be proud.”

On another interlude, ‘So Much Magic’, Solange, Kelly Rowland and Nia Andrews sing acapella. “Don’t let, don’t let, don’t let anybody steal your magic” they joyfully sing on a recording that sounds like Solange has flopped out her iPhone recorder during a singalong. It’s optimistic, intimate moments like these that bring an overwhelming sense of community and warmth to the record that make its political statements so impactful and personal.

That sense of community is revisited on ‘F.U.B.U’ (aka For Us By Us), when Solange recounts universal experiences shared by people of colour as they board planes, nervously drive around in tinted cars, deemed criminals simply for being alive, and possessing black skin or even in the safety of their own homes, reflecting on feelings of isolation. The title pays tribute to the fashion label F.U.B.U which aimed to exhibit blackness in any space and whose acronym is today globally renowned for its simple and iconic message of black pride.

On ‘Mad’ Solange is joined by Lil Wayne in a down-tempo anthem of frustration that indicates there’s still a lot to be mad about in 2016. Lil Wayne, on his second collaboration with Solange, rhymes in a syrupy drawl over fleeting pianos and slow travelling bass whilst he explains that there’s still a lot to black survival. That he’s got a lot “to pop a Xan about.” Wayne’s contribution to this track pulls at your heart strings as he describes a suicide attempt and posits that despite his riches he’s still judged as a criminal, tip toeing through existence in grief. Solange’s vocals on this track are other worldly and fit perfectly over that soulful piano, as though they always belonged there.

The moments of self-doubt and infuriation about her experiences are met with anthems of celebration and a song such as ‘Junie’ perfectly encapsulates this. ‘Junie’ is a cheeky, wide-grinned ode to funk legend Junie Morrison, instrumentally with its honky tonk pianos and Andre 3000 falsetto. Junie, thrilled by the tribute stated “Solange has a great talent for representing and promoting freedom.” And it seems some of this ethos has rubbed off from his own arrangements for the Ohio Players and Parliament Funkadelic on the groovy and upbeat but ultimately political track that takes aim at cultural appropriation. “Don’t want to do the dishes/ Just want to eat the food.” It sounds Millie Jackson throughout and Kraftwerk towards the outro.

Singles ‘Cranes In The Sky’ and ‘Don’t Touch My Hair’ are both sonically light but incredibly powerful. ‘Cranes In The Sky’ utilises a simple drum beat, bass and sunny bursts of piano as Solange expresses a listicle of temporary and ineffective solutions to never-ending despair. “I tried to drink it away” she says “I slept it away, I sexed it away, I read it away.” At the conclusion of the song Solange finds her resolve as she hits a note that would have both Minnie Riperton and Mariah Carey nodding with approval.

‘Don’t Touch My Hair’, featuring Sampha, is the more upbeat of the two singles but it utilizes a similar sparsity, giving Solange plenty of space to adequately work through her gripes. Solange touches on the role of hair regarding black identity, strength, beauty and glory comparing it to the regality of a crown. Much like the remainder of the album, ‘Don’t Touch My Hair’ is an uplifting anthem about Blackness, uniqueness and pride. Earlier this year New York rapper  Princess Nokia touched on the topic in her brilliant track ‘Mine’, where she urges people to stop grabbing at weaves and asking “Is it real?” – “It’s mine, I bought it.”

Earlier in the week rapper Vince Staples said “Thank you to Solange Knowles for reconfirming my Blackness. I love my Blackness.” A Seat At The Table is just that: a stirring reminder that community and support is vital in a year where one too many dickheads are pushing their “All lives matter” and “White lives matter” agendas and far too many minorities are being killed, vilified or forgotten. If you don’t like it take a lesson from her track ‘F.U.B.U’, where she states “Don’t feel bad if you can’t sing a long, just be glad that you’ve got the whole wild world. This shit is for us.”