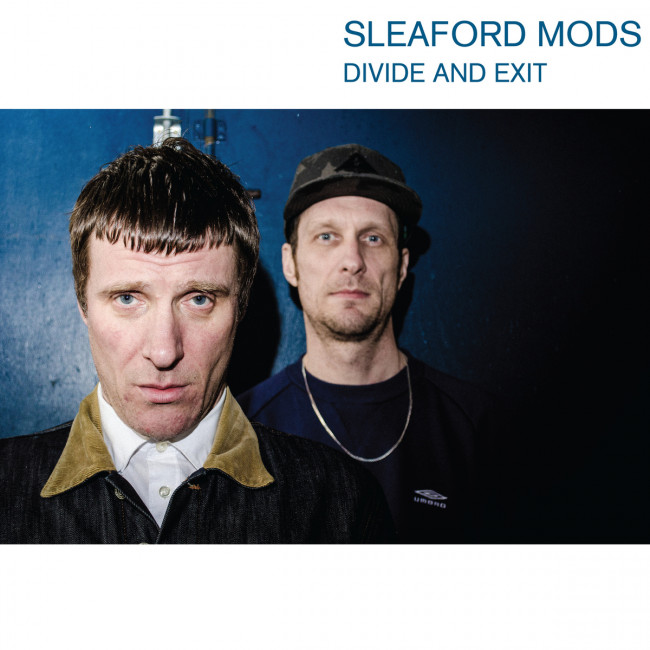 We interrupt this regularly scheduled broadcast to bring you an important message from Nottingham:

Over in the UK, you see, a tidal wave of beaming press is building behind the boisterous duo Sleaford Mods. Even Stewart Lee has nodded in approval of the ranting badass bass loops of the new LP, Divide and Exit. What’s happening here, kids? How are these uncouth muffs gaining buzz band status as they decimate other buzz band wannabes?

Now, yes. Before we advance any further, we must admit the inevitable, that this urbane spoken word art has spun ’round for some time, from John Cooper Clarke to John the Postman. But the world turns. This is not a rehash. Sleaford Mods are the real deal for our modern times.

Look. I’d be lying if I claimed to understand every inch of the working class politics that Sleaford Mods represent. These are the UK streets/frontlines that they report from, after all. What hits me is the laser-keen bass, and of course Jason Williamson, who fumes righteously at everyone and everything that deserves to be fumed at, his voice a machine gun of unrefined, curmudgeony English ire (and any hint of “singing” with a vicious sneer). I could begin to explain it, but the fact is that the ANGER pulses through and shakes you upright, because everyone else is too scared to be anything but nice in public, from those chummy dreamy indie types that nod sleepily at gigs to every student ever these days who are too busy twiddling their thumbs on their phones anyway to even notice the freaks they don’t like.

The fact is, I can’t stop giggling, even though I really don’t understand.

One diatribe crosses the ocean, though –

To disagree on social networking sites
Is to kill the counter-culture
The overturn has died
We pander to the camera and we want to be observed
We don’t get what we ask for, we get what we deserve

Wllliamson has sniped out the heart of this dysfunctional society’s malaise – the social medias. “You keep in your disgrace…ALL YOU ZOMBIES TWEET TWEET TWEET.” It is the human condition – the fixation with these ethereal networks and their micro-messages, and the cloud of smarm that such environs breed. The loss of awareness, the walls closing in around our little Facebook gardens, the disconnect from conversations with actual weight or value. That I get. That resonates like sirens blaring down the street. He’s assaulted this schtick before, but the ominous closer “Tweet Tweet Tweet” sinks the nail in hard without resorting to overwrought, black-and-white semantics. This is for our own good, kids.

But you know what else is righteous and visionary about Sleaford Mods? Williamson’s so sharp, he knows that women ain’t the problem. In fact, they’re the victims – “It’s all gone, what do I do? / I tell my daughter it’s not true / I tell my daughter it’s all gone wrong”. This is perhaps just a father despairing over the future of his family in general, but at any rate there’s a keen awareness there, eyes looking out from the side of the meek.

What’s more, Williamson doesn’t find this stance noble at all, but just plain common decency, as “you’re brave” makes painfully clear (with an ACE stalking groove, I might add) – “matter-of-fact statements about how he’s picking up his kids in two hours / twat / as if you’re brave”

Every target that Sleaford Mods aim their spitwads at is male – at no point does the “cunt” explicative refer to an actual cunt. Ya don’t believe me, you listen half a dozen times each to all of their releases and tell me what ya think then. The only broad they have a beef with is the Queen, and really who can blame ‘em for resenting the smug little Corgis she keeps that are comfier than most of the working classes.

LOOK. The point is, I’m spinning this again, and again, and again. The bass lines worm into your skull, latch on with tetherhooks, and drag you screaming down the asphalt. Sleaford Mods are supplying weapons of words to introverts on both sides of the Atlantic. (I’ve equipped myself with the Twitter zombie retort.) It’s up to you now to pick yr angle, pick your weapon of choice, and gather up the guts to use it. Or, at the very least, curb your ear to this dialogue, because the blokes are stoking a verbal fire storm.