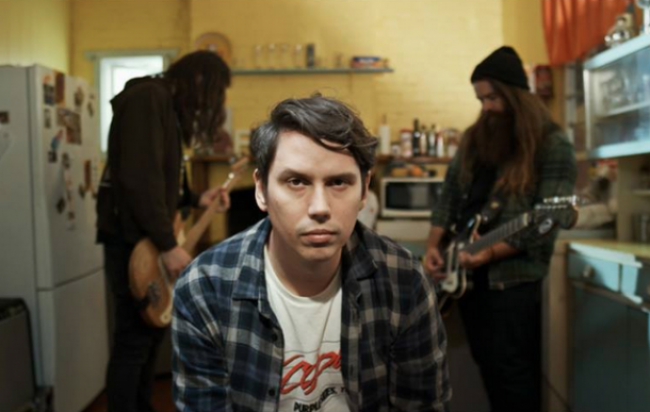 Justin Edwards: So as Jodi and I were chatting about the suddenly all-conquering Violent Soho earlier, due to being denied for reviewer/photographer spaces for any of their 3 shows at The Hi-Fi, it seems like an apt time to talk about their new single/clip. Looking through my often forgotten Flickr account recently, they’re one of my most photographed Brisbane bands since the first time I saw them at 4ZZZ’s Market Day in 2006.

I find it weird that for much of the last 10 yrs they’ve been heavily championed in Brisbane, signed to Thurston Moore’s label, recorded an album with Gil Norton at Rockfield, moved to NY for at least a year, played ATP at Les Savy Fav’s request,and yet until recently not had much attention away from Brisbane. But I guess success in Australia is more about being connected to the right people, and they are these days with party bro label I Oh You. Their latest album, Hungry Ghost is a big dumb rock album that score low in the originality stakes but is a pretty fun collection of songs, as with the rest of the releases. I think this is like the 4th song from it and would say it’s probably one of the most average songs on the album.

Cameron Smith: I would disagree with it being ‘a big dumb rock album’. i was surprised with how subtle a lot of it is. All of the best stuff on it is a lot more measured than i had expected. i always liked them as a live thing but their recordings didn’t do a lot for me until this record. The best song is the closing title track.

Lee Alexandra Adcock: “Video not available in your country.” Well, that’s pretty lame, for starters. Gonna tap into another source and report back. Judging from the given thumbnail, though, my expectations aren’t that high. That leather jacket screams “LOOK I’M TOUGH AND AUTHENTIC YO”.

Lee Alexandra Adcock: Is the “Covered in Chrome” single an adequate representation of the LP? If so, then yeah, “big dumb rock” is 100% correct. I would add “ass-backwards” and “hopelessly male”. Sounds like they’ve been guzzling Smashing Pumpkins, Nickelback, and six packs of booze simultaneously. Best to throw out on parties where the primary focus of the evening is stumbling around with yr other washed-out meathead dude friends.

Jodi Biddle: I actually love this album with a rare fierceness. I don’t know if I’d call it dumb. There’s more here than songs about hooking up and getting wasted. It is that, but it’s also being young in Brisbane and feeling disjointed, suffocated – trying to drown it out with hedonism but failing. This song isn’t my favourite; I don’t think it’s a good single choice because as an album track, it’s a nice relaxed break from the bigger riffs and screaming choruses, but on its own it’s a little flat.

Justin Edwards: The recording is probably the thing I like least about it. I think I might have had this discussion with Darragh at some point but the kick drum is way too high in the mix, about the same level of the vocals, above the guitars and to the point of irritation. Also the bass is so low it might as well not be there.

I really liked the sound of the last album, the one that Gil Norton produced. Whether or not it was equipment, microphones, rooms, experience, I don’t know, but it just sounded massive, especially the drums. Plus a few of the songs were more interesting guitar-wise and hinted at a move to something more shoegazey, which didn’t happen on Hungry Ghost, and partly why I called it big, dumb rock. Plus there’s no getting away from the fact that the chorus for ‘Covered In Chrome’, the big hit single from the album is YEAH x 15.

But I guess it’s just a single to out out as they’re touring. Having checked, think it’s actually the 5th single from it (out of 11 tracks), as there’s five video clips for songs from the album, but there’s still better songs they could have released.

Justin Edwards: As we’re on a grunge trip, maybe we should check out that new Vines song that the NME has been gushing about….

Lee Alexandra Adcock: BRING IT ON.