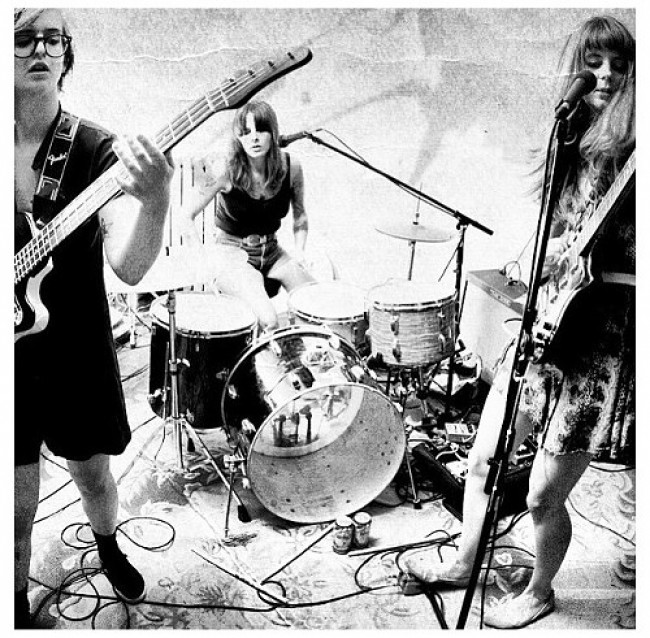 It’s been a few months since my last singles column & most of that time has been spent navigating the frightening, discouraging waters of seeking out potential bandmates in a new city. Endlessly modifying ads, searching for the magic combination of dropped names & stated influences that will hopefully catch the eyes of like-minded musical misfits. Putting out a call for women who might still be learning their instruments, emphasizing collaboration & solidarity more than skill, for a feminst post-punk band & only getting one response, which happens to be from a dude who interprets that as “Joy Division meets Joni Mitchell”. Struggling through trial band practices with boys who have an unhealthy, Brian Wilson-level obsession with dictating & controlling every part of the deluded vision for their bland indie rock songs, who take your bass from you & play a part while telling you to “just do that”, instead of giving you the chance to stumble & fuck up & slowly figure things out on your own.

Listening to new music during those trials & tribulations has been a bit of a double-edged sword. Every new single is another wake-up call that all of that time spent in front of your record player is time you could be spending trying to stumble upon your own sloppy, hesitant pop greatness in some cluttered practice space tucked away in the industrial district. There’s the giddy rush that comes along with hearing other people create noise that feels within your grasp; actually getting to hear the old “this is a chord, this is another, this is a third; now form a band” call-to-arms put in practice as opposed to an abstract idea. But there’s also the self-doubt & the twinges of envy that surface when you have nowhere to channel the inspiration that gets stirred up as you listen to a record that empowers you, that sparks your creative impulses, that makes you say “YES!”.

The debut single from Nots has been one of those records for me since it was unleashed into the world back in October. They’re a three-headed Hydra sharing DNA with some of the reigning women of the current Memphis garage-punk messthetic – Charlotte Watson & Natalie Hoffman both paid tribute to gloomy girl-group heartbreak in the (woefully overlooked) band Bake Sale, but their current projects (Manateees & Ex-Cult, respectively) are more Back From The Grave than Girls In The Garage. Joined in Nots by Laurel Ferdon (Natalie’s bandmate in yet another project, Moving Finger), they’ve sewn garage rock’s sloppy, swampy howlings to wiry, economical punk – the yelped girl-gang vocals & seesaw rhythm running throughout the blistering minute & a half of ‘Dust Red’, in particular, make them sound like the evil triplet sisters of The Urinals. No-fi meets no wave on ‘Animal’ & ‘Salesman’, with slashing echo-chamber guitar & hyperactive stuttering drums, while the short & spiky ‘Talk Show’ is skeletal Kleenex-style post-punk as banged out by beehive-haired tough girls smoking cigarettes in the high school bathroom. Hearing them kick dirt all over these four songs in under 10 minutes is more inspiring to me than hours of wasted music lessons, trying to adhere to structures & methods that I never had any intention of following. It’s singles like this that keep me from completely giving up – if it’s another six months until my next Single of the Week column, it’s because I’m still out there trying to find rebel girls who want to make this sort of don’t-give-a-fuck racket with me. But hopefully not.