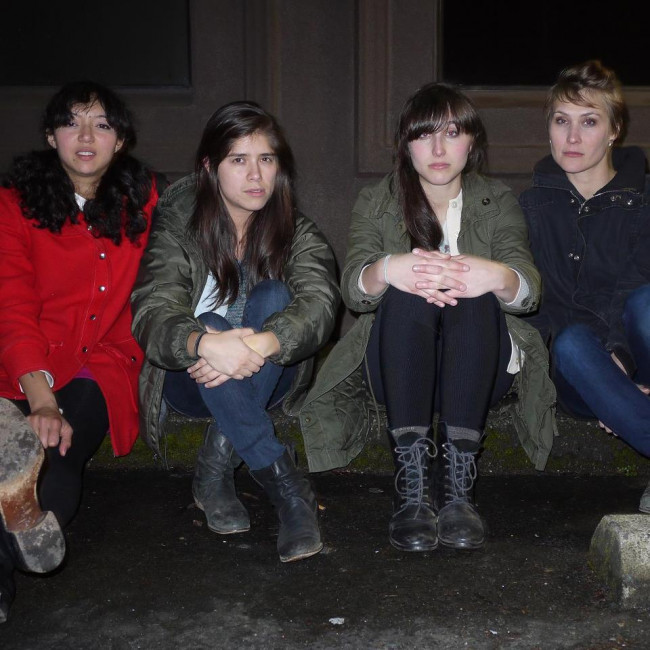 I don’t know who’s to blame for “surf-rock” becoming the new lazy descriptor for every indie rock band wrapping themselves in reverb & positive summer vibes, but I do think that a lot of people need to go back & revisit Shadowy Men On A Shadowy Planet’s ‘We’re Not A Fucking Surf Band’ for some much-needed guidance (the Canadians know what’s up).

That being said, the four ladies of Seattle’s La Luz have a definite beach blanket bingo vibe, especially if the beach in question is located somewhere in Twin Peaks with the ghosts of crackly 50s doo-wop & 60s girl-group singles echoing from someone’s AM radio. Their new 7” on Portland’s Water Wing features two songs (‘Call Me In The Day’ & ‘Easy Baby’) also found on a five song cassette EP (recorded & mixed “in a Bothell, WA trailerpark on a hot day”) that first appeared in a self-released limited edition in late 2012 and has since been reissued by Burger Records, which gives you two different opportunities to enjoy their twang & tears in pure analog.

‘Call Me In The Day’, which overlaps on both the cassette & the 7″, is a melancholy organ & tremelo drenched slowburner for your next dance at the Black Lodge. Drop this onto a compilation of obscuro misty-eyed 60s garage rock like Love Is A Sad Song or Nobody To Love & I wouldn’t bat an eye, although the role reversal of being sung by girls instead of crying about them might be a tip-off. The cassette’s stand-out jangler ‘Sure As Spring’, with a doom & gloom girl-group chorus lamenting “When you were mine, I never had the time & now I kind of want to die”, channels the spirit of The Shangri-Las’ ‘Remember (Walking In The Sand)’, if the Weiss & Ganser sisters had been armed with guitars that they could shake like Dick Dale. Slip your flask into your back pocket, ride down to the beach & have La Luz be the soundtrack to your next moonlit make-out session with the troublemaker who will inevitably break your heart.