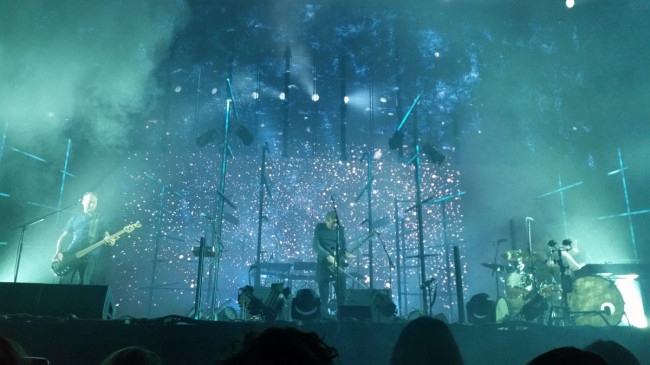 Although it’s almost five years since Sigur Rós last played in Melbourne, memories of the second ‘Harvest’ festival remain strong. Back in November 2012, Sigur Rós headlined a brilliant line up on the great lawn sprawling before the historic Werribee Mansion. That night was perfect and emotionally resonant. My partner didn’t make that festival; he was home parenting the then-four-year-old.

When Sigur Rós came to ‘Splendour’ last year, they only played Byron Bay. Believe me, I considered flying up from Melbourne but it was far too expensive for only one festival set.

This year, thankfully the ‘Splendour’ sideshows did include Sigur Rós. My partner declared, ‘I don’t care which tickets you buy… I have to go.’ I didn’t need to be told twice. I managed to purchase third row tickets on the floor, compensating for my usual dislike of the venue.

And so it is, that we arrive at Margaret Court Arena on a biting winter’s night, to be treated to ‘An evening with Sigur Rós’, a special two-set event for a devoted Melbourne audience. Aside from pub gigs, I don’t think I’ve ever had such proximity to the stage. As a stadium concert, let me tell you, it shits on Guns ’n’ Roses at the MCG last February. No big screens or pyrotechnics, just three eclectic Icelandic musical talents on stage holding the entire crowd gobsmacked.

Sigur Rós have to be the most casual stadium rockers out there. Orri silently arrives from stage right and, in darkness and without fanfare, sits at the drum kit and quietly starts. Jonsi and Goggi emerge from stage left to polite but uncertain applause. In their trademark style the music begins subtly, hauntingly, and builds.

I love a three-piece band, especially when they engulf you in such all-consuming sound. Sigur Rós are masters of this; from ambient whimsy to melodious laments to exultation, crescendos of drum and distorted bass penetrate your body. And then there’s Jonsi, his voice another instrument, unlike any male vocalist of this generation, his Icelandic and neologistic ‘Hopelandic’ indecipherable (but who cares?) and his bowed guitar reminiscent of whale song straight out of a Reykjavik fjord.

They play two sets of one hour each, opening with new track ‘Á’, and soon after ‘Glósóli’, the most pure Sigur Rós from their 2005 album ‘Takk’, so beautiful it’s almost heart stopping. New track, ‘Varða’, finishes up the first half, during which Orri and Goggi swap instruments and it’s touching to watch Goggi’s brotherly affection towards Jonsi as he sings, clasping his shoulder as he walks past to the keys. After the intermission the guys begin playing 2016’s ‘Óveður’ from behind their screen of lights, huddled around three synths.

The visuals are as fabulous as the music, including surrealistic giant heads, glacial-looking landscapes, spear-like stalactites and stalagmites, and scaffolds of monochromatic neons. My favourites are the great curtain of stars in coloured smoke that’s like an aurora, and the swirling red shapes like blood cells that could well have you imagining you’re in the blood stream of some giant of the north. Okay, I might be a bit carried away, but the sensory experience of this gig is just like that.

‘Ný Batterí’ and ‘Kveikur’ provide highlights in the second set, while the closing epic ‘Popplagið’ is its usual barrage of overwhelming sound and deep emotional response. After the ten minute finale a shirtless Orri is whisked off stage by the roadies, physically and emotionally spent. The crowd rise to stand, begging Sigur Rós to keep playing. Instead, the encore is a glaring rainbow map of Australia emblazoned with ‘Equality’ that stays as their backdrop during two rounds of bows and heartfelt goodbyes. It’s a poke at she-of-the-eponymously-named-venue and a fitting end to the incredible show we’ve been so privileged to see.