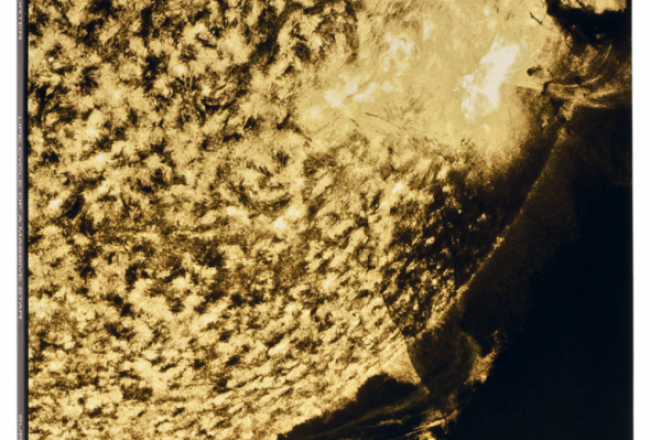 This isn’t some meditation on Hollywood levels of fame, we’re talking astronomy here. The 36 minutes long ((That’s 6 X 6. Or 12 X 3. Or 9 X 4. I imagine 6 points spaced out in the shapes of one of those jacks we used to play with when we were young, the kind you’d spin into each other, assuming the cat didn’t get to them first)) Life Cycle of a Massive Star tracks the lifespan of that titular celestial body, from formation to death through five ambient/instrumental tracks: Cloud, Gravity, Birth, Sequence, Giant.

It’s a cool idea, a way to add narrative to what is, essentially, a narrative-less genre of music. At the very least, it gets the imaginative car started and out of the garage — a good title is worth a thousand words and all that. But the execution is just so drop-dead jaw-drop stunning, it has to be heard to be believed. ((And through the magic of streaming technology and wordpress plug-ins, you can do exactly that. Which is convenient for both of us, because I don’t feel like describing/evoking the music. It’s a lot of work creatively, and thanks to the Rdio embed, it just became unnecessary.)) It’s like the best parts of the soundtrack of Cosmos and the soundtrack from Solaris, with a bit of Eno’s Apollo in there for good measure. Hell, Gravity would have been an even bigger hit, and gained a couple of notches on the emotional scale ((Didn’t it feel like the ‘dead kid’ storyline was just piling on a bit? Dramatic overkill? Or am I just that heartless? Or am I just so naturally empathetic to the suffering of others that I don’t need a dead-kid-manipulation device as motivation to root for the protagonist?)) if Cuaron had called up Roly Porter and begged to use his music.

This is some of the most evocative music you’ll ever hear. If you can’t trip on mushrooms, chase it down with a handful of adderall and convince yourself you’ve just written the greatest poem of your generation, you may as well just cut your fingers off now and feed them to the wolverines. I’d do it myself, except I did it a bunch of times 10-12 years ago and I want to give the rest of you a shot. Also, my own personal death wish burns a little less intensely than it did back in the day.

However, I may one day write a novella about a man who dies at age 36, using each minute of this record to imagine a year in his life. 36 chapters. And this one will be about a star as in the celebrity sense. The story will be beautiful. It will change my life, whether anyone else ever reads it or not. It will give meaning to meaninglessness. It will make sense of how we live and how we die, as humans in the 21st Century.

And it still won’t be anywhere near as good as its original source material. Play Life Cycle Of A Massive Star every morning for a week. If it doesn’t change the way you see the world, play it again. If after a month you haven’t gotten any results, accept that you are a corpse that someone forgot to bury.