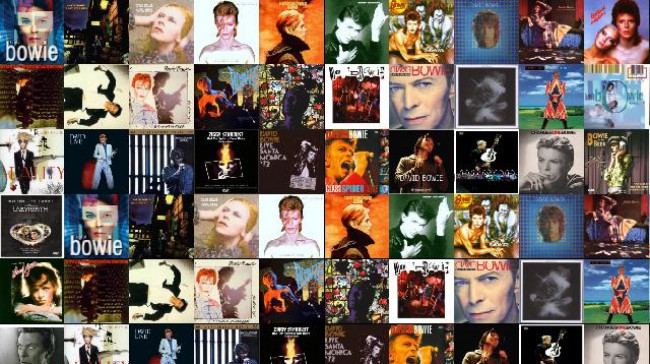 I was at primary school with a girl called Rebecca Shute. Everyone called her Rebel Rebel. It wasn’t until years later that I realised where the reference came from. The first time Bowie impressed on my life, I wasn’t even aware.

I was eight when ‘Ashes To Ashes’ came out. The video clip is a touchstone for many, it just looked like nothing else. In a pre-internet world, a pre-video world, you had to be in the right place at the right time to actually see it (most likely Top Of The Pops on a Thursday night, Saturday morning for Swap Shop). Even 35 years later, I still find something staggering about it every time I see it, and although it must be one of my most seen video clips, I still have to watch it to the end. I often think about whether kids these days still get that sense of wonder from seeing something like that that, or whether they suffer information fatigue like the rest of us.

My parents didn’t have much of a record collection (although in my teens I did find a box of 7”s in the attic from their teenage years). Two of my most vivid early music memories were the Jaws soundtrack and Diana Ross’s Greatest Hits.  My aunt and uncle were a lot more into their music than my parents when I was growing up. When I must have been about seven, my parents were away and we stayed with my aunt and uncle and can remember the sense of awe in hearing Blondie’s Parallel Lines and The Police’s Outlandos D’Amour. I often consider that this was the start of it all, this fairly ridiculous life-long affair with music. A few years later and I’m back staying at my aunt and uncle’s place and discover their copy of Hunky Dory. It was my first full experience but it’s always been one of my favourite Bowie albums. For a long time I considered The Rise and Fall of Ziggy Stardust and the Spiders from Mars to be a poor relation, it’s only probably been in the last decade that I’ve really started to love that album.

One of my key arguments against youth-orientated radio stations, like they have in Australia, and their regimented playlists, is that there’s so much music that you should be playing to 16 – 24 year olds that falls between the cracks. In terms of the Bowie catalogue, sure, classic rock stations might play the likes of ’Heroes’, Let’s Dance and Ziggy Stardust but they’re not going to touch the more weird, interesting, out-there songs and non-album tracks.

When I hit Stage 3 of the grief process yesterday, my anger was at certain major music publications (especially Rolling Stone) posting up links to every Bowie article they’ve ever published. Cashing in on page hits was undignified at the time when the sad news had only just been confirmed. It has been so uplifting and heartening to read comments and stories from people who knew, worked with, met or loved and were touched by his music first hand on social media, although I always feel irritated at the storifying of events like this, an excuse for cheap copy/paste content that de-personalises the whole thing.

There’s obviously been the posting and re-linking to best songs lists. Every one I’ve seen so far has fallen into one of two categories: they either stop at 1983 or they have a roughly decade long gap between 1986 and 1997. The Independent’s ten best songs even manages includes ‘Dancing In The Streets’, which is utterly incomprehensible.

Two of my favourite Bowie albums come from this ignored decade; 1.Outside and Tin Machine. If I had to list my five most-played Bowie albums, it would include those two, plus Station To Station (likely to be at No.1), Hunky Dory and Ziggy Stardust. 1.Outside confirms what we already knew, that Bowie + Eno = genius. Every album Bowie has put out since 1980 is described by reviewers as ‘the best since Scary Monsters but 1.Outside was the real deal and the best solo album he released in the last 35 years. Experimental, flirty with industrial sounds and textures, weird short improvised pieces combined with some fantastic singles and fully formed songs.

By some strange quirk of fate, the first Tin Machine album must have been the first contemporary Bowie I bought. Despite the album’s reputation, it received positive reviews when it was released, hence why I bought it. Those were the days when you had to make use of an artist’s reputation, written reviews and a lead single to help you chose where to spend your precious money.  I reckon that being a Bowie album influence by the Pixies and Sonic Youth has played a part in its public perception downfall: too difficult for the people who grew up on 1980s pop Bowie, too try hard for the people listening to 1980s alternative music. One widespread complaint is that the guitars are too ‘widdly widdly’, or as I like to call it ‘technically proficient’. It’s almost as if people had never heard Robert Fripp or Adrian Belew’s playing on earlier Bowie records. It’s not a perfect record, the title track is a stinker, but it also showcases Bowie singing and lyric writing at his very best. It’s a noisy, cacophonous, back-to-basics return to form, with guitars at the fore. It’s such a shame that bar a few standouts (‘Goodbye Mr Ed’, ‘Shopping For Girls’, ‘You Belong In Rock N Roll’), the second album was so poor. The second album deserves the perceived Tin Machine reputation that the first album doesn’t.

I saw Bowie twice. The first time was at Phoenix Festival in 1996. It was probably the best festival line-up I’ve ever been to, one that would still blow people away if you were to recreate it today. It was good but from memory he really played around with the arrangements to suit his current sound and the setlist was heavy on his latest album, the aforementioned 1.Outside, but one yet to make its long-standing impression on me.

The second time was his headline spot at Glastonbury 2000. It’s become recognised as one the great performances and it’s impossible to disagree with that assertion. It’s always been one of my very favourite shows, a joyous celebration of the Best of Bowie, a near-perfect setlist, heavy on Station To Station, and the bonus of the unexpected ‘Absolute Beginners’.

Twenty four hours later it all still seems a bit unbelievable. Every year we say that they year was a great year for music, and it’s true that in any year there will be any number of good songs, good albums and interesting artists and yet I can’t not be depressed to think that it is very unlikely that there will be another artist that comes anywhere near to matching Bowie in our future. No one is going to produce a body of work that has such a massive cross-generational and cross-musical genre impact, and that’s not even taking into account his influence outside of music.

I guess, as that well-shared tweet said, if you’re ever sad, just remember the world is 4.543 billion years old and you somehow managed to exist at the same time as David Bowie.  There might not be any new music  to come (although given the amount of aborted projects he’s started but never finished, who knows) but there’s a lifetime of songs that are never going to get old.