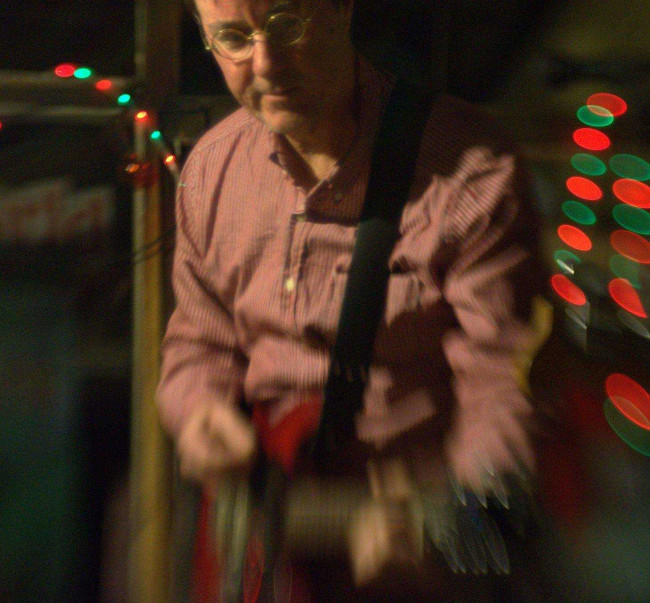 First up, I got to see this guy perform live – and I seriously was not expecting that.

There’s no blood but the intensity of the emotion reminds me of early Neubauten or Nina Simone or someone: he has a trunk full of effects and delay and distortion pedals, and he’s not scared to use them. He blows crazy shit across a shaped plate of glass for 20 or 30 minutes or so, and it’s crazy shit good – so good, that when he started I figured Nicola had slipped on an extraordinarily loud noise tape and I could not quite understand why everyone was crowding around the ‘stage’. (Stages don’t actually exist per se at Real Bad Music. The toilet now looks about 300 times more disgusting than this.)

The noise is incredible – and when I type ‘noise’, I mean layers of sound, texture, understanding, dissonant harmony. Really incredible. I never was much one for guitar shredding or extended drum fills or virtuoso vocal acrobatics, but it seems the one thing that will really get my pulse racing is some glass shredding. Seriously. This is body-expanding. Sometimes I’m laughing out loud at the nerve and brilliance of it. Sometimes, I just want to fuck shit up (plus ça change). Halfway across it bothers me that few people are dancing amid the ruins but then I figure they too are too stupefied.

Justice tells me afterwards that he can’t get booked no more: this is only his second performance this year. Man, this man should be headlining the fucking Sydney Opera House. He’s a fucking MASTER or MISTRESS, or have it what you will, of his chosen instrument. I feel the same empathy towards his music that others doubtless feel for fucking Kevin Shields. (Not literally fucking Kevin Shields, you understand – though maybe some feel that too.) He can’t get booked cos he’s an experimental artist – frequently gets called a ‘performance artist’, much to his disgust – and so he’s meant to be always switching around, trying out new ideas and forms, not concentrate for several years on becoming the world’s leading glass shredder. (There might be others, sure. Send ’em my way if so. Please.)

He says he likes to perform with drums and piano. That, I would love to hear.

I perform with Brisbane underground sweethearts The 16th Century. The band are fine: the singer’s worth debatable. I dunno. It’s good, but I’m disappointed that I can’t perform just once without recourse to profanity. Nice Lou Reed-style riffs and melodies. The occasional flash of (negative) insight and (negative) love songs. Once more, I am swamped afterwards with offers of casual sex or even a shared cigarette from no one. Thursday’s one practice (where we wrote every song first take) was Apartments-like in its jangle and sweet pop heart. Tonight, I lose my voice fifth song in.

This other Brisbane band from the 80s performs too. Eugene And The Egg. A timely reminder of what the 80s were like. Slap bass. Shoulder pads. Strained vocals that are part post-Stooges and part post-ELP. One suitably ‘atmospheric’ song about suicide, another about ‘nothing’. This is actually what we started the punk wars for, but they seem like real nice guys,and they’re playing some real bad music at Real Bad Music and so no one heckles cos man don’t we all just fucking love one another these days?

There’s an (unnamed) duo. Students, most likely. Dude sitting down playing acoustic guitar, dude sitting down playing electric guitar. One dude has the sort of voice that other dudes go for – smoky, deep, sensually motivated – but not this dude. I want to sing ‘I Shall Be Released’ over a Red House Painters song loudly to their final number, but don’t. It’s all a bit musically accomplished for me. Not that that’s a bad thing, of course. And, I mean, man don’t we all just fucking love one another these days? So I think of this, cos I like it.

Yep. And this dude plays too. He’s a real sweetheart. Works in the state library at Hobart alongside the mighty Julian Teakle. Might freak you out a little if you see him play live and aren’t prepared. Might not. I enjoy this song any amount.

He is like. Well he is like some dude from some unjustly overlooked early 80s Brisbane band who were way at odds with all the covers bands and prog leftovers bands (see above) and even punk bands, and used to forge their own path, quite separate. (I’m projecting here.) The dude reminds me of the sort of dude who I might well have met, humming quietly at a table at a TV Personalities gig in 1982. His songs (with some wicked, minimal Mo Tucker-inspired drumming) remind me of Lou Reed some, Jad Fair some, something else and a fraction alien to me some. (That will be underground Australia, 1983 then.) Would be nice to see a few females in the line-up, would have rounded everything out nicely. Some great heckling of the fill-in bassist, though. Throws him so much, he leaves the stage at one point, hands over his bass. So yeah… a little bit Reed, a little bit Fair, a little bit Treacy, a little bit his own little bit…. a fine set.