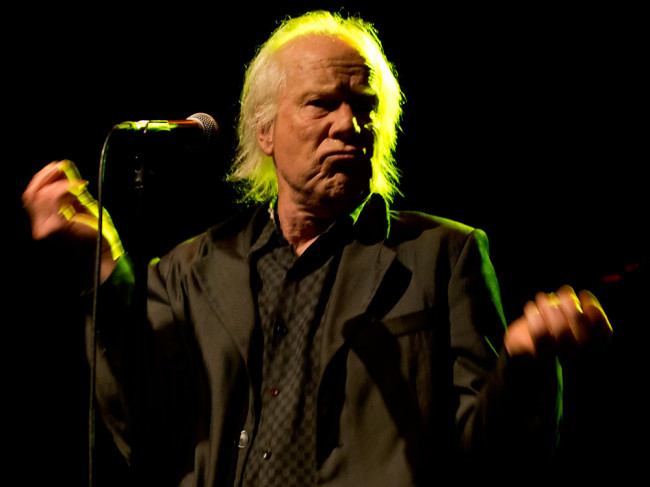 My first Radio Birdman experience was at the Golden Plains Festival in Meredith, Victoria back in 2015.

I didn’t know much about them at the time. My friend Warren used to bang about them all the time. It seemed that their main guy, Deniz Tek, was some sort of modern day renaissance man, who could not only play scintillating guitar lines in a post-Stooges/pre-pub rock Australian punk band, but also moonlighted as a fighter pilot in the US air force as well as a medical doctor on the north coast of New South Wales. I was like ‘Yeah Warren, whatever, you say the same about Anton Newcombe as well.’

I later found out that all which Warren was talking about was 100% true.

Anyway, beyond knowing they were worshipped by dudes in their mid-forties, usually from Sydney, I was pretty oblivious to the importance of Radio Birdman up until I saw them play the stage at Meredith, where they proceeded to tear down my previous ignorance and replace it with a gawking fan boy fanaticism that continues to this day.

Their Golden Plains performance was my favourite of that festival. I was eager to see them again, and having missed their Brisbane tour last year, I was very glad they’d elected to tour Brisbane again (this time with Died Pretty), ostensibly promoting the release of an upcoming documentary focusing on their career, ‘Descent into the Maelstrom’ that is hitting cinemas any day now.

But it was almost not to be.

You see, at 8:30pm I was at Brisbane Gallery of Modern Art having just come out of watching GROUPER (whose performance was a mixture of average and blissful), I checked the Facebook event of the gig, assuming I had plenty of time to make it to the Tivoli. Holy shite! Radio Birdman start at 8:45pm, with Died Pretty headlining later. I guess they’re catering to folks tonight who like to see bed before midnight. I’m all for early gigs personally, but I’d had assumed incorrectly that they were running on the usual Brisbane punk time, where a band scheduled for 10pm doesn’t get on stage til 11pm.

Somehow I managed to make it to the Tivoli by 8:45. The place is jammed with people who looked like they partied way to hard two decades ago and the bars are heaving, ten people deep. Perhaps since none of us can afford homes anymore so decide to sink all our disposable income into beer and punk rock nowadays?

Rob Younger, Tek and the rest of the band enter and immediately jump into the excellent and somewhat unexpected cover of the 13th Floor Elevators song ‘You’re Going to Miss Me’. “No, no, no, no!”, Younger screeches and then ‘Do the Pop’ – probably my favourite Birdman song – immediately follows. That guitar solo!

While a slightly comical Younger flails around front of stage, trying to recapture the dance moves of his early twenties, my eyes are drawn to the almost mechanical bass playing of Jim Dickson, who holds this brilliant set together nicely.

Radio Birdman cover most of their catalogue, including ‘Descent into the Maelstrom’, the soulful ‘Man with Golden Helmet’, ‘Murder City Nights’ and capping off the main set with the brutal ‘New Race’. Around me the ground is littered with beer cans. People are having fun.

The perfunctory stage absence post set is met with the crowd baying for more and the band concede, coming back to play the brilliant ‘Aloha Steve and Danno’ followed by a cover of ‘TV Eye’, by their familiar ancestors, The Stooges. The band are great tonight and I can’t help but think how awesome their shows would have been back in late 70s suburban Sydney.

Died Pretty headline tonight. I’ll freely admit here was a band I legitimately knew little about, except that front man Ron Peno looks slightly terrifying. I tried to cram as much listening in the few days before the gig, picking up on the obvious Echo and the Bunnymen threads in their late 1980s records, often tinged with a douse of early R.E.M.

The band start out with a powerful version of ‘Just Skin’ from 1986’s Free Dirt, ‘Disaster’ from Doughboy Hollow also features early on. Peno roams like a deranged priest high on a mix of stimulants. It’s obvious he’s a consummate entertainer with years of experience under his belt. Was this the status quo before shoegaze?

I run into a former work colleague who I had no idea was remotely interested in music, and he confesses his undying affection for Died Pretty, which he tells me sound great on record, but illuminating live. And as a relative newbie, I think they’re pretty convincing, a late set play through of ‘Godbless’ proves to me  that it would have been a pretty ridiculous idea to leave after Radio Birdman, which, insanely, had been my tentative plan all night.

A three song encore follows the main proceedings, culminating with an epic rendition of ‘Desperate Hours’. The band shuffle off, the lights come on, the shared drunken appreciation revealed in the applause and whistles of the jammed Tivoli. The ritual spilling into the streets begins again.