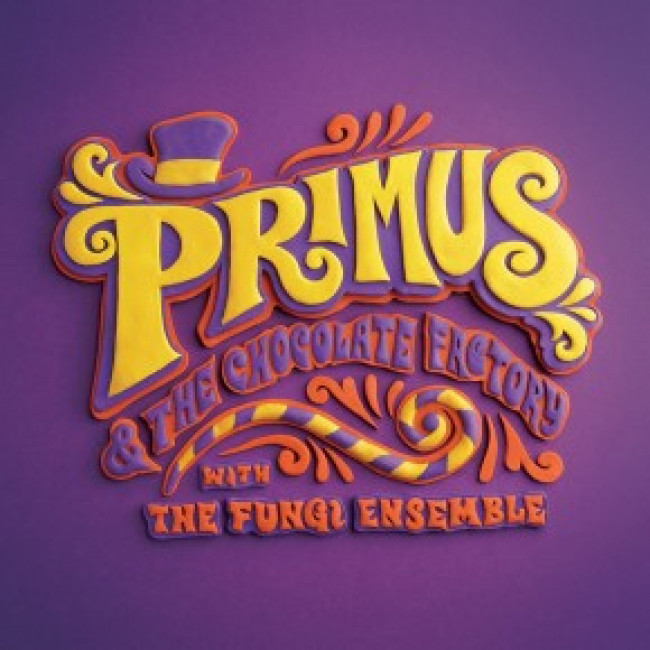 A few weeks back, a plastic jar of gobstoppers arrived at the record store with all the usual promo parcels. Came with some rich, velvety-colored storybook banners which even the resident graphic designed doffed his (non-existent) hat to. Spot color inks, he said.

Now, we’ve gone over this a hundred times – I’m still a hack. I pulled Primus out of the queue not because I know the dudes, but only because they had the gall to send out candy jars with their name emblazoned on ’em. [Note – last I checked, ours sits by its lonesome self by the window, beyond the reach and gaze of record buyers.]

So, yes. The blokes have covered the entire soundtrack to Willy Wonka and the Chocolate Factory. Gimmicky, you might say, like the Flaming Lips’ zealous attempts to one-up sacred cows like the Stone Roses and the Beatles. But THOSE projects are the result of endless rewiring, re-jiggering, recoding, reprocessing, etc., until only the faintest bits of the pastoral remain, and the rest is slick and ultramodern and cold. (I’ll expand on this in a later post. Turns out Everett True’s response ISN’T the only Flaming Lips review you’ll ever need.)

Put it this way. Wayne and his fwends tried to impress us with flash and bang. Primus, on the other hand, just wanna crack us up.

Man, this is one helluva riot. For once, it’s almost too short – just when you’ve aligned yerself with the madcap Beefheart acrobatics and Resident-ial quirky moodiness and Claypool’s deranged method acting, the end credits roll onto the screen. It’s a tight little creation, astonishingly clearer and clearer with each replay, and with a symmetry so rigid that ya might call it logic.

“The Fungi Ensemble” credit refers to a hidden crew of extras, like vibraphones and violins and trumpets, which open up this wondrously kitsch world of delicious textures. The Oompa Loompa segments (true to the movie, there are four of them) lumber into view like lost Rain Dogs,/em> cuts (just w/o raspy Mr. Waits); “Cheer Up Charlie” strikes a clattering balance between tender and goofy, with tiptoeing rhythm that keeps ya on yr feet; the truly bizarre “I Want It Now” waltzes around the bullring whilst spon-on snotty vocals whine out orders. And I have no idea where “The Wonkmobile” came from, save from fuzzy horned snarling munchkins.

And this all reflects another surprise about & the Choc: it ain’t all about the bass. Don’t get me wrong, though – half the delight of the gigglishly sneaky “Candy Man” cover is that dark moaaaaaaan. And yeh, the way Claypool draws lines like ”he makes the world taste pretty dang good cracks me up every time.

At any rate, though Claypool’s cut back on the bass-slapping here, his nimble shenanigans drive the LP’s standouts. I love how “Golden Ticket” skips along, just as a song about winning a trip to Willy Wonka’s factory should skip along, but also just as it shouldn’t.

Ditto for “Pure Imagination”, which evokes both swirly Hitchcock dream sequences and the Twilight Zone…and by that, I mean both the world beyond space and time AND the Golden Earring tune of the same name.

If ya REALLY wanna feel a jolt, though, then jump halfway through to the “Semi-Wondrous Boat Trip”, a creepy canal of tingly xylophone and restless ghouls that lurches from Zappa to Beefheart in 30 seconds flat – THE BLIMP! THE BLIMP! – before crashing to the silliest halt.

Yes indeedy, folks. Primus succeed for me where the Lips failed – cos let’s face it, Sgt. Pepper and Willy Wonka were both Technicolor loony toons, but Wayne and his Fwends wiped that folksy wackiness clean outta the Beatles. Primus kept it all in tact. And maybe that’ll grind your nerves until you stand up all huffy and sit at another table in the lunchroom. Fine. The weirdos have more fun, anyway.