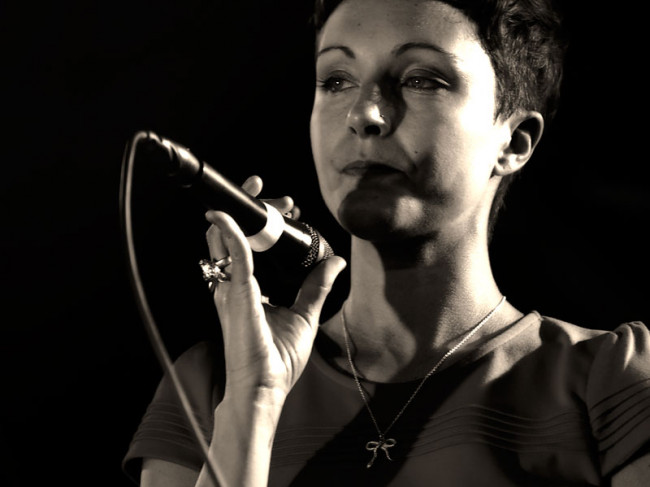 I spent the first few minutes of Polica’s set at the Melbourne Recital Centre wondering whether or not this whole ‘sitting down’ thing was going to work for a band that, as I understood them, thumped and grooved enough in a way that might warrant a little boogie.

Sitting down seems so academic, so chin scratching; but something about Polica’s layered and theatrical electronic pop doesn’t really lose anything in the seated position. You don’t have to sweat to feel this stuff, if anything, like a Pixar movie soaked in colour and emotion it helps to just sit back and let it wash over you.

It also helps that the Recital Centre probably has the best acoustics and sound of any venue I’ve watched a ‘regular band’ play in – this is no muddled wall of sound like what we got from places like Festival Hall; the wooden curvatures of the Centre’s internals and the dynamics of the audio equipment worked well to bring Polica to life.

They’re mostly playing stuff off of their new record, United Crushers, which is a beautiful album of electronica positively exploding with emotion and ambition within in a sea of bland production and emotionless vocal performances being churned out by other groups working today.

Channy Leaneagh, the incredible vocalist she is, also makes up for the lack of movement within the crowd with her own energy and expressions, as though these weren’t just songs, but scenes in a stage play. She’s at times a dancer in motion, or wounded lover, and at others a confident joyful spark harnessing the rhythms of the dual drummers. She apologises near the end of the show for a sick throat or something to that effect, but it’s not warranted at all.

Jaala, who opened the show by the way, stayed true to the tight time signature skipping nature of their debut Hard Hold, bouncing through the warbling indie rock tunes with ease, with frontwoman Cosi remarking at one point “I think this is the nicest place I’ve been in”; too true Cosi, you and me both.