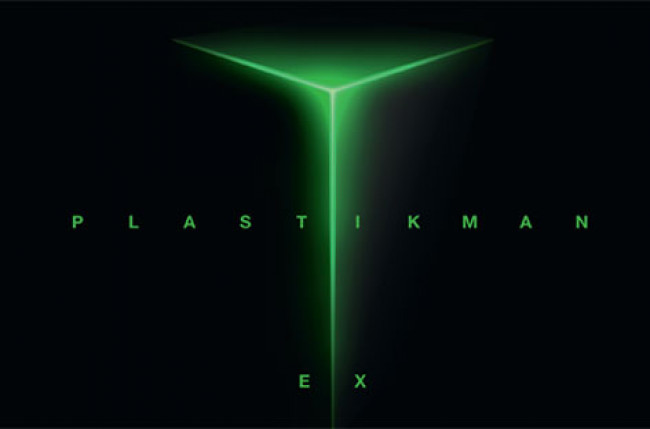 You know what? I’m-a gonna lift this straight out of the press release.

Plastikman, aka Richie Hawtin recorded “EX” at the Guggenheim, New York’s iconic art museum. This very special performance was at the invitation of influential Belgium fashion designer and artistic director at Dior, Raf Simons, for the Guggenheim’s annual fundraiser, performed around a specially constructed LED obelisk.

Now, I could stop right there. But I’m a music critic, not a Buzzfeed writer, and so allow me to elucidate. Besides, though “designer-museum techno” sounds hopelessly high-brow, Plastikman’s a paternal type we can trust to steer us away from that nesting ground of cliché, the dance floor.

You can skim the blank and icy mirror surface of EX and walk away underwhelmed – but then, we must remind ourselves that folks must’ve tried to cruise down the Autobahn and abhorred the hypnosis induced by line after line. And still others have likely tried to slip into a Tangerine Dream while holding on fiercely to their sense of place and time, refusing to embrace its trance. If you’re one of those folk, then on behalf of Plastikman, I ask you to quietly leave the premises. Go find yr rock and roll show elsewhere.

The listener can’t quite tease out one track from the next without watching the readouts – shifts occur not in new melodies, or not even new textures, but in energy. And that sounds lame, but seriously – the pulse, the keystone of techno, serves here not as an impetus to move, but as a conductor of mood. The first track brings it in; the second holds it back; the third drops it sparingly. White space and rhythm hold equal sway here.

See, Plastikman’s one of the sculptor producers. The fourth track, “EXtrude”, isn’t just a snarling spitting coiling viper; it’s a careful construction, onyx cogs churning in a steely stopwatch. Even the jamming, the squeaks of the rusty gears – everything’s timed, positioned just where it should be, balancing free flow and shuddering stall in a chiaroscuro of sound.

But I can’t stress enough the vast amount of BLANK, the stunning vacuums that set this far apart from four-to-the-floor jungle massacres. No drops allowed, either – let the showboaters keep that deuce in their pockets, that sucking tot that swallows up heaps of unfettered flack just to belch it out again. I mean, on-the-fly orgasims are fine, really, but that’s artificial space. An illusion of emptiness. A period between run-on sentences. EX contains the breadths between stars, the absence of mass that ancient philosophers swore up and down did not and could not exist.

“EXpire”, itself a natural growth from “EXplore”, floats away from the heartbeat life throb of Earth and pings out to the universe. Y’know, nearly eight years ago, there was a program that pooled computing power from others’ PCs to search for life forms elsewhere in the great cosmos. To my knowledge, that search was fruitless – all my brother and I ever saw, anyway, was a running count of…something. (I never quite understood how the thingy worked.) Maybe Plastikman’s search yields nothing, too, but the radar of “EXpire” does at least pick up much more scintillating signals than just data counters.

Somewhere out there, anyway, still hangs The Man Machine satellite that Kraftwerk sent out over three decades ago. Ping. Ping. Plastikman beams out the signal from his LED obelisk to a pocked and hollow aluminum hunk. This is Richie from the Guggenheim. Is anyone there? Over. (over, over, over…)