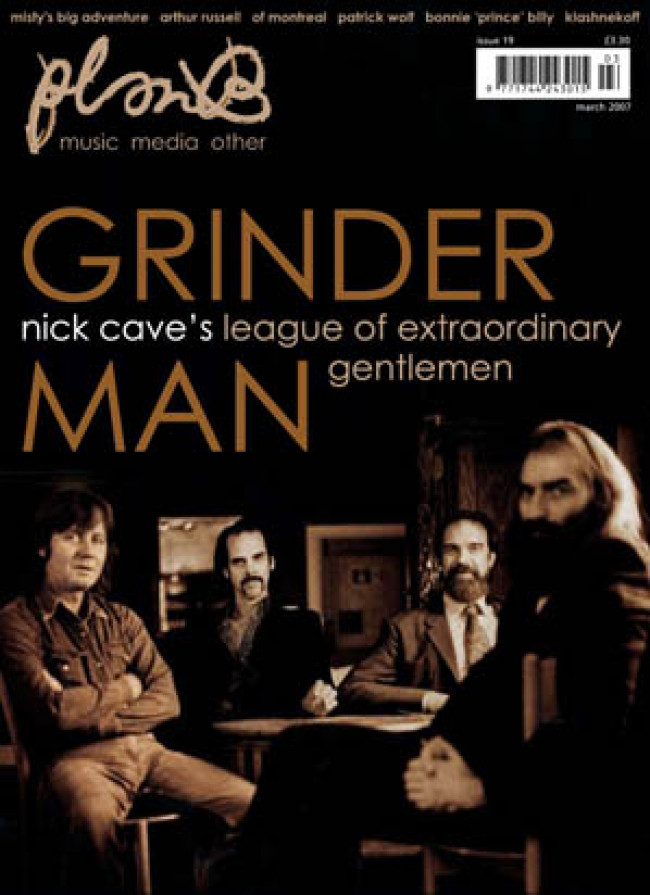 Arrived at this via something Jake unearthed. I’m not entirely sure what exactly it is he’s unearthed, but it sure looks mighty interesting. The following (co-written by myself and Frances May Morgan) was composed in direct response to an article in The Word magazine, The Rise of the Indie Hottie, and its wording was drawn directly from the source.

This month’s Plan B is a testament to the wave of hugely talented men who are poised to take hold of the music scene in 2007. From Nick Cave to Patrick Wolf to Grandmaster Gareth, they’ve brought new energy to a scene dominated by females. Plan B has always looked to the future, and we see a future where men are making music on equal terms with their female counterparts. What the critics are already calling ‘malecore’ is the music of tomorrow. A bold statement? We think not.

We’re proud to present our first annual ‘Men In Rock’ issue, the same way we’re proud to feature so many special individuals in our pages: just because they look a little rough and don’t like to wear eyeliner doesn’t mean they can’t make great music. No, don’t call us sexist! This is no token gesture on the part of the Plan B editorial team: we plan to feature more and more men within these pages as more and more men make great records. All of our main stars this month are living proof that you can still rock a crowd when you’re wearing a shirt and a tie, a hoodie, or even a nice pair of corduroy britches.

While newspaper critics herald the ‘female invasion’ of music, even suggesting that women have the evolutionary upper hand because they’re “in tune with their feelings” and “less afraid to be candid about human frailty” (Observer Music Monthly), Plan B takes a stand against such lazy essentialism. After all, who could accuse the elfin Patrick Wolf, the heartbreaking Arthur Russell, the none-more-confessional Of Montreal or even the sensitive brutes of Grinderman of being out of touch with their more vulnerable side? Or fail to see the ‘human frailty’ in the lyrics of both Bonnie ‘Prince’ Billy and Klashnekoff?

What really amazed us when we put together this issue was how awesomely different men are from one another. In fact, it seems almost insulting to group them all together just because they’ve got cocks and make music. Nonetheless, we hope they appreciate our support.

Normal service will be resumed next month.
The Plan B Editors

One Response to Plan B Magazine #19 editorial