Pinkshinyultrablast – Everything Else Matters (Shelflife) 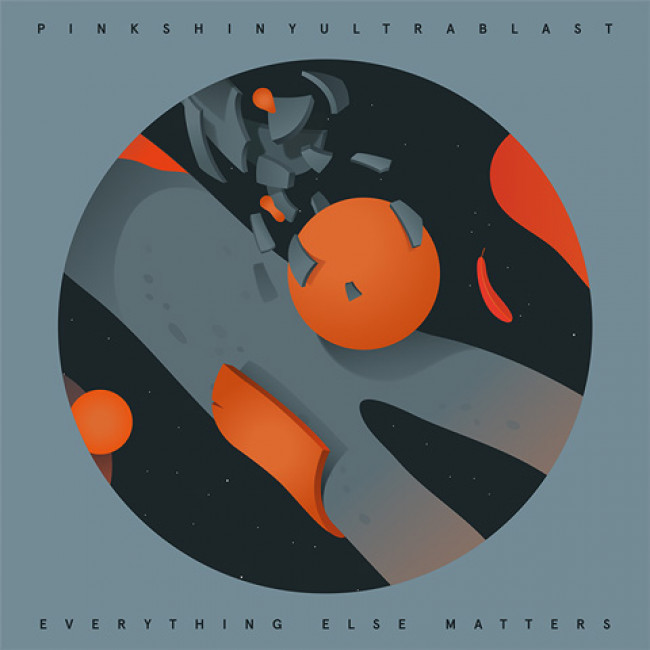 Hold on. Slow down a minute. Don’t rise to the stars just yet.

Should place matter? Should we be amazed that something this heaven-bound launched from the wintery heart of Russia? Or should we concede that Pinkshinyultrablast sound like the sun-kissed aftermath of the Horrors after they rebuilt their strange house into a glass cathedral?

We could, but that’d be the easy way out. And you know me – I prefer to take the long route, and hack low-hanging branches out of the way if I have to.

Besides, we’d then overlook the rippling light and gentle glow of the intro, the first half of the six-plus minute long “Wish You Were”. It’s the one reflecting pool in the whole lot, a sparkling wheel of faux-organs turning and chiming in a summer’s breeze, before the band slam down the post-rock lever and careen into familiar stratospheres. Mind you, I haven’t heard a God Is An Astronaut album in years, but I reckon Pinkshiny do broach that territory halfway in, and don’t stray far from there for the duration of the album. And yes, I suggest this as a derogatory point, a by-the-numbers approach to the cosmos, like those five-minute launches into outer space that Virgin wants to market to the general public.

That intro, though…it borrows some other solstice, but not one I can easily name. I’m blanking out here. Slow down. Stop. Stay on Earth for just three more minutes.

This is what distresses me about Pinkshiny. See, they almost touch on another sylvan parallel world in the first 30 seconds of “Metamorphosis” – but then the bass gallops the band into a commercially viable overdrive, with head-on riff clashes straight from the Manchester Orchestra playbook of indie rock. And let’s not forget the astral plane strain of zoned-out guitar solo that highlight any proper Ride-affected shoegaze.

Now, yes, I hear you – originality is impossible these days, Lee, and you’re asking for too much again. Indeed, but when so many elements ring so many bells – the skipping drum beats, the Beth Fraser garden variety of vocals, the routine ethereal feedback – we do need to furrow our brows.

That doesn’t render Everything Else Matters as an impossible bore. I’ve tried, several times, to enjoy the smothering blanket of Slowdive’s Souvlaki, and each time I’ve had to toss it before I collapsed into slumber. This, at least, offers enough smoothie-blended flavors and loop-de-loop turns to keep me locked in to the end. Odd, though, how much the eased-back locked bass grooves (especially on “Holy Forest”) don’t move me. I thought I liked that sharp, too-scared-to-dance vibe, even if disheveled new post-punk suits like Editors and Bloc Party and Crystal Stilts have dipped one too many times into that sauce. Or is it precisely because so many indie male acts have hung their success on THAT sound, and Pinkshiny had to pin their star-bound exploits down on such well-trod ground?

And yet. I catch these moments, glints of gold in the air once the dazzling lime lights fade. The reined-back snarl of “Glitter”, the syncopated shooting stars that cascade on the twinkling “Umi”, the dancing will o’ wisps and immense drifting drone at the end of closer “Marigold”…oh, man. That. See, chasms like this yawn open every now and then within a debut (see Luxembourg Signal, for instance), but you’ve got to clear the underbrush to find ‘em.

(By the by – this sucker will be out January 27th, and you can pre-order it here.)

2 Responses to Pinkshinyultrablast – Everything Else Matters (Shelflife)