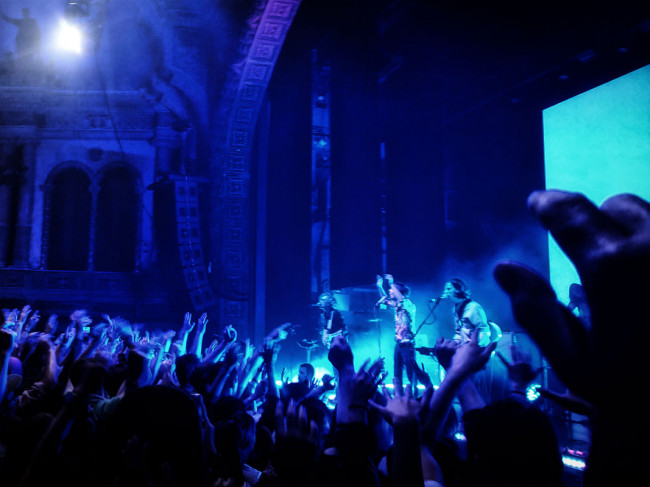 Jeez louise – Phoenix have been around for a while. Having released their debut record United back in 2000, they’re coming up on 20 years as a commercial band – reading into it a little more they smashed that barrier last year since they technically formed in ‘97.

A lot of people my age would associate them with the unbridled youthfulness of late high school, after their fourth record Wolfgang Amadeus Phoenix catapulted them into the hearts of indie kids across the world. Phoenix not only hit on a ‘sound for the times’ with that record, but also broken into the glitzy high-production value future that indie pop had started constructing for itself; crafting a tone that has endured throughout their albums since 2009.

That tone? Absolute gratification – and it’s nowhere more obvious than their live performances. Phoenix sorta show their age by performing with the sole purpose of having fun. Unlike many independent artists currently working, there’s no overarching message, no shallow world-weariness a la Father John Misty nor lyrical empowerment of any variety; just simple unity of joy. It’s refreshing.

A giant LED screen behind them explodes with block colours at the open of ‘J-Boy’, and by the fourth song we’ve already had a tour of the last nine years of Phoenix’s life, the opener leading straight into ‘Lasso’ followed by ‘Entertainment‘ & ‘Lisztomania‘ – a barrage of colour and energy.

The band themselves are no different. Thomas Mars is possibly the most grateful frontman I’ve seen – during the encore he’s touring the Forum concert hall, up along the back of the room, thanking everyone for coming. On stage he’s as possessed by the music as the punters – stamping around to the beat and skipping in moments of airy pop bliss all the same. There is no sense of holding back at any point, even when the tone turns somewhat sombre, such as ‘Rome’.

There’s something to be said also for the sheer enjoyment you can see on the faces of the band. After all this time they still revel in the particulars. Guitarist Christian Mazzalai is affixed to the crowd, beaming as though it were his first show. Mazzalai and Mars take a moment during the encore to play ‘Goodbye Soleil’, and an off set-list addition ‘Countdown’ – Mars sits on the crowd barrier, sharing a moment with the room; “true and everlasting, that’s what you want”. It’s actually pretty beautiful. Bassist Deck D’arcy actually takes Mazzalai aside before they close out the show and pats him on the back, “wonderful” I can see him saying.

Phoenix perform their near-20 year catalogue with the energy of a debut band. The gratification of these songs is near infinite, and when performed in such a concentrated pill of joy, it’s almost too much.