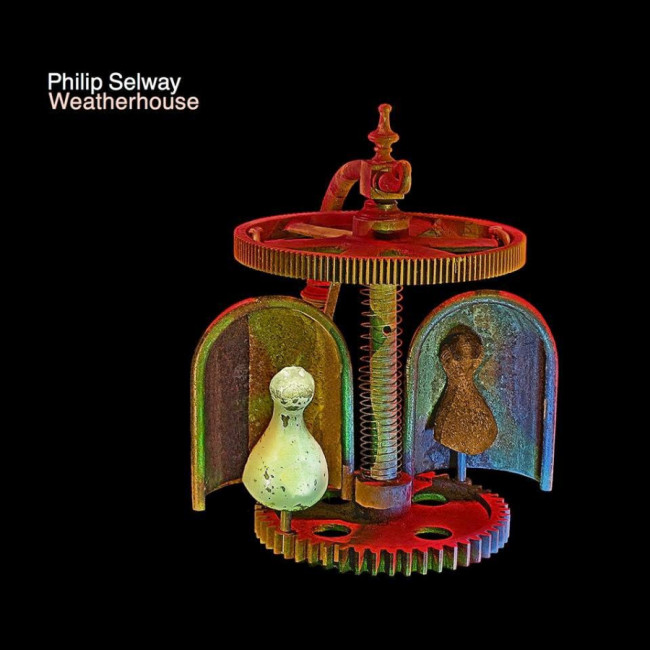 Open mind and ears, I swore to myself before diving into Weatherhouse. Never mind that Philip Selway hails from the obelisk contingency that is Radiohead.

Let’s isolate this thing, then. An ordinary ancestral manor in the shady and ever-shifting landscape populated by pop music. High ceilings, high windows. A large study with a wall of books, inherited from the previous owner, two-thirds of which the current owner has never touched. An observatory with a brass telescope, also passed down, and also never used, save as a conversation piece.

Mind, it’s all very lovely. No touching, though.

See, here’s what I’m thinking (-ing, because I’m still working through my opinion, see – putting words to the screen hacks the amoeba into shape) – on the one hand, Selway shows off plenty marvelous examples of architecture: the great iron gate of “Coming Up For Air”, the glasshouse of “Around Again”. Sighing violins, lingering vocals, big choruses, strained guitars, crystalline armonica.

No doubt, you’ve got to sit down in the Weatherhouse. Never dress fancy for an Arcade Fire concert – save your stylish duds for Selway. Imagine the cocktail waitresses flitting by as the gentle xylophones tap into place, as the muted acoustic line moseys underneath, as Selway ooooohs and whispers reverently. Actually, I’m referring to one of the better moments here, “Waiting On A Sign” – better, I say, because it’s quiet, and not grasping for (too much) attention. Also, whooshy noises suck it into oblivion at the end, which I dig. Selway tries to work in these disruptions throughout, but rarely do they succeed in disrupting

Which leads me to the other hand: Selway didn’t build this Weatherhouse.

(You see a projector in this room. You turn it on, and an image of Radiohead’s Hail to the Thief lights up the wall, in all its blocky color-ness. Walk through the wall?)

Flashback. 2009. I leafed through a collection of CD-Rs from a bud in college and stumbled upon Hail To The Thief – and I don’t know why it stuck out, why I wanted to borrow that one, but I did. And I had to type in all the titles myself, including the bracketed ones. Everything about it sounded strange, alien, even before I ever heard a note, from a future way more bleak than my entire library of inherited classic rock stuffs. And then I heard it, and that sucker punched me. You mean guitars could do that? What are these bleepy boppy sounds that don’t rock at all, but fascinate me anyway? Who is this banshee man, and is he OK? Am I OK? Where is this twilight world of werewolves and red skies and scrapped wire that this transmission pulses from, and how do I get there? I heard “courageous” cascading at the end of “Sit Down, Stand Up” and felt hammered by irony.

What am I getting at? I believe Weatherhouse is an ordinary house. Stately, grand, but no magic projectors. No alternate worlds to explore. Just read the tracklist out loud, and try to conjure an image. “Miles Away.” “Let It Go.” “Drawn To The Light”. Indeed, a gilded sheen glazes over the thing – any side alleys Selway tries to explore are smothered by inane words and a thick white glow.

“It Will End In Tears”, for instance, is not 4AD-ish at all. About as generic a “hello, former lover” breakup song as one could possibly conceive. And it doesn’t end in tears. Rather, smiling chorus boys in snowy white robes warble from the rafters. Yeah. Ivo would cringe in the light.

I do like that “Waiting For A Sign”, though, smiley crystal morning light that it is. I dunno. It’s music like this that tests me – the stuff that could sparkle from one angle, fizz out in another. Am I really too harsh? Fogged by the past? Violins float down like paper planes as the album winds down, and I do wonder indeed. Lovely, yes. But disorienting, no. I feel nothing except my head nodding.