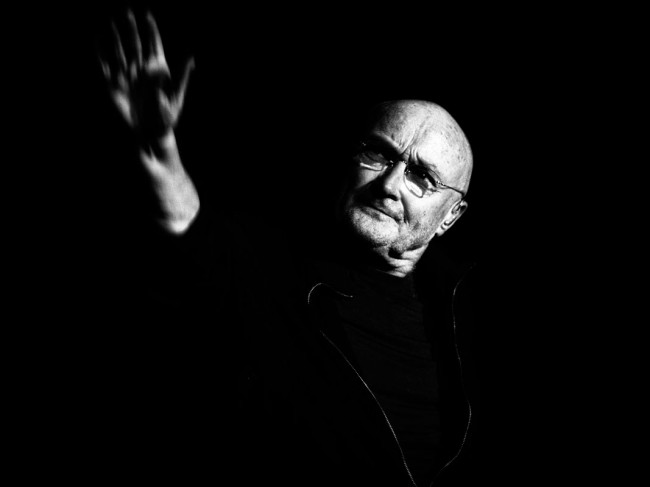 If you still need further convincing, think of it this way: we’ve written loads about Foo Fighters over the years and is there really any difference between Phil Collins and Dave Grohl. Obviously one has better hair and one is a better drummer, but, if you think about it, they’re more of less the same really aren’t they?

Those first couple of questions can be answered quickly. Phil Collins is Suncorp Stadium big in 2019 even though that seems surprising. I don’t come to Suncorp very often but there’s more people here tonight than there were the last time I came here to see a heritage act, back in 2008 when The Police played. Lots of people come to see Phil Collins in 2019. The expected 50+ crowd make up the vast majority of the crowd but it’s not just people old enough to remember the start of his solo career, there is a real range of fans.

So what has Phil Collins got to offer in 2019? What feels surprising is how contemporary so much of it feels, especially in the first half of the show. In a way it shouldn’t be a surprise at all; the slick R’n’B sound that Collins built his solo career on has been one of the dominant musical genres for at least the last decade. I’d hypothesise that if you took a sample of musicians with triple j daytime playlist support and asked them their views on Phil Collins, the responses would be positive. Even listening to the number one song in this year’s Hottest 100, ‘Confidence’ by Ocean Alley, there’s something about the vocals and the melody that’s very Phil Collins. If a young male singer-songwriter appeared in 2019 with these songs – songs like ‘I Missed Again’, ‘Inside Out’ and ‘Who Said I Would’ – they would be massive. Possibly not 100 million records massive, like Collins solo career, after all who is these days, but a huge star, with massive radio play, playing big shows to large audiences.

‘In The Air Tonight’ was always a great song, more so for the vocal treatments and the sound of the drum machine that made it sound like nothing else than the drum fill that has become the song’s favourite moment in recent years.

However, it all goes downhill from this point. While the first two-thirds feels contemporary shorn of it’s 1980s studio production, the rest of the night all becomes very cheesy and very 1980s, but not in a good way. It’s giving the people what they want but it’s a shame.

Even with horn section available and waiting in the wings, there’s no attempt to reinvent his cover of The Supremes’ ‘You Can’t Hurry Love’ so it’s delivered with terrible sounding keyboard sounds that everyone has been ashamed to use for the last 30 years. ‘Dance Into The Light’ is all the bad things you remember about Phil Collin’s solo career.It’s just not a very good song.

A cover of Genesis’s ‘Invisible Touch’ is rearranged for horns to turn it into a Phil Collins solo song and ends with a very drawn-out sing-a-long call and response with the audience. It might have been a big hit for the band back in 1986 but it’s not the greatest Genesis song by a long way. It’s the third Genesis song of the night, following on from ‘Throwing It All Away’ and ‘Follow You, Follow Me’ played back to back earlier the set. There was never going to be anything from Selling England By The Pound or The Lamb Lies Down On Broadway but the song selection keeps Genesis well and truly locked in the three-piece version of the band.

‘Easy Lover’ is one of those songs that I can still remember hearing for the first time; playing on Radio 1 on the car’s stereo on our first family trip up to London. It was also the first time hearing Madonna’s ‘Like A Virgin’. If I did guity pleasures, this song would be one of them. Backing singers Arnold McCuller and Amy Keys take over Phil Bailey’s vocals and the band all come to Collins, flirting with him while he acts all uncomfortable, but it’s all very a bit tacky.

‘Sussudio’ comes with streamers and confetti but it doesn’t save it from being a terrible song from the 1980s that everyone should have tried to forget. Whereas so much of the songs early in the set sound contemporary, this one just can’t escape the decade it was made in and so feels dated. Everyone is up on their feet dancing to it though. They could have had any song from 1985 and yet they chose this one to be special to them. There’s Top Of The Pops 1980s-style graphics on the big screen, all hot pink and turquoise swirls and it’s confirmed once again that you can’t have a horn section without terrible synchronised dance moves.

I don’t think I can agree with The Guardian’s review of this Brisbane show that calls it ‘life-affirming’. At its heart, nostalgia is about mortality. Although there’s a few hours of escapism, and it’s often fun, we all know that it’s a fleeting and futile exercise. Underneath it all, there’s a profound sadness in us all trying to recapture those moments because are we really thinking we were happier and more carefree in those days.

Although it’s not the intention of the tour or the show, and those onstage are enjoying what they’re doing and projecting all of that onto the audience, it’s hard to escape the concept of mortality watching Collins, even for all of his good humour. He walks very slowly with a cane across the stage, he falls into his chair more than he sits down in it, he has issues with one of his arms and has had problems with his hearing. He only stands for one song -‘In The Air Tonight’ – and you can clearly see the effort it takes him to do this. I’m sure he’s not after anyone’s pity, but it’s sad to see. It’s really sad that he can’t drum anymore, as I still spend a lot of time listening to his drumming.

You can’t help but wonder whether his polarising solo career has been detrimental to his reputation as one of rock music’s best drummers. He’s rarely talked about in the same way as so many of rock music’s other highly rated drummers. Sometimes I think people have forgotten that he ever was a drummer.

Although he doesn’t get behind a drum kit during the show, he does take to his slaptop cajon as part of a percussive trio with his 17 year old son Nic, whose impressive drumming throughout the show is a real triumph, and percussionist Richie Garcia. Despite his limitations, you can tell how much he is loving this moment just by the look on his face. He’s completely in his element. At the end, when Garcia reaches over to shake his hand, he’s beaming from ear to ear.

The Australian shows have had rave reviews for the most part. It’s 2019 and the rehabilitation and redemption of Phil Collins, solo artist, is complete. Its not something you would have expected to see 25 years ago.