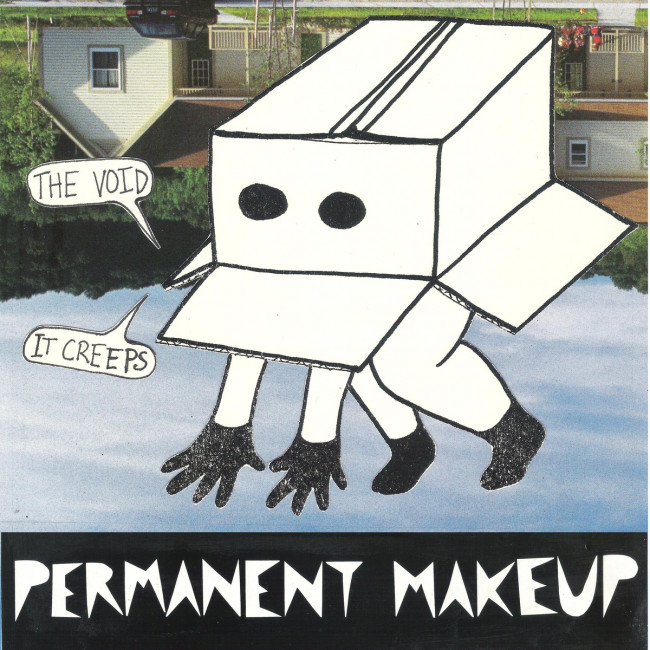 These guys/girl are from Tampa, and oh I fucking know all about Tampa, Florida (St. Pete if we’re being specific, and yes the difference matters). I’ve still got my Orange Blossom Catering black polo shirt, though I only break it out for special occasions.

Maybe I should go get it. The debut album by Permanent Makeup is pretty goddamn special. Apparently, their first show took place in a dentist office. The band improvised while audience members came up and read infomercial transcriptions.

Already we are off to a good start.

It starts out in the world of Sonic Youth — a tinny, anemic charming version of SY — before shooting off in the direction of Sun City Girls, Minutemen rants with Pere Ubu paranoia, especially in the overnight AM radio conspiracies of ‘Chemtrails’.

It’s not the most original thing in the world, but it’s a hell of a lot of fun. Even the cribbed SY-isms — melodies/riffs from ‘My Friend Goo’ and ‘The Sprawl’, the Thurston/Lee inflections — make me smile. I don’t know why. Sometimes these things transcend thought and high ideals.

Maybe it’s because the novel I’m working on this year is set in the fictional Key Abismo, FL during the (possibly fictional) apocalypse. It’s called Right In Front. There’s a killer playlist assembling itself lately on my Rdio account, and Permanent Makeup just joined it.

Now if I could just find someone with a recording of that first PM show, the one with the infomercials… the goddamn book would write itself.

All I know is the music of Permanent Makeup makes me hop around and grin in a way that the latest album by, say, The Men does not. There’s a looseness here, a freedom, a nonchalance that feels refreshing. Maybe it’s just that simple: it sounds like the band is having fun.

And most music I hear these days, particularly from the US underground, and particularly from the NYC end of the US underground, sounds like the people involved aren’t having any fun at all. All I can hear are people chasing success, and finding that no matter how much they get it’s never enough. I hear music made by people who haven’t yet realized there are better ways to spend your time than worrying what everyone else is going to think about you.

I feel a manifesto coming on, and there’s a place for one, but I’m not going to derail this PM review. Let’s just say it’s possible to be a broke-joke no-hoper living in Florida and still get by on a 25-hour work week. And as long as there’s been interesting music, it’s likeliest, to come out of the place where the rents are cheap and the time is abundant. Once upon a time, Williamsburg fit this definition, but it sure as shit doesn’t now. Think about it.

Permanent Makeup – The Void… It Creeps