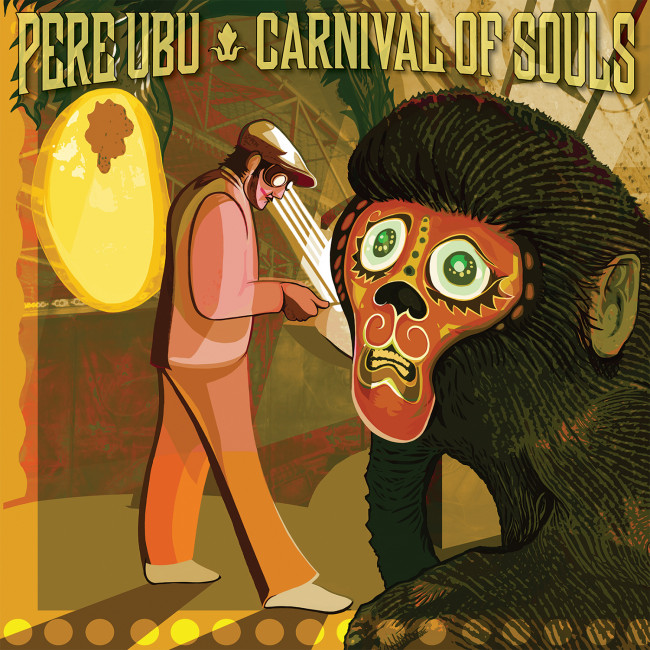 For an entity as dependently freewheeling as Pere Ubu, I shouldn’t have to say much.

Of course this new LP is great. Better, I’d venture to say, than last year’s Re-mit, another latter-day release from a renowned cult institution. I mean, there’s a clarinetist on board now. You remember what I said about clarinet solos? SOMEONE GETS ME. Licorice sticks noodle marvelously, and yet everyone passes them over for sexy saxes. WELL, NOT TODAY.

Anyway, really – this incarnation of Pere Ubu may not float so buoyantly, or break as many standards of decent conduct, as the first formation could. But, where the new Fall merely plugged in holes for Mark E. Smith to carouse over, this band retains a curious character, morphing at their own will rather than molding to David Thomas’s whimsy (although, rest assured, they do coordinate, and brilliantly so).

There’s even a series of instrumental interludes from it that I haven’t heard, because the vinyl and CD tracklists differ (you’ll have to report back to me on that one) – see, before ya even dig in, you can tell this’ll be another tour de force of trickery.

From a production standpoint, Carnival of Souls sounds as clear as a bell. But try and pinpoint a genre, one term to categorize the whole LP, and things aren’t so clear. “Visions of the Moon” coasts in a Tuxedomoon-like, nocturnal neon lounge vibe (maybe that’s a coincidence?); “Dr. Faustus” slithers in on a single unnerving guitar as undisclosed bits of metal (coins? Chains?) rattle in the distance; “Irene” irons out the kinks completely, and could’ve been lifted directly from the third Velvet Underground album. Granted, on that last one, there’s a stray hissing sound, but given this gentle context, I imagine someone’s frying bacon in the kitchen, preparing a hearty breakfast for his sweetheart. Isn’t that what real lovers do, anyway?

“Bus Station” though. That jerky, straight-man funk, slicked back and de-cored? A smash single in Pere Ubu’s carnival universe.

You will, no doubt, wonder how our good friend David sounds now – the man’s voice, after all, has previously leapt through flames, dragged through drunken stupors, barked out laughter in our faces. I reply that he baffles again – when “Golden Surf II” revs up and crashes into yr ears at full tilt, with the brute force of a derailed crazy train, and a voice rails like a fiery general charging the cavalry to their deaths, I asked out loud if this was in fact the same David.

Oh, yes. Of course it is. If anything, age has emboldened our protagonist, not crippled him; he has stabilized, and can slip from whispering tempter (“Visions of the Moon”) to howling mourner (“Drag the River”) without any stitch in between. Is that confidence any less compelling? Of course it’s not.

I love how he’s stolen bits of lyrics – bits of other souls, to pursue the theme – and taught them new tricks. He’s done it before – what was “Caligari’s Mirror”, after all, but an old sea shanty drenched in extra whisky and warped into a wonky new wave banger. When Creedence Clearwater Revival declared “I put a spell on you / because you’re mine”, they were seizing control of an unruly woman (them damn unruly women); when David croons it on “Irene”, he does so without the bitterness, without the command. And what IS happening in “Bus Station”, exactly?

Mind, in comparison to The Modern Dance, most regions of Carnival of Souls are well-paved and marked with handy sign posts. (Do you know which way “Sentimental Journey” leads? Me neither.) But mismatched quotes and grim middle-of-nowhere roads aplenty still line the way, like the CD’s closer, the 12+ minute drone shamble “Brother Ray” (unrelated to its more infamous sister).

At any rate, I need to shut up now. Because, at the end of the day, Pere Ubu are still Pere Ubu, and that’s really all you need to know. And besides – there are TWO songs on here that remind me of Tuxedomoon, and I highly doubt that anyone else in 2014 will top that. Out next week, y’all.