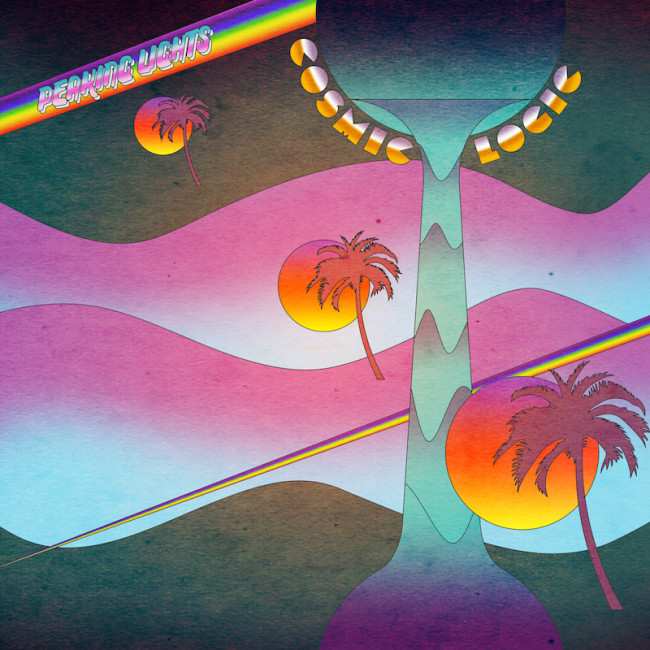 It’s funny. Mike plays New Order’s Technique all the time in the shop, and some folks have told him how dated it sounds.

To them we say, ha. Have you heard what the kids are into lately?

Clear a space. Peaking Lights and I are gonna rumble. From the outset, I knew I could pin these kids down. And that’s all Cosmic Logic is about, really – a showdown between the savvy kids and the savvier critic to name the most synth pop references. From “Telephone Call” on, the glittery gauntlet has been thrown.

No doubt, though, Vince Clark’s staccato pop riffs infiltrate the core – “Hypnotic Hustle” thrives on synthetic sound, like keyed-in vox lines and digital horns, all in straightforward jerks. ”Little Light” scoots by with sparkles and faux-sting blossoms, but the integral ostinato anchors the tune firmly in Clark’s domain.

Already, though, this kind of imitation is problematic. Where would Clark have been, after all, without powerhouse frontfolk like Alison Moyet?

Peaking Lights lack such vocal firepower – this chick reminds me a lot of Scraps, with her playful spacey drone. The lyrics too, rarely deviate (with one noted exception) from vague, kitschy notions of love and space and the neverending dance party. Which suits a bedroom project, but can a dance-y synthpop outfit get by on singsong?

Well, maybe. No, not on the aforementioned “Little Light”, which grates the nerves with its sugar and sprinkles – but I find myself nodding and swinging to “Eyes To Sea”, which churns on a very Daft Punk-ish squeaky blippy beat, and yet glides along on some twee Parisian vibes that tease AND appease. The The The-ish, stately pondering synths on “Dreamquest” work quite well with the coy singer, too, especially with the dashes of whistle and other whimsy.

OK, but get in the ring, you slippery lot. Let’s dance. By “Bad With The Good” we’re circling each other, jostling from tippy-toe to tippy-toe.

Take the bad with the good
Take my heart, if you could

Latter-day New Order, eh? No doubt. Right down to the pseudo-hand drum break. But that’s OK. We can do this all night if we have to.*

By “New Grrrls”, we’re demolition dancing. We’ve locked eyes and we’re shaking hips like our lives depend on it.

Feminism gave me a choice
Riot Grrrl gave me a voice

Hold up, wait a minute. What happened to Moyet? What about Annie Lennox? Forget Kathleen Hannah – where would anyone (and especially you, Peaking Lights, who consist of two members) be without the synth pop duo, the fire-and-ice staple of early 80s radio play? Yeah, it’s that stupid man has brains/woman has passion dichotomy, but Moyet and Lennox moved up front, dammit, a whole decade before Bikini Kill. Up front and to the top of the charts, too.

I’m not saying you can’t write a disco tribute to Riot Grrl. I’m saying, you shouldn’t snuff your real muses for the sake of sounding cool and hip. So maybe Yoko Ono and Kim Gordan DID inspire you. Great. But do you really believe that the Wiccans had anything to do with your wobbling about? No, I don’t think you do. I am elbowing you off this dance floor, P. Lights. Your tribute sounds wishy-washy to me.

Yeah, that’s it. We’re done. Roll up the disco ball. I see what cha did there on “Tell Me A Song” – with the shanty-like carnival tilt of the pianos, totally unlike the rest of the album – and ya stretch it out long enough that it’s almost legit. But that’s one too many make-believe violins for one day, I believe, and anyway I don’t know what song to tell you.

Part of me believes I’m being unreasonably nitpicky. But another part of me insists that I’m not, that Peaking Lights have robbed the sounds I adore of their voice. Throughout Cosmic Logic, I sense that the band plan to achieve nothing more than stirring a few hipsters off their rumps. When I listen to Eurythmics or Yaz or The The or New Order or the Human League** (to name a few!), on the other hand, I sense forces lifting floodgates in the brain. I see people striving to be heard, striving to push harder. There is no struggle, no loss, no grappling with Peaking Lights. The sounds they summon are mere echo.

* – I’m dead serious. When the English Beat swept Athens, I skanked that entire two-hour set. When Egyptian Lover unloaded their 8-0-motherfuckin-8 here a few months later, I never stopped. Not once. 120 minutes of raw sweat and swearing, from midnight to 2-ish. And that was AFTER a staggered hour of disco diva fury from the resident DJ. When the music finally ceased, I nearly collapsed on the last two tables in the room. (Witnesses can testify to this.)

I’ve found that, to impress yr friends and maybe even the band, style and technique is unimportant (which is great cos I lack both). All that matters when the beat is down and the lights are off and the feet get funky is to keep at it and own that one square foot of space I’ve got. Because, at the end of the night, I don’t think I’m ever happier, more congenial, and less prone to hating myself than after I’ve knocked myself out.

** – Idiot me. For years I stuck to the League’s first two albums, with their dire intellectual musings. But Peaking Lights sent me reeling back to the 80s, and I threw on Dare! for the first time in 3 years. Fuck me! The League lost nothing when they lost Ware and Marsh to Heaven 17, did they? Oakey was always my favorite, anyway, with his gorgeous asymmetric bangs. (And didja know that he still’s quite dashing, even though he’s teetotally bald? SIGH.)