One of the angriest reviews I ever wrote | U2, live in Philadelphia, 1992 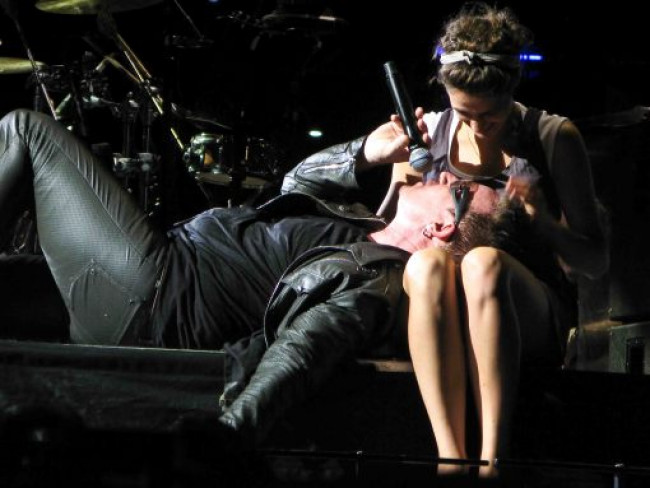 This is the heart of the American dream, a ravished pop-cultural wasteland full of big, glossy, ultimately meaningless images of confusion and blaring noise which oscillate round your head with alarming randomness. This is chaos passed off as art, art passed off as purpose. This is stasis passed off as revolutionary, self-depreciating anarchy. And this is the purgatory that America deserves.

Maybe it’s deliberate. Maybe Bono is trying to destroy what he, more than any other media icon, represents – after all, Rattle And Hum helped redefine American culture-as-pomp when it appeared a few years back. If so, he’s doing a bloody great job. American society is sick, dying where it slobbers and spurts. We’ve seen the future, and it’s fucking scary: industrial junklands populated by faceless numbers and scavengers, their only reality the giant screen – a U2 concert in a microcosm. U2 are a bloated, self-satisfied reflection of the society that spawned them and that they helped spawn. Their ‘music’ has no shape, no form, no semblance of artistic merit. Its only definition is that of scale. In much the same way as America suppresses other cultures, in U2’s world, size is what counts, volume does for the dissenters. People don’t agree with you? Throw more images, more double-talk, more gloss, more sound at them. People still won’t give you credence? Hold on, bud – maybe we need a slight change of image. You can almost see the dollar signs light up above Bono’s head: “Hey! We’ve all this money and still no one respects us. What can we do? I know…let’s make like we care!” Just like the American president. It must be coming up to re-election time among the rock cognoscenti again. It beggars belief that after all these years, the need for artistic credibility is suddenly bugging Bono. After all, it never has before.

So, for all the neat cyber-cars which zoom up and down flashing subliminal nonsense messages and the pylons of gaudy neon and brilliance, there are 50,000 fans who figure this to be the highlight of their miserable lives. Sadly, they’re probably right. For every camera in the crotch, and ‘organic’ song (‘Angel Of Harlem’) strummed acoustically on a separate stage, there are a thousand fawning critics, desperate to believe that power equals art – because what is there to strive for, otherwise? For every flaming cross (‘Bullet The Blue Sky’), there are eight million willing martyrs. For every mirror kissed and traditional Irish drinking song sung and video camera given away from on stage, there’s a ‘Desire’, a $40 sweatshirt. For every ‘The Fly’ played mendaciously and confusingly in front of a backdrop of lip-service idealism, there’s an Eastern European culture waiting to be ravished by MTV’s glossy sneers. The fools. But remember, kids: any rock group, no matter how successful, no matter how popular, always has more people who hate than like them.

Everywhere I turn, people are at pains to point out what a caring, intelligent, humorous guy Bono is. Look at the stage-set, they scream. Oh, neat.  A belly-dancer, an inflated ego in a PVC suit, some totally cool lights, a bunch of visual soundbites flashed meaningfully across our collective consciousness on the omnipresent TV screens. But it’s the second biggest set ever, after Pink Floyd’s The Wall! Great. This makes U2 critically acceptable again? Jesus. The time for a cultural purge is way overdue.

But look at all the causes he supports, they scream, the fucking suburban liberals who would as soon sanction real change as they would allow a family of Croatian refugees to share their home, or cross the street to stop a racist beating. Look at the way he allows all these pressure groups to set up stall at his shows (Amnesty International, Greenpeace, Rock The Vote, local worthy causes like NYC’s Needle Exchange Plan). So why doesn’t he just give over all his fucking money to them if he’s so fucking Politically Correct? But he’s raising people’s awareness! Yeah, right. It’s the illusion of change he’s supplying, not the actuality. But – all his apologists and arse-lickers scream – U2 refuse to accept corporate sponsorship! Like they don’t have enough money already!

Look, Bono’s subversive – he phones up the White House every night! What’s the fucking difference? But Bono knows how to laugh at himself now! What, it takes all this condescending grandeur to do that? Hell, me and my friends manage to laugh at ourselves every day, and no one hails us as visionary prophets. Shit, there isn’t the slightest jot of evidence to suggest that he’s even doing that, tonight. Maybe he’s only self-deprecating in the cities that count, like NYC and London, where he knows the critics will be watching.

Bono has moved on from wanting to be The King. He moved on years back from wanting to be The Pope. Now he wants to be someone decadent, someone safely repugnant and archetypal. Someone who’s a gold-digger, American and apparently radical. Now Bono wants to be Courtney Love. He wants ultimate control. You may take this to be a sign of good humour. I take it as a sign of dementia.

Something else I notice amid all this furore. No one ever mentions the music. Who can blame them? Tonight, the sound is dreadful: boomy, echoing and muddled. The songs from the new album are incomprehensible, the crowd sings the chorus of ‘Sunday Bloody Sunday’ over the verse and vice versa, the guitars are out of tune on ‘New Year’s Day’. ‘I Still Haven’t Found What I’m Looking For’ – a song that U2, if they’d had any grace, should’ve dedicated to Negativland and SST, seeing as how their lawyers have almost sent both parties bankrupt after Negativland dared tamper with the sacred creed – is risibly anthemic. ‘With Or Without You’ lasts an eternity…but none of this matters. If we’d wanted to hear the music, we would have stayed at home and listened to the records. We’re here to celebrate our communal blank media-fed togetherness. And that’s it. I look around me, and all I see is the illusion of rebellion, a meat market of white, middle-class MTV-heads who pretend they’re right-on, all the while counting the hours until they get to stand in daddy’s shoes and rape the rainforest too. I have no empathy for this banal ritual. The empty roaring gestures are just that – the use of power and money and light to bludgeon people into bleak acceptance on every multi-media level. Illusion is a dangerous device. It can divert people’s energies from actual change, so that they can wallow in their ‘rebelliousness’, secure in their mediocre camaraderie.

Bono’s ego knows no bounds. Not prepared with being in the biggest fucking rock band on the planet (and, yes kids, think how many compromises, how bland your music must be to achieve that status), now he wants critical acceptance too, as some kind of deconstructivist star. Don’t listen to the critics who say he’s fine. U2 have as much to do with art as George Bush. There’s no possible fucking way they can be subversive. They call the shots on every count. I stand in the middle of a baseball stadium somewhere in America and feel totally lost, totally depressed, totally overwhelmed – precisely the feelings U2 want to evoke. Bono knows how powerless we all are, how subservient we all are to the great god VIDEO. He realises all this, and still feels a desire to laugh in everyone’s faces, to rub it all in.

1) I was in town with U2’s support band, Michael Franti’s polemic, lively rap act, Disposable Heroes Of Hiphoprisy (who managed a very creditable show of filling up the empty stage before Bono’s triumphant appearance). Shortly before U2 took the stage, Bono’s personal manager came over to our dressing room with a gift for me. It was a hatchet, inscribed from Bono. “It’s your duty. Do it,” he wrote, next to a little scribbled self-portrait. I appreciated his humour – surely a Melody Maker journalist could only be in town for one reason only, to do a hatchet job on his band – and determined to live up to his command.

2) The line about “what’s the fucking difference” in reference to Bono and the White House seemed self-evident to me: here were two sets of people, both on top of the world, both able to manipulate those around them with ease. The only difference was that one set was claiming to be subversive.

3) Zoo TV was bloody spectacular: a triumph of intent over content. The only thing that separates artists from madmen is the switch, the sorting switch that they can flick on and off at will, and use to sort through the detritus of everyday life, all the countless, numbing, confusing images. Zoo TV didn’t bother to flick that switch, instead it let all the images tumble out at us in their meaningless profusion. That is why I hated it. Not because of its scale.

4) In the original review, where I wrote, “Not prepared with being in the biggest fucking rock band on the planet (and, yes kids, think how many compromises, how bland your music must be to achieve that status), my U2-loving Reviews Editor typed “that’ll be why Nirvana never cracked it then” – a fair comment, except I had already dwelt with the contradictions in Nirvana’s position a few months before in a Melody Maker live review.

Photography: Picture Of The Wind

One Response to One of the angriest reviews I ever wrote | U2, live in Philadelphia, 1992