of Montreal – lousy with sylvanbriar (Polyvinyl) 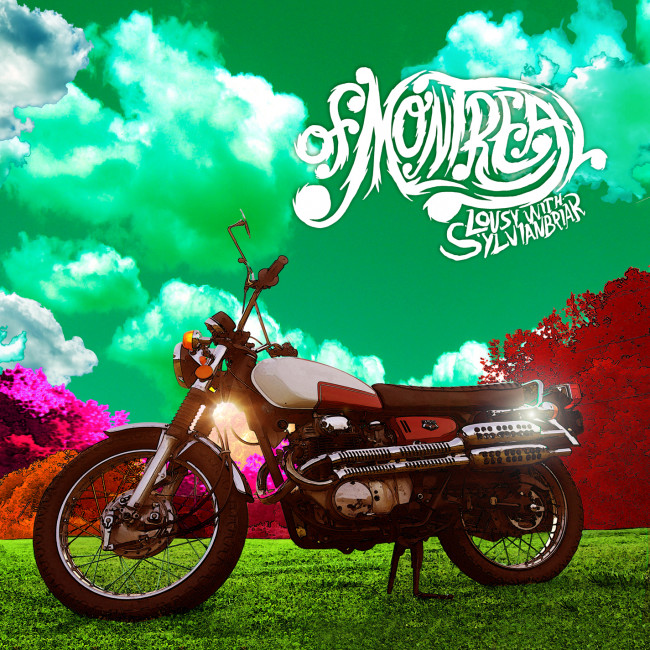 I’ve spent the past afternoon going back through the of Montreal back catalogue. Goddamn there is going to be a great double-cd comp one day. Or you could do two double albums, like The Beatles Red & Blue albums (I nominate a 1996-2004, 2005-2013 split for oM).

An album so good I’m willing to indulge his scattershot use of capital letters, lousy with sylvanbriar finds Kevin Barnes foregrounding his shadows. It places his songwriting skills front and center.

Your mother hung herself in the National Theatre when she was four months pregnant with your sister who would have been thirteen years old today. Does that make you feel any less alone in the world?

You can find all kinds of award-winning short stories that don’t have an opening as good as that one. For Barnes it’s a throwaway, one more cutting line in a career of them. He’s got a vocabulary that would make David Foster Wallace blush. How come nobody talks about his lyrics except as a joke?

The album gets stronger as it goes along, middle-loaded with some of the best songs of his career. The run from ‘Belle Glade Missionaries’, a song that recycles the riff from The Grateful Dead’s ‘Truckin’ to glorious effect (I’m being serious), through ‘Amphibian Days’ is 20 minutes of conventional prettiness to die for, or die to.

It’s Dylan at his dandiest, the least earthy version of Dylans, the one least covered in dirt, self-applied or otherwise. ‘Hemigra Emigre’ could sit seamlessly alongside anything on Highway 61.

The guitar in the chorus of ‘She Ain’t Speakin Now’ reminds me of Suede, of all people, the first album specifically. So does album closer ‘Imbecile Rages’. The fact that reviews are comparing this album to The Rolling Stones says all kinds of interesting things about the people who make that comparison.

I wrote these guys off a few years ago, but the last two oM albums have proven me gloriously mistaken. Kevin Barnes has now created a body of work that can stand alongside his influences without embarrassment. What’s your favorite of Montreal era? lousy with sylvanbriar suggests there may be more to come.

I went ahead and (hastily, as quick as possible, without an overabundance of effort) assembled a prototypical red album/blue album split over of Montreal’s career. It’s open to the public so feel free to edit them if you feel so inclined. The 2nd one has my favorites from this album.