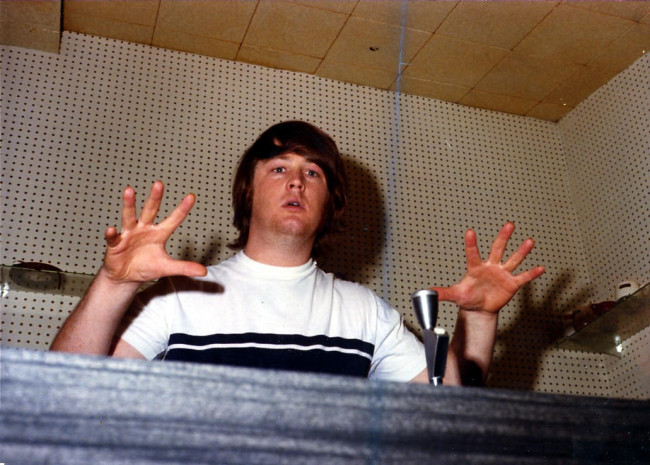 I sought advice on this.

The following comment was left on Wallace’s spoof Brian Wilson post late last night (Brisbane time). I have no way of ascertaining whether it’s for real. Obviously, I could email the fellow on the address given below, but if someone’s gone to the bother of making the comment up, then creating a new Gmail account isn’t going to worry them. I’m inclined to believe it is, simply because it seems like an incredibly elaborate AND obscure hoax to pull … why would you bother? (Of course someone could be running a hoax comment with Lorren Daro’s real email address. If that proves to be the case, I will immediately take this down.)

One contributor advised me not to bother running it: they felt that, if it’s real, it’s simple self-promotion, posted to settle old scores. Another stated: “I’m kind of a ‘let the chips fall where they may’ kind of guy”. Although I agree with the former I also side with the latter.

I have, of course, have no way of verifying any of the content is for real or not, even assuming it was written by Lorren. That’s for you to decide.

I’m the fellow who gave LSD to Brian Wilson in the early Sixties. I have been vilified for doing this for almost fifty years. I would like to set the record straight about this event:

I had been a close friend of Brian’s for three years when he came to me and literally begged me to give him LSD. At first, sensibly, I refused. Two years earlier, Brian had asked me to give him marijuana. I refused to do that, as well. During this period, Brian was at my home, or I at his, several times a week, and I attended many of his recording sessions.

Several nights a week when I was off the road, I held in my home what could be termed a ‘salon’ – much like Gertrude Stein did in the Paris of the Twenties. Many young artists, musicians and celebrities of the period attended. Almost everyone smoked marijuana except Brian. I would not allow him to. A full year later, I finally relented and gave Brian a joint. He loved the effects and felt his creativity had been greatly enhanced by the drug. There were no ill effects on him that anyone could detect. He was grateful for my finally agreeing to do this for him, and he continued to write one hit after another. He was stable, sane, and in high spirits.

Soon, Brian’s young cousins from Chicago came to L.A. to live with him. Along with them came a friend of theirs named Terry Satchen. Terry ingratiated himself with Brian by supplying him with marijuana, hashish and tempting him with other substances. I witnessed this personally and warned Brian to stay away from him.

Not long after, Brian told me that if I didn’t give him LSD, Terry would do it. I knew how badly that would turn out, and so, once again, I relented. I had taken many trips and I knew the rules: Be an attentive and compassionate guide. Don’t take the drug at the same time. Keep silent and protect the tripper from the environment and himself. I carefully warned Brian of the risks involved. He had a joyous, deep and moving experience, and thanked me endlessly for this gift.

This was the one and only time I gave LSD to Brian. For the record, it was 125mcg of genuine Owsley, a clean, pure and correct dose from the best source known. This happened in 1964. LSD was not declared illegal until 1966.

Within months, Brian retired from the road with the Beach Boys to stay at home to write and produce their records. It was something he had wanted to do for years. Brian’s jealous and patently insane father, the Boys, and especially the ironically-named Mike Love, were appalled by Brain’s decision. He was always bullied and intimidated by these people, and found that the only way he could get away from them was to feign mental illness – hiding in his bedroom with a pillow over his head, acting erratic and unstable, etc. He admitted to me many times that this was a theatrical performance and a purposeful sham to get off the road.

He performed this act for so long, and with everyone in his life (with the exception of myself and a few trusted friends), that eventually he became pathological. Brian’s descent was exacerbated by his excess intake of food, tobacco, cocaine, speed, downers, more LSD, as well as many other drugs given to him by, among others, Terry Satchen, as Brian related to me.

That ridiculous quack, Dr. Eugene Landy, made all of this much worse with the prescription drugs and the line of bull he fed Brian on a daily basis. None of this was helped in the least by Brian’s (in my opinion), moronic, bovine wife, Marilyn, a woman he had married only because he had been rejected by her sister, Diane, the one he really loved.

All those fools around him blamed that first trip on LSD for Brian’s retreat from the road and from the world, ignoring what he had subsequently imbibed. But he only wanted to stay home with his wife, his dogs, his piano, his jukebox, his recording studio, and his swimming pool. He hated, really hated, the road. On his last tour flight, he had a well-documented nervous breakdown. Brian told me this was a ploy to get off the road.

I became the villain in this drama. I was the ‘Hollywood hipster’ who had ruined Brian’s life. Nothing could have been further from the truth. Brian’s real friends, like David Anderle (whom I had known since grammar school), Tony Asher, at the time, my best friend, and Van Dyke Parks (I introduced Tony and Van Dyke to Brian), all agreed that I had done no harm to Brian, and, considering the threat posed by Terry Satchen and others, had protected him admirably.

All I can say in my defense is that it is universally understood that Brian’s best work followed in the next two years: ‘Pet Sounds’, ‘Good Vibrations’ (written about my wife, Lynda), and ‘Smile’, among others. (Incidentally, ‘I Just Wasn’t Made for These Times’ was written about me.) Mike Love hated all this new, modern work, and viciously attacked Brian about it again and again; for years, Mike employed teams of lawyers to harass him. He called ‘Good Vibrations’ “avant-garde shit”. Ask yourself, how you would have liked to have spent years on the road with (again, in my opinion), the detestable Mike Love?

Please keep in mind that Brian, to this day, is humble, self-effacing and eager to please others. He has always abhorred confrontation of any kind. He was unable to stand up to powerful villains like his father and Mike Love – not to mention Marilyn and a greedy herd of record business executives. Running away and pretending to be mentally ill was his only solution. He was fenced-in by selfish, narrow-minded mediocrities.

Because of this, Brian could not mention my name in public, or to any of them, except in ‘regretting’ his LSD experience. Brian’s mother, Audrey, became the inspiration for ‘Good Vibrations’. Just reading the lyrics will explode that myth. Also, that ‘I Just Wasn’t Made for These Times’ was about himself. ‘Not made for these times’? ‘What goes wrong’? It makes no sense.

I loved, and still love, Brian. I tried to be the best friend I could be for him. I never took anything from him, although he offered many things, many times – including the presidency of his label, Brother Records, which I sensibly declined. He subsequently offered it to David Anderle, who accepted.

Yes, Brian has publicly denied my beneficial influence on his life, but he has never done that with me, or with his real friends. Because the people around him hated me, and because Brian is incapable of giving offense to those he depends upon, he cannot speak positively about the life-affirming experiences we shared and survive the blowback. To quote Tony Asher, with whom Brian wrote ‘Pet Sounds’, “Brian is a musical genius, and an amateur human being.”

I am in my seventy-fifth year. I have carried the burden of my blackened reputation long enough. I have never felt guilty over my decision to give Brian what he wanted – and felt he needed. I was inside this situation and understood it deeply. Considering the alternatives with which I was presented, I did what I knew was right for Brian. Please keep in mind that it takes two minds to agree to any mutual action. Brian is as responsible for his own decisions as I am for mine. And, please keep in mind, you weren’t there!

Please feel free to comment and/or post this missive to other Websites as you choose. I will be pleased to reply to anyone who wishes to engage with me in sane, intelligent dialogue on this subject. But, if you just want to vilify me further, please save your energy.

I grew up in Beverly Hills and graduated from UCLA. I was, in turn, a talent agent for the three largest agencies in Hollywood: MCA, GAC and Ashley-Famous. I founded the rock and roll departments for the latter two. Sick and tired of being required to lie to bosses, vendors and clients, I left to become, in turn, a publicist (Johnny Mathis), a record promotion man (Liberty Records), a concert promoter (Ray Charles), and, for many years, the national Tour Manager for a number of famous musical groups. Many of these were English bands that hired me for their American tours. These included, among others, The Beach Boys, The Who, The Association, Deep Purple, The Troggs and Three Dog Night. I was, at that time, the highest paid Tour Manager in show business.

I left the road in the early Seventies to live in Big Sur and Carmel Valley. I started a family, and ran my own agency serving colleges and universities with concert acts. I went into real estate investments and published two books: a specialized English dictionary and a textbook on health supplements, both of which I authored. I moved to a small town in Northern California in 1999 and still reside there.