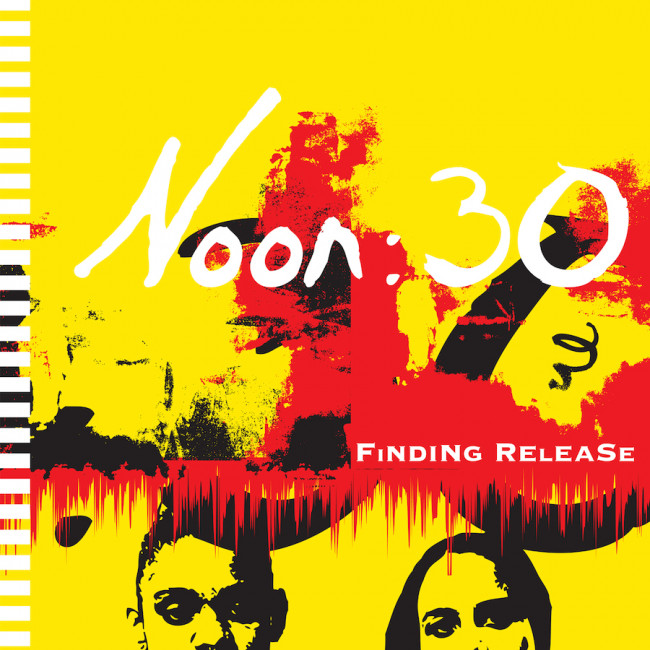 I’ve been trying to write an intro paragraph here – something to prepare you for the radical Noon:30 and their unflinching sense of self – but my tongue keeps tripping. How do I recall that first shudder from a year ago, and the dozens of shudders they’ve given me since? No other way, really, than to just let ya plunge in, eyes closed, hurtling down to the deep end.

Kinda Tricky-ish? Sure. But you can also hear a serrated industrial edge slicing down your spine, shuddering thuddering oil drums (or maybe that’s a radioactive substance – oops). And there’s Blue, of course, the dynamite in the operation, a crippling force that frightens me way more than any gutteral metal growl or leather-clad EDM shriek.

There’s only four original tracks here, but in the best possible order – “Dream”, a skate over thin ice, a ballad on the rails, the last safe space; “Interlude”, the cracks, the final warning before the surface shatters; “Rodeo”, the cleansing, the seething acid rage, the bloodbath; and at the deepest depths, “Gun”, the greatest horror.

It’d be easy to interpret “Gun” as an open invitation for all women to take up arms against the men who would otherwise pummel them, to throw a wrench in the usual male dominance scheme. But there’s too much lurking in the shadows, too much nocturnal snarl, too much Nine Inch Nails to read it that way. Aimee’s remix, which amplifies the tumbling drums into a collapsing cascade, reinforces the ugly terror at the heart of the scene – no matter who’s in charge of who, someone’s going to die, and someone else is going to lose their shit. In “Gun”, Noon:30 reverse the usual state of affairs, but that doesn’t make the female gunman any more attractive. When Blue screams you don’t really wanna fuck with me, she’s not on top; she’s on the brink.

Indeed, that’s the bigger picture here – nothing good comes of hate. This EP, as its title implies, seeks a break in the cycle, a turret on the battlefield from where those negative, stifling forces can be named – absent friends, backstabbers, shit-talkers, disrespectful dudes – and sniped. In “Rodeo”, Blue explains the struggle:

I need to pause, inhale, exhale and release
Looking for something to save me, trying to find inner peace
All this anger burning in me, and it’s getting real strong
Seems like the darkness is growing, starting to take all control

Look. Lemme be straight with ya. I’ve been pecking away at this piece, because Noon:30 bleed so hot that I can’t handle it in one take. Don’t get me wrong, Finding Release is deftly cut, a mission set to action like a heat-guided missile – but then there’s the raw steaming guts, splattered out, still throbbing, diced before my eyes every time I plunge in. It’s Prurient levels of intense – but where that guy devastates on an abstract tundra plane, Noon:30 smack ya on a .

What I’m trying to say is, you need to hear this. Now. Especially you.