One of the biggest things I struggle with regarding hip-hop is lyrical content. A pervasive preoccupation with self-aggrandisement does little for me given the typical scope of a rapper’s goals (money, fame and ‘bitchez’). I think a prime example of doin’ it right is Lupe Fiasco, whose lyrical scope adds depth and meaning to his music that transcends simple bombast.

While I don’t believe in assessing music by gender, it’s hard to look at someone like Nicki Minaj without considering a feminist agenda, especially given the aforementioned obsession with the self. Successful female rappers are a rare enough breed, and while other female R’n’B artists may focus on their sexuality or sexual appeal and/or romantic interests, Minaj has a distinctly ‘masculine’ attitude towards her lyrics. She covers topics like her troubled upbringing, heaping shit on would-be rivals, and aggressively pursuing reputation, fame and fortune, and of course sexual conquest, just like her male counterparts. When she talks about sex, it’s usually dirty, bordering on offensive and probably terrifying to men used to their ladies singing vapidly about true love.

It fucking rocks. She does it with mischievous glee: “It’s me!” She shouts, giggling derisively. “I win! You lose!” Whether she intended to or not, she represents a distinct kind of transgression and female struggle, the balance between female sexuality (she is pretty damn sexy) and the right to be aggressive, to be strong and arrogant and be considered in the same league as the big boys, rather than merely cute comparisons to Missy Elliott and (shudder) Fergie.

The title of the mixtape, Barbie’s Back, refers to her habit of creating alter-egos (she discusses them frequently in her lyrics, calling herself among other things Nicki Lewinski and The Harajuku Barbie). She has many, and according to her, they act as a coping mechanism and a way to explore different styles and personalities without compromising her ‘inner self’. The only shame about this mixtape is that it’s mostly remixes of inferior performers; my advice is to go get her album Pink Friday.

In the mean time, here she is doing her part for misogyny by featuring in Kanye West’s ‘Monster’. (Yes, I’m being sarcastic. Yes, I like this song. And its film clip.) 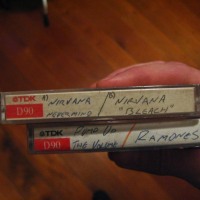