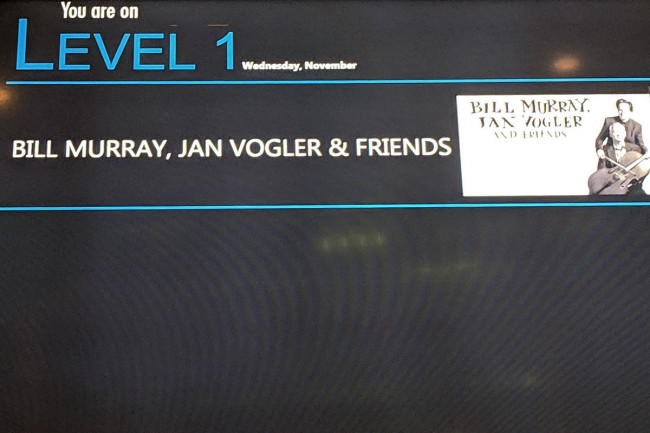 It’s curiosity that brings me here.  It’s as much curiosity about who comes to see “Bill Murray, Jan Vogler and Friends” as it is for curiosity about the show itself and how it will work.  Is it going to be a all Wes Anderson aficionados? Is it going to be older classical music fans who are here for Jan Vogler? Or is it going to be predominantly those patron of arts types that make the most of the opportunity for a night of culture, especially in the more secondary markets like Perth and Brisbane, where we don’t get spoilt for choice like the Sydneys and Melbournes of the world?  It’s not a cheap Wednesday night out in Perth, tickets being on par with your typical arena rock show, and, as you expect these days, the prices increase the closer you are to the stage.  In the end, it looks like a mix of all the three types I expected to see here, but difficult to say that any one group dominated.

“Hello. Can you hear me? My name is Jan Vogler,” is Murray’s opening, the curtain still raised as he asks everyone to put their arms around the person on their right and turn their phones off.

The first reading of the night is a short extract from an interview with Ernest Hemingway, a writer that he revisits a number of times during the night.  It’s followed by a reading from James Fenimore Cooper’s ‘The Deerslayer’, with a musical accompaniment in the form of a Schubert pieces from cellist Vogler, violinist Mira Wang and pianist Vanessa Perez.  Although this start is greeted by rapturous applause throughout the auditorium, Murray explains “This is the moment in the program when people look at each other and say….” before exaggerating a spectacular grimace. “We could go for a cheeseburger,” he continues.  “This stuff is rough but I want to promise you that the worst is over.”  For all the self-deprecation, what’s striking is how well it does work, the marriage between the words and the music is perfectly matched and each enhances the other.  It continues throughout the rest of the show and by the end you realise how much time and effort has been put into planning the show.

Bill Murray plays the part of Bill Murray throughout.  He has the slightly disheveled look that you expect, his suit looking like it’s been pulled straight from his suitcase and given a quick casual ironing in a rush to get ready for the show.  He plays the straight man from start to finish; the between reading asides to the audience are delivered as deadpan as you’d expect from many of the characters he’s played in the last 40 years.

Murray doesn’t leave the stage during the performance.  During the occasions when Vogler, Wang and Perez take centre stage, he removes himself from his podium at the left of the stage and moves of a chair that leaves him half hidden behind the grand piano.  It provides for slightly surreal, almost absurd moments when the view you have of one of cinema’s icons is only from the shoulders down, Murray sat still beside a small table that holds one tall glass of water (presumably) and one tumbler of whisky (presumably), his hands clasped together, occasionally tapping his fingers together but his face completely obscured by the raised piano lid.

As obvious as it is, given he’s an actor and has made his livelihood reading words out loud, Murray’s readings shine over the course of the evening.  You only have to study the rest of the ensemble watching him while read, completely enthralled, hanging on every word like the audience, even though they’ve seen him deliver these lines night after night for months.  The best parts are a meeting between Hemingway and the writer Passant, where Murray takes on all four voices within the reading, including two female parts, providing separate voices for each of them and James Thurber’s short story comedy ‘If Grant Had Been Drinking at Appomattox’, where again Murray’s characterization is excellent, and the accompanying Ravel sonata enhances the piece.

Towards the end of the performance, Vogler provide a ‘Moon River’ introduction to the start and end of a prolonged reading from ‘The Adventures of Huckleberry Finn’.  For this Murray moves his seat to the other side of the stage from where he’s spent most of the night, aware that the front half of the audience on one side of the theatre in the very expensive seats have had a limited view of him for much of the performance.  Without his lectern, he holds his black ringbinder with ‘Bill’ written on the tab insert as he delivers his monologue, his mimicry of the different characters within the passage is glorious.

The weaker points of the performance involve Murray’s singing, which is fairly rudimentary, nowhere near the elite level of the musicians he has accompanying him.  When his singing makes its first appearance in Gershwin’s ‘It Ain’t Necessarily So’ it is a shock given how rough it sounds in contrast to the music and the readings that have been delivered to this point in the show.  He engages the audience to join in during the choruses.  “Not bad’” he remarks. “Not good either,” he deadpans.  “It’s like being in church,” he concludes.

Other musical pieces where Murray sings during the remainder of performance are better though.  Some songs just seem to suit his voice better than others. The simple comedy of Tom Wait’s ‘The Piano Has Been Drinking’ is a more suitable for Murray’s voice but he also turns in vocal performances that ties the song together in the 19th century American classic ‘Jeanie With the Light Brown Hair’, and a surprisingly touching version of Van Morrison’s ‘When Will I Ever Learn To Live In God’.  A rendition of John Prine’s ‘Angel From Montgomery’ is another highlight.

Perhaps there’s something about the world weary gruffness of his voice that elevate these songs more so when the song is best known for and deserving of a much smoother soulful voice, such as ‘My Girl’.  Murray is no Smokey Robinson to say the very least.  The West Side Story medley includes an absurd ‘I Feel Pretty’ that plays up the inappropriateness of Murray singing the song’s lyrics for obvious comedic affect and ‘America’ that feels that its inclusion is for him to be able to reinforce the line “Porto Rico’s in America” line at the song’s climax.  The lesser known songs that Murray and the musicians perform work so much better than the more popular choices because they don’t come with the baggage of familiarity and are a better fit with the other pieces included in the show.

New Worlds isn’t your typical gig.  In retrospect it makes much more sense to think of it as a high brow variety show.  The whole thing might be viewed as a Murray vanity project, and maybe in the end that’s what it is, but he and the rest of his collaborators have obviously deliberated carefully and with great consideration when developing the show.  Not everything the ensemble attempts works but most of it does and ultimately it’s a hugely entertaining evening.  It’s not quite like anything else I can ever remember seeing before, which is reason enough for it to exist and reason enough to go and see it if you have the opportunity.  Murray might deadpan his performance to perfection throughout but if you watch very carefully, especially in the between sections, you’ll catch a quick glimpse of an inadvertent smile in the direction of his co-performers.  He can’t maintain his mask completely for the two hour duration and these fleeting blink-and-you’ll-miss-it moments show what this project means to him and that despite his infamous demeanour, he’s enjoying the evening as much as the audience.  The standing ovations are well-deserved.