Name and shame | The great bands that should never have reformed 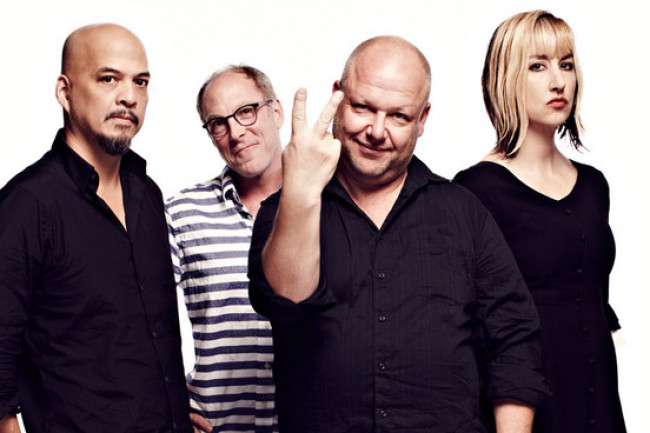 This line. It might be thin, so thin that it can’t be seen by the human eye so I can only give you a representation, but it exists – believe you me.

OK. Let’s get on with the chart. Reminder: to qualify, the band needs to have been great in the first place. So no Swervedriver, Ride, Suede, Smashing Pumpkins, Tears For Fears, Ugly Kid Joe, The Beatles etc, etc.

Also, they need to have split up in the first place.

1. PIXIES
Forget the folk who were saying how great they were when they first returned in 2004 (with Kim Deal). Myself and Charlotte (also a big Pixies fan) saw them play a sold-out Brixton Academy, and were so disillusioned. Everyone was jumping up and down and having a great time pretending they were 15 years younger. No steps forward, several giant steps back. Some folk might view rock’n’roll as a museum piece, as simple nostalgia – but not us, certainly not back then. We walked out into blazing sunshine and never looked back. That tour film they released a couple of years later was truly miserable.

2. PAVEMENT
More contentious this, not least because the band weren’t dumb enough to release any new material to try and cash-in on the cash-in, and I avoided the Brisbane show in 2010 cos I really don’t need to be reminded of the asshole I used to be, but this is a bit of a no-brainer, considering how precious and bad math-art rock and muscianly they became before the initial split. I liked ’em for the pop. Seemed like others liked ’em for everything back. Let’s refer to that section of fans as the Pavehead fans, or perhaps Radioment fans.

3. THE RAINCOATS
Even more contentious this – not least cos I saw a video of them with Viv Albertine a few years back in NYC and they sounded truly, wantonly glorious – but, once again, I did go see ’em play upon their first reformation (in 1994) at Brighton Concorde, and once again had to walk out. It was just so wrong. I was there cos they’d once been so special, so magic for me. I was in the wrong frame of mind: a friend had died (connected) and that influenced everything I did. I am willing – very willing – to have this one argued against.

Back in the day when I cared passionately about such things (shortly after I moved to Deptford in South-East London), The Raincoats were ABSOLUTELY my favourite band. One of the sweetest compliments I’ve ever received in my ‘career’ as a music critic was when Ana de Silva contacted me via MySpace a couple of years ago to thank me for “making so much good music better known”. (I’ve never known any of The Raincoats personally, beyond meeting Gina a couple of times in the 90s.) That remains so special to me. It was one of those extremely rare moments when I felt like what I’ve been doing all these years hasn’t been a total waste of space. (Song of the day – 243: The Raincoats)

4. THE BREEDERS
I don’t want to deny anyone their fun, their reliving of special moments, their opportunity to see in the flesh what is so special to them. But, once again, I walked out. Damn it. I’d seen Beyonce play the night before and the whole time I stood there watching The Breeders – the fucking Breeders, for Willis’ sake – I was just thinking, this ain’t Beyonce. Damn it. Plus, I’m not even sure I like their second album anymore. DISCLAIMER: Kim Deal’s solo stuff is so magical these days, breathtakingly so.

5. BUZZCOCKS
First band I ever saw. Damn, they were gruesome. Pete Shelley’s vocals were about the fifth loudest instrument in the mix – behind even the journeyman drummer – and it was clearly the Steve Diggle show. I am still holding out hope that I might find an occasional great post-split Buzzcocks song, though. I mean, Jesus. At one point, Shelley was just about the greatest songwriter operating in pop.

Buzzcocks at the Zoo. The drums were the loudest instrument, Pete Shelley’s voice a dismal fifth or sixth. Steve Diggle’s backing vocals were about 25 times louder, when he remembered his lines and wasn’t too busy doing his ONE MOVE (holding his guitar above the audience) yet a-bloody-gain. They played the first two albums in their entirety… ah fuck it.

I don’t want to be nasty here.

They were fucking crap. It was like watching a pub rock band (and no insult to the many great pub rock bands that exist). The two bozos on bass and drums really didn’t help. ‘Sixteen Again’ and ‘Real World’ and (very weirdly) ‘Pulsebeat’ stood out, but that might just have been me desperately clutching at straws. The singles were particularly awful, although nowhere near as bad as Diggle shitting all over ‘Autonomy’.

Maybe it was a bad night, but I doubt it. The public gets what the public wants, as a contemporary of Shelley’s once sang. And what they clearly want are the songs played with no meaning or feeling or passion, with Diggle gurning his way all across them like a soggy-arsed acid casualty. (Buzzcocks live @ The Zoo, 19.11.09)

6. AFGHAN WHIGS
You can argue this band were never great, sure. Trust me, though. Hard as it might be to believe now, they were.

7. GANG OF FOUR
Now known as the Gang Of One, they never equalled that first album. And the first album didn’t even equal the first single.

8. THE WEDDING PRESENT
Oh man. The shite they throw our way in Brisbane. There is something near creepy about a forty-something man singing his tales of teenage infatuation in front of the same thrashing guitars – albeit way more tepid – as 30 years ago. I once loved this band. And I even loved some of Gedge’s post-Wedding Present stuff in Cinerama. But now? Man, don’t look back. Keep moving. Another show we walked out on.

9. THE SEX PISTOLS
Yep… another show I walked out on. Or rather, didn’t even bother to watch mainly (see also that astonishingly ill-advised Velvet Underground reformation of a few years earlier – which came at a time when Lou Reed was still putting out albums of quite some calibre). Guess that’s the difference between me and former friends like Alan McGee (who referred to one of these reunion gigs as the greatest gig he’d ever seen). Music means something to me.

10. MY BLOODY VALENTINE
Damn. You’d really expect more from Primal Scream’s second rhythm guitarist, wouldn’t you? Unbelievable, the folk who rated this. Are they even listening to the fucking music?