My review of Too Late To Die Young Now, as rejected by The Monthly 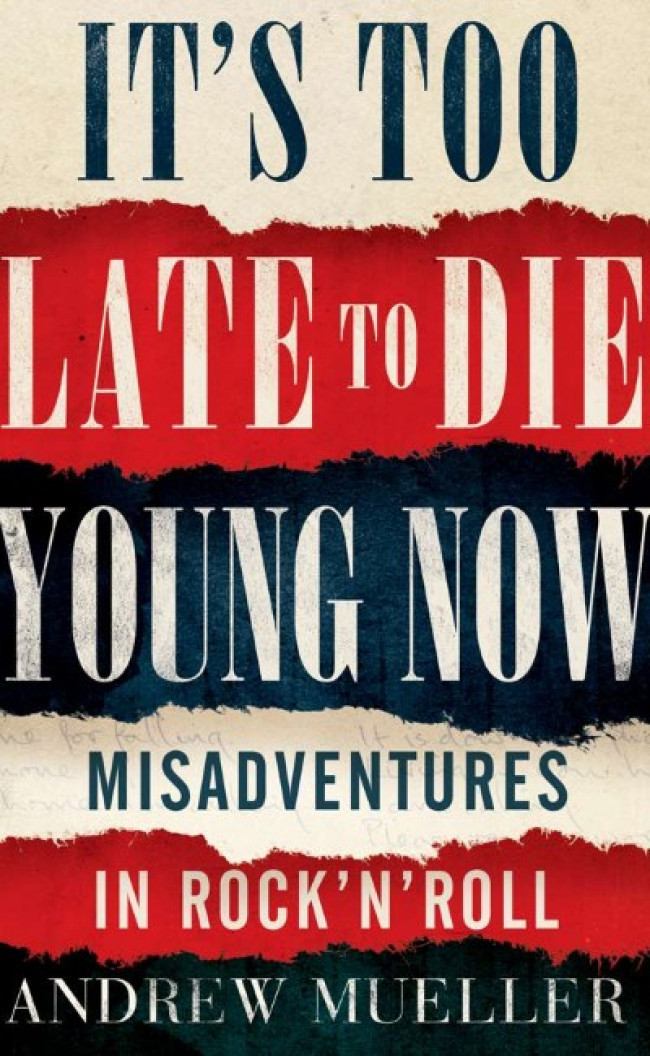 A few months ago, it looked like I might have picked up a minor writing gig at Australian literary and politics publication The Monthly. I’d been commissioned to write a review of Andrew Mueller’s biographical account of his time spent during the 90s at Melody Maker etc, Too Late To Die Young Now: Misadventures In Rock’N’Roll.

The editor didn’t like the first draft of my Mueller review – as he (rightly) pointed out, it mostly contained anecdotes that the book missed, and hence gave the impression the book wasn’t up to much. The book IS up to much, so I rewrote the article.

This time, the editor liked it and agreed to run it, after I’d cut it in half.

In the meantime, he asked me to write a (brief) Best of Australian Popular Music 2013, for which I chose to feature the Bed Wettin’ Bad Boys album. This he also liked and agreed to run, also after I’d cut it in half. Then one of his sub-editors discovered I had mostly lifted the article from a previous (Collapse Board) blog entry, and he cut up rough, accusing me of lazy journalism.

I beg to differ. I had spent around 10 hours crafting that review – it’s a well-paying gig, The Monthly, and I was keen to get it right – including a 30-minute chat with Nic Warnock on the phone, three separate (entirely different) drafts*, and copious time spent editing and thinking. I finally decided on the version that drew upon my previous blog entry because I felt that The Monthly, first and foremost, prided itself on good writing – and this was, by far, the best-written version. I didn’t feel it was any big deal it had mostly already been printed on Collapse Board (to all intents and purposes, a private blog with few readers: certainly not a commercial site). I felt that this was the way web 2.0 works, and didn’t feel I was being lazy or deceitful or anything like that as the source was easily identifiable.

In hindsight, of course I should have informed the editor first.

The upshot was, the editor rejected the Best Of article – and for good measure, refused to run the Mueller review as well. And asked me never to darken his door again.

*You can’t see the first draft. I lost that one in its entirity after I failed to save it to my computer at 1.30 in the morning.

During most of the 90s, Melody Maker was a law unto itself.

The decision as to which band would feature on its cover often took place in the arena of kids game Battling Tops – the fact so many Seattle grunge bands featured so prominently in the pages of the British rock weekly is a testament to the skill of their champion at winding a small piece of string around a plastic stick – or argued over vociferously in local hostelries. If an interview with a noteworthy band wasn’t considered interesting enough, down came the call from on high: “Make it up!” One activity involved taking the cassette tapes of hopeful bands – demo tapes – and hurling them across the Melody Maker offices to the cries of “Break it! Break it!” The debut album from arena-filling band Radiohead was one of many that suffered this ignominious fate. Noted English columnist Caitlin Moran – among several who got their break working for Melody Maker – called up her editor on her first trip to New York: “YOU DIDN’T TELL ME ABOUT MARGARITAS!” she yelled breathlessly down the office speaker-phone to general merriment. Caitlin was still in her teens.

Far from being a turn off for its readers and advertisers, such arbitrary and questionable actions were embraced. Melody Maker flourished during the final days of the “personality rock journalist” –no doubt helped by the fact they coincided with Rock’s Last Great Hurrah (Nirvana, and its attendant courtiers) and the rise and fall of Britpop (Blur, Oasis).

Former Sydney street press writer and author/journalist Andrew Mueller doesn’t detail the above incidents in It’s Too Late To Die Young Now, his engaging and lively account of life as a Melody Maker writer in the 90s. He does however recount many more: his shameless pursuit of any trip abroad going; inter-office politics that bordered on the demented; encounters with U2, Pearl Jam, The Cure and Elvis Costello; the infamous ‘Riot Grrrl wars’ (wherein anyone not claiming immediate conversion to the proto-feminist cause was instantly cast as the enemy); life as an ex-pat in London.

Mueller doesn’t shy away from the downsides of freelance life – interminable band soundchecks; trudging through festival mud: the casual worker’s insecurity and accompanying bouts of depression; his flight from Melody Maker to its arch-rival NME (and the back again) following an ill-judged article in London’s Time Out complaining about pay rates. Throughout, however, his enthusiasm and love for a tall tale shine through. And, as one of his main commissioning editors, I feature frequently.

“I made my first trip to Los Angeles to spend a few days with Courtney Love. Courtney wasn’t yet terrifically well know. She’d have been recognised … mostly by regular readers of Melody Maker, in which Everett True has been ardently championing her band, Hole. Everett nevertheless offered … what remains the most sage advice I have ever been offered before embarking on an assignment. ‘For the love of all that is wonderful,’ counselled the great man, ‘do not give that woman your home phone number.’”

Mueller’s account of how he got plucked from Sydney obscurity, working for On The Street – a tale of enthusiastic persistence, and a fortuitously-timed review of NZ band Straitjacket Fits – should gladden the heart of anyone seeking to follow a career in this “most mythologised and derided” of journalistic fields. Except, of course, that the days of Melody Maker and its motley collection of “cultural arbiters and agitators” are long gone, a distant myth now that the field has been so effectively levelled by web 2.0.  EVERETT TRUE

According to pop theorist Simon Frith, the British music press traditionally favours a “sociological response to rock, valuing music for its effects on an audience rather than for its creators’ intentions or skills”. In the 70s, when this approach was at its most potent, weekly music papers (‘the inkies’) drew heavily upon Tom Wolfe’s notions of New Journalism (later redefined as ‘gonzo’), creating the Era of the Personality Rock Journalist. This is a style of journalism where personal involvement is seen as vital to the ‘authenticity’ of the finished story.

Former Sydney street press writer Andrew Mueller joins Melody Maker in 1989, just as this era is entering its final days. For him, there could be no more glamorous an occupation than that of a music journalist – exchanging eye-mascara tips with Robert Smith on The Cure’s tour bus, arguing ideology with left-wing flag-bearer Billy Bragg, dreaming up countless bad puns for headlines. He enters MM’s London offices with the zeal of a religious convert on crack: retinas burned wide open by the parade of characters (editors, writers, “smudges”) he’s faced with. “The Stud Brothers… really did give every impression of having just returned from some remote frontier of depravity… David Stubbs really was an apparition of diffident gentility entirely incongruous in such surrounds, suggesting John Le Mesurier dreadfully miscast as Lester Bangs…”

The fact he gets to write about music and interview some of the biggest stars of the day in his role as Reviews Editor (Pearl Jam, U2, The Fall, Jesus Jones) seems almost secondary, placed next to the chance of getting one back on this parade of disparate and desperate characters existing on the fringes of the music industry. And it’s this attention to the minutiae that makes It’s Too Late To Die Young Now so thoroughly engaging.

“Deicide were not the only Beezlebub-botherers to attempt to turn the Hounds of Hell loose in Melody Maker’s office,” reads a footnote on page 103. “Dreadful Bostonian Lucifer-lovers Upsidedown Cross often called the news desk, muttering imprecations and/or incantations, which would be put on speaker-phone for the enjoyment of all present. On one great occasion, [they] announced [they were] going to cause the ghost of King Arthur to appear in the editor’s office. After a few mumbled verses, our caller declared his abracadabra complete, and asserted that the royal phantom should now be swishing Excalibur in the vicinity of [editor] Allan Jones’ desk. ‘Wait a second,’ said [assistant news editor] Mat Smith. ‘I’ll go and check…’”

It’s Too Late To Die Young Now is an engaging and lively account of life as a Melody Maker (and, after a badly-judged Time Out article complaining about pay rates, NME) writer in the 90s. Far from being put off by the writers’ documented antics – antics that often were given more prominence than the musicians they were supposed to be featuring – readers seemed to relish it. The paper flourished during the early to mid-90s – no doubt helped by the fact this period coincided with Rock’s Last Great Hurrah (Nirvana, and its attendant courtiers) and the rise and fall of Britpop (Blur, Oasis).

Melody Maker was at the forefront of grunge and Britpop – a fact Mueller sees fit to remind us, on many occasions.

Mueller also recounts much more in his cheerful, acerbic way: his shameless pursuit of any foreign trip going; demented inter-office politics; the infamous ‘Riot Grrrl wars’ (wherein anyone not claiming immediate conversion to the proto-feminist cause was cast as the enemy); and, most importantly, life as an ex-pat in London.

“For all that an Australian is conditioned to regard an Englishman as chinless, effete and duplicitous,” he writes, “a snaggle-toothed wearer of socks with sandals who probably has a collection of something, I found myself liking most Poms.”

Mueller’s account of how he got plucked from Sydney obscurity – a tale of enthusiastic persistence and a fortuitous review of NZ band Straitjacket Fits – should gladden the heart of anyone seeking to follow a career in this “most mythologised and derided” of journalistic fields. Except, of course, that the days of Melody Maker and its motley collection of “cultural arbiters and agitators” are now long gone, a distant myth, now that the field has been so effectively leveled by the rise of web 2.0. EVERETT TRUE

One Response to My review of Too Late To Die Young Now, as rejected by The Monthly