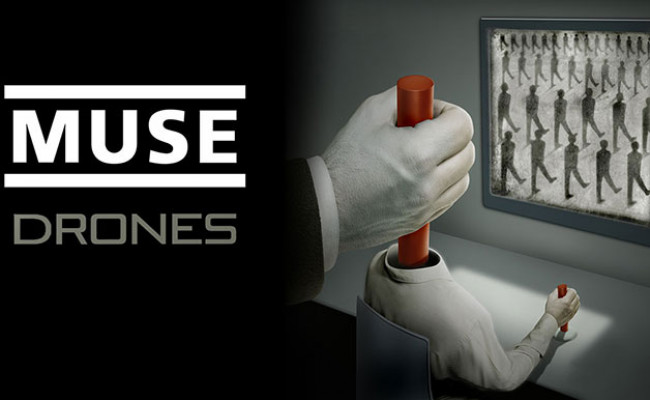 I haven’t been properly sickened by the self-delusions of the typical mainstream all-male stadium rock act since Alex Turner made a big show of wanting to smash through the glass ceiling (apparently forgetting he is the glass ceiling) or the staggering audacity that saw U2’s Songs Of Innocence digitally force-fed to our iTunes accounts. But here come Muse with their seventh album Drones, which has now topped the US charts, and suddenly the sickness starts all over again.

In my naivety I thought Drones signaled both the aesthetic sound of droning and the idea that society’s collective passivity has engendered human life as machine-like. What I didn’t realise, until NME helpfully cleared it up for me, is a third signifier: military drones. “Muse’s latest opus,” write NME, “is a dense, complex and often paranoid trip full of shady government forces, psycho military men and terrifying modern warfare.”

… What kind of album is this? Why does it sound like a blockbuster movie trailer? Why is the album’s concept intensely hyped above the album itself? And why does this concept sound so immediately full of shit? It’s a real struggle to find the sincerity behind the glitz and Muse are running short on breath as they circle that old commercial trick of hiding behind an image of anti-authoritarian subversion to sweeten their lacklustre deal.

I wonder how even Muse fans can find gratification in the puerile cheesiness of an army commando with a bomb for a head, cradling a baby that morphs into the soldier’s army suit to show… what exactly? It’s like the blind anarchism of an angsty 13-year-old, but even a cranky 13-year-old would have second thoughts on singing, “I’m gonna make you, I’m gonna break you, I’m gonna make you, A fucking Psycho!” Or the real clincher, which only Bellamy could sing with such drawn out abandon, “You’re aaaaaass belongs to me nooooooow”. Underpinned by a stereotypic blues riff that should long ago have been left only in the hands of experimentalists, the whole song reeks of a Vietnam-era mentality awkwardly forgetting it isn’t the early 1970s anymore.

Muse aren’t just angry, but they’re damn excited to show you how angry they are – which is why they’ve created a top-notch video for every single song. If army commandos are going to drill you into submission, Muse are following the fervour by drilling the album’s concept into your thick skull. Except the real concept here isn’t war or drones – those topics don’t make it to #1. It’s about what it’s always been about, pure fucking spectacle. You can just see it now, a field of thousands of middle-age festival-going fun-loving male Brit ruffians chanting and fist-pumping along as Muse play their little opus, with no one ever minding that the war can make “psychos” out of humans, that war itself is psycho… It’s stadium rock. It’s theatre.

The spectacle continues on ‘Dead Inside’ and we’re greeted with strange imageries of killing machines drifting alongside slow-mo mainstream rock acts and sexy dancers, all encompassed in an low-lit warehouse wasteland designed to conjure the barren Middle Eastern landscape and the dark fantasy of the contemporary oriental.

The effort to appear profound comes off murky and all I can ascertain from songs like ‘Dead Inside’, ‘Defector’ and ‘The Globalist’ is that Muse have found Orwell, Ballard and Huxley. Better yet they’ve found a way to strip the profound colours of the novel’s ideas to black and white and underlay it with guitar tracks that exemplify what people mean when they say the guitar is dead. As much as Bellamy always wants to act like the everyman, he’s only ever been pure fucking hyperbole. But hyperbole is the name of the culture and I wouldn’t be so bothered if Muse weren’t the normal pretending to be the radicals and getting rewarded for it.

Go ahead and call me an embarrassing doe-eye, but I’m a sucker for art coming in at the right moment, like God with a giant mirror above our little celestial earth, going “Look! Look! Here is the hypocrisy of your culture! Here is all the shit and filth and I’m going to rub your face in your own autocratic vileness”. But the dream dies when this mirror is sold back to you, not to rev up your misery, but to placate it. It’s the mirage of the Western world, isn’t it? Acting like you’re addressing bad things to avoid having to address anything bad at all.

Drones is just a tiny pixel in the large picture of mainstream musicians aligning their music with ideas and values that give an aura of subversion, but are unlikely to actually offend anyone. Muse drench themselves in the sparkling spray of emotional angst (but never political incorrectness) as they aim for their real goal, the glitter of promotional culture. By banking on the great narrative of rock music to unite the people and defy the powers that be, Muse give an illusion that’s not only eagerly cooperated with, but is also eagerly consumed. Of course this is completely destructive to rock music as an art form, but it’s positively necessary for stadium rock as a marketplace.

When you buy an album like Drones, you’re not simply buying a set of poorly conceptual songs, but you’re made to feel good about buying mainstream rock music.  Go and spend your $20 on Drones and aid art’s commercialisation and the music industry (bad!), but be rewarded with an anti-war anti-government political narrative that outweighs the guilt of the former (good!). You don’t have to do anything subversive, you just have to purchase something subversive and somehow that’s an anti-authoritarian notch in your belt. Who knew social and political justice could come at such a cheap price?!

What is truly strange is that drones is an apparently ‘safe’ topic. Anti-drone and anti-war sentiments are traditionally the houses of lefties, hippies and nutters, so how have they slipped into the ‘legitimate’ realm of stadium rock? Issues of foreign policy, war, inhuman governance, the feeling of helplessness against power structures that you frustratingly reproduce every waking moment, are direly important things. The fate of the world rests on these issues. Yet the Muse line simply goes something like globalisation + technology = woe. It’s “four legs good, two legs bad” all over again.

The sincere hate of drones is welded to a dislike of technology and war throughout the album, making what is a riveting and complicated history of modern technology into a mawkish binary melodrama. Maybe Bellamy should add Zen and the Art of Motorcycle to his reading list. A fine critique of modern contemporary rationality, the novel tells us how much of the distress people feel from modern technology stems not from the technological object itself (the car, the computer, the drone), but the inadequacy of the thought-style behind technology; the way technological thinking appears to be a cut and dried, systematic, emotionless conception of reality.  What we need is a new conception of reality and new ways of articulating and living in this strange new world. But this might be too subtle for Muse. Whereas I like the complexities of the grey areas, the incalculable plots, finding the real systems compared to the false illusions, Muse prefers something along the lines of, “Men in cloaks, Always seem to run the show, Save me from the ghosts and shadows, Before they eat my soul”.