Mothers, From A Distance 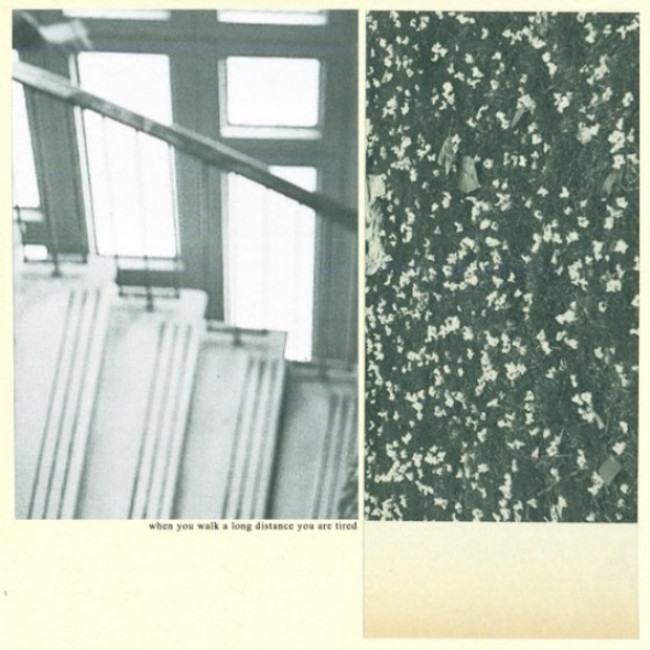 Rarely have I so desperately wanted to understand a piece of music as with When You Walk a Long Distance You Are Tired. I once had a nightmare in which my vision was blurry and I could not focus. Listening to Mothers is a bit like that: I know there is something, but I cannot see it, and if I could just see things a bit more sharply everything would be fine. Even the album title seems to be a taunt. How can such a simple statement describe such a complex work?

I turn to the lyrics to find the answers. Most songs in the world are about feelings, they look at the outside of the world from the inside of the mind. But Mothers breaks these rules and somehow manages to turn their songs into an out-of-body-experience. Compare these lines from the second song, “It Hurts Until It Doesn’t”: “I felt alive for a little while / But when I died / I had the time to notice / I was crushed by the weight of my ego / But never honest enough to say it”. Everyone dies their own death, so there is something unsettling about Kristine Leschper describing it as if she is watching it from the third-person perspective, like in a dream, while using the first-person pronoun ‘I’ all the same. A disturbing mismatch between image and word. Or later in the same song: “I don’t like myself when I’m awake”. But we cannot possibly observe ourselves while we are sleeping. We are not ourselves in our dreams. And don’t get me wrong, despite this distancing effect in the lyrics Mothers’ music is deeply personal, not least because of the emotion that shows in every word Leschper sings.

Related to this is the ‘uncanny valley’ effect of some of the lyrics, with their numerous references not to complete bodies but to isolated parts. (Lady Lamb the Beekeeper does the same thing in her songs). On ‘Too Small For Eyes’, there are lines like “I hate my body / I love your taste / Bird stirring in my chest / You give and take away” and “Restless limb, restless mind / How time will test its teeth”. Later on, we encounter more and more of those close-up images. “One hundred pennies underneath my tongue”, “your pin-pricked finger”, “Almost close enough to taste her bite, but not quite”, and the most beautiful, “I gathered twigs between your eyelids until they fell between your eyelashes”. Disconnecting the body from the mind by cutting it up, abstracting and depersonalising it, only proves how deep their connection really is. The body is our connection to the world, through which we feel pain and love and tired feet.

And sometimes that connection is broken or cut off, and that is when the lyrics start getting darker and more violent. The last line of ‘Lockjaw’ sent a shiver down my spine: “I cut out my tongue / Seeing yours would speak / For the both of us”. It comes to my mind that Sharon van Etten sings something very similar in her ‘Your Love is Killing Me’, “Cut my tongue so I can’t talk to you”. And while Van Etten is a lot more direct and dramatic, the same themes of toxic love are present on the songs on When You Walk a Long Distance You Are Tired. They reveal, in shattered fragments, a broken and painful relationship. Not only relationships between persons, but also between the mind and the body, or that of ego with self-doubt. Everything that I mentioned before – the distancing, the abstraction of the physical – is a way to deal with these toxic elements in yourself, and overcoming them.

All the way through, Leschper’s voice is like a scratched piece of vinyl bearing the marks that indirectly translate into the story of that long and troubled relationship with the world that is life. Sometimes her voice shivers and at other times it breaks, but all the way through Leschper is determined and strong. She sounds like the album itself or the act of recording. It is the metaphorical long distance she is walking, slowly growing tired and old. At the end, I don’t know if I have understood everything, or even a tiny bit, of the implications of this pilgrimage. But as always, it is only after the journey that one realises it was never about the destination but about the experience. With Mothers, that experience is purifying, transforming and ever-intriguing.

Mothers’ LP is out now on Witchita Recordings, and you can buy it here.

Related link:
Mothers, From Up Close