Miley Cyrus at the VMAs | Shake a Tail Feather, Baby 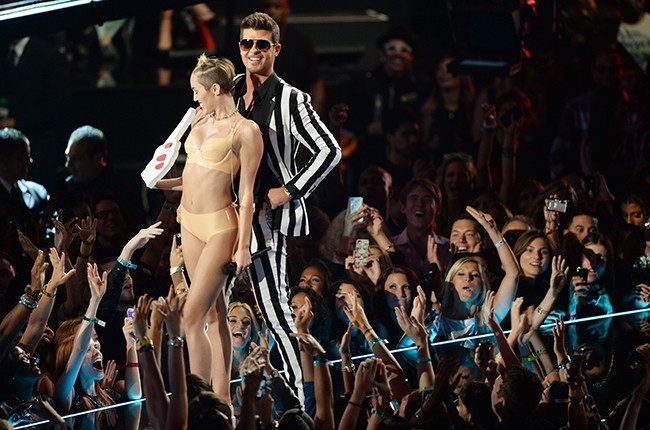 [Editor’s note: it is occasionally my habit to grab conversation from Facebook and re-post them on Collapse Board… with the author’s permission, of course. This is one such occasion: it seems Mr Thicke, and those who associate with Mr Thicke, are causing a great deal of conversation and consternation. Hopefully, this is to the good. Oh, and if you haven’t read CB’s take on Mr Thicke, then do so. It’s a great read.]

The Miley Cyrus stuff going on today is very odd, I posted something earlier and took it down, because, on one hand I just don’t care and on the other, I didn’t want to spend all day moderating a discussion on some uninteresting pop star. I really used it as an excuse to post a work by Cut Hands and voice an opinion about the mise-en-scène of the unconscious as represented by the giant teddy bears in the MC clip that I saw. But having read the media today (while fleeing from the banality of federal politics and the imminent election here), and seeing such a degree of apparent outrage and opprobrium directed towards a 20-year-old pop star, I’m increasingly fascinated. Not because I ‘care’ about music or because I find her performance interesting, but because some people (journalists, commentators, punters and friends) seem genuinely ‘offended’ or ‘annoyed’ by her, or by something about her.

But watching the footage it seems to me that the biggest ‘outrage’ manifested in this performance is that she seems to be so damned happy to be shaking her ass while also sticking her tongue out (images of her tongue hanging out dominate – just do a Google Image search). Booty shaking is nothing new of course, it echoes, for example, various dance hall moves of the last 30 or so years, and erotic dancers have used such moves forever. The tongue – however – defies simple classification, it exceeds its own function, not merely an organ for taste but also for licking and with its own catalogue of symbolic gestures. These can dance through (for example) the defiant, aggressive, playful, grotesque, erotic, disgusting and so on, the exposed tongue can be played over the lips, moistening them, or it can be pushed out to indicate disrespect and defiance. The fact that she plays on this – her tongue emerging again and again, slipping out (like the pert nipples of other pop stars) is fascinating, not because she chooses to do it, but because its such an unusual gesture in pop music (other than the Rolling Stones logo and KISS, of course). That she does so while shakin’ her rump becomes some kind of affirmation: she could, grinning and slurping, be simply mocking the cultural understanding of sexuality, or she could be offering the spectacle of the joyously eroticised female. Most importantly, perhaps she is not merely playing a single role but playing multiple roles and with multiple meanings at the same time, laughing and eroticism are closer than realised.

Perhaps this is why there are so many ‘offended’ commentators/viewers etc, the confusions that her performance generates can only exceed the answers that her largely uninteresting work seems to offer. I truly can’t enjoy her music, but the fact that she generates appalled comments, moral outrage and confusion seems to me to be something to be savoured.

Some links for you all. Outraged journalists.

7 Responses to Miley Cyrus at the VMAs | Shake a Tail Feather, Baby