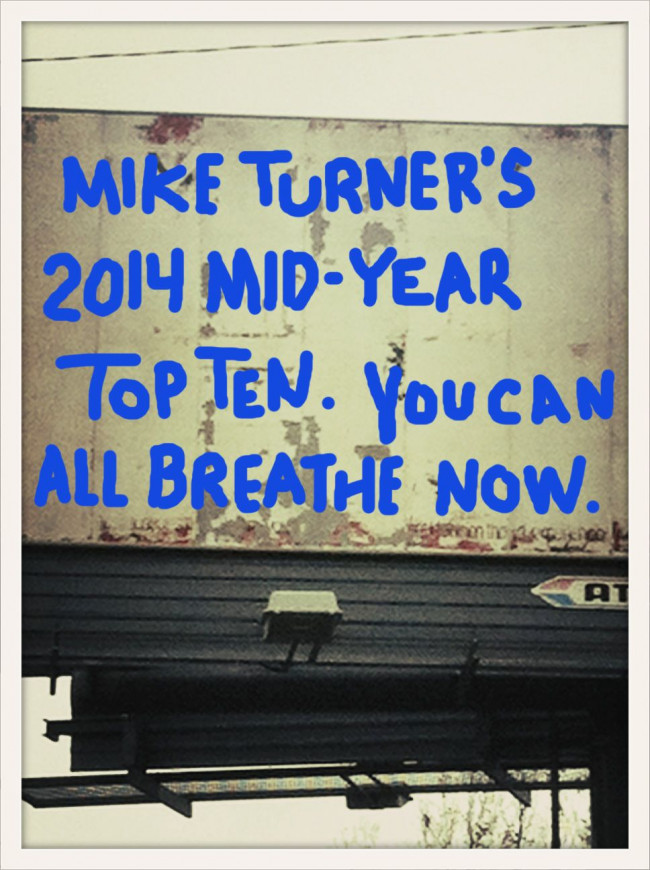 2014 has been a super busy year for me and I kinda stopped following as much of what was going on and the up and coming buzz bands than in years past. My top ten picks of 2014 seems to be made up of older bands making a return or bands that just were just found via going to shows, some bandcamp link, a cool looking 7″ sleeve, or random cassette that was floating around. I have spent the last week trying to look around and see what is buzzing and you know, nothing has struck me anywhere like this stuff here.

Pixies I’m gonna get this one out of the way right at the front (we all know Everett is not a fan of the new record). The new Pixies album, Indie Cindy, (yes horrible name, I know) is not as bad as you have been told. Sure there is no Kim to be found, but to be honest she was almost written out of the band after Doolittle. If you followed the Frank Black solo records then this record will make sense. If you didn’t keep up with his solo records then chances are you were/are thinking it doesn’t sound like 1993 and now you’re all mad or upset. “THIS ISN’T THE PIXIES.” The videos are horrible, the album title is horrible, the artwork lacks, but the songs are there. I saw them live on the last tour and the new material works right next to the older songs flawlessly. I know I’m not selling this thing, but give it a shot. If any band around today made this record that was starting out that wasn’t the Pixies then it wouldn’t be marked the way it has been.

Guided By Voices I had pretty much given up on GBV right before their break-up. I didn’t really keep up with them after reforming either. Pollard has never been known to have a filter. It’s just record it, put it out, move on to the next song. With that sometimes it felt like way more duds than hits. I might find 5 songs out of 20 on an album that blew me away. That was the case anyway until Motivational Jumpsuit and Cool Planet. Both albums released this year are hitting 18 or 19 out of 20 tracks being potential hits. The band is on a streak. Knowing how much of a baseball nerd Pollard is I bet they are all not changing their socks or whatever superstition there might be to keep the hits like this coming.

Kitchens of Distinction 20 years is a very long time between albums. I never thought I’d hear a new Kitchens of Distinction album, but here’s the new album, Folly. It picks right up where the band left off. Heads and shoulders above the rest of the dream pop and shoegaze pack leading the way with maybe the best lyrics from that scene. It doesn’t sound like they ever stopped playing together. Now here’s to hoping someone will finally press The Death of Cool on vinyl. I know this was a 2013 release, but it’s only been available in the states this year so it counts.

Kim Deal Speaking of the Pixies above, anyone still crying over Kim leaving the band are probably the same people who have yet to pick up her collection of self-released seven inches that have come out over the last year. Single #4 “The Root” w/ Morgan Nagler brings to mind the same chemistry not since heard since her duet with Tanya Donnelly on the third This Mortal Coil album or with Kurt Ralske duet on the second Ultra Vivid Scene album.

Chain & the Gang Mr. Ian is back and still spouting the truth and his own newer and more current version of gospel ye-ye on the album Minimum Rock N Roll. Still the voice of the working man and woman, the reading man and woman, and lighting up the eyes of all of those in the gutters. In a time where it’s all bought and sold, Ian teaches you how to own it.

Nope Leeds krautrock wonders might have created my favorite record for the year. I could go on and on about this band, but just watch the video ‘cause even though it is from two years ago it speaks volumes. The album is called Walker and not many were made so don’t wait another minute. Go buy it now.

Millie & Andrea Modern Love label-mates Andy Stott (Andrea) and Demke Stare (Millie) team up to create Drop the Vowels, a record I played for weeks straight every day, sometimes on repeat for hours. So many textures. This is a record that makes other records in your collection seem utterly pointless at times.

Fairhorns The Fairhorns are from the UK, maybe even Bristol I think. It doesn’t really matter. I think a member of Beak >> is in the band, or maybe not. All I know is I want more and more of this and less of all the other junk I get pushed on me on a daily basis.

I Heart the Monster Hero This might be the most straightforward band I’ve enjoyed in a long while. They are from Dublin, Ireland, and I love the fact it’s not all hipster and I can hear traces of Bongwater & Granddaddy in their songs. Just good pop songs with no pretension through and through. The kind of band I want to hang out with and talk about BMX, comic books, horror movies, or cheese crackers, just everyday stuff.

Cancers The only band on the list to be found just by being around in Athens (Disclosure: I was once part of a label that released singer & guitarist Ella’s other band Dead Dog and had booked Dead Dog for a few shows). I first heard the 7″, then the cassette, but the new record coming up was recorded by Jack Endino so it sounds rather big. I’m more a fan of the rougher side of this band, but if this album is anything like the tape and 7″ it will be getting played like crazy. Reminds me of a breathier stripped down second album Velocity Girl or a cotton candy Spinanes.