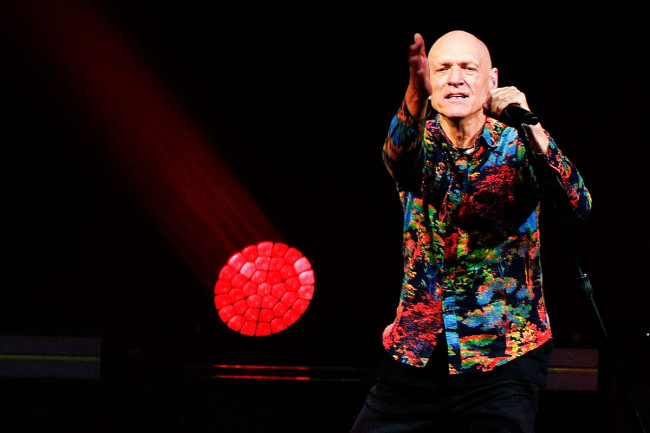 The end. Well, it’s as good a place to start as anywhere isn’t it? A wet Wednesday night in April at the Riverstage for the Brisbane show of Midnight Oils final tour probably isn’t the ideal send off everyone dreamed of, but that’s La Niña for you.

In the UK, Midnight Oil occupy that strange position of largely being one hit wonders thanks to 1987s ‘Beds are Burning’ (although to be fair, ‘Blue Sky Mine’ was a minor hit in 1990). For a generation growing up in late 1980s UK, they’re that band with the weird-looking, gangly, bald singer, with the weird voice and the weird dance moves.

In Australia, it’s ever so slightly different. In Australia, Midnight Oil are a band whose Diesel and Dust album (including the aforementioned ‘Beds are Burning’) was judged as the greatest Australian album of all time in a book that was put together a few years ago. It’s strange listening to it knowing the place it occupies in Australian music history as it is the very essence of the sound of the late 1980s.  Personally, I think its follow-up, Blue Sky Mining is equally as good. The purists will probably tell you that their breakthrough album, 1982’s 10, 9, 8, 7, 6, 5, 4, 3, 2, 1 is the band’s highpoint, when they still had post punk influences coming through, before they went all 1980s stadium rock.

Setlists from the shows on this final tour to date have shown the band putting heavy emphasis on songs from their last two albums, with inclusions from 2022’s Resist and 2020’s The Makarrata Project (2020) making up more than a quarter and on some nights almost a third of the songs they’ve chosen to play to some of the final audiences to see them in Australia.  It shows that they’re not going out only relying on  memories of the good old days.

Brisbane is different though, less songs from these latest albums and a more even split between a number of albums. With their next show being in a couple of days at Blues Fest, this could be this a warm-up for their headlining appearance at the Byron festival but the setlist from that show suggests not. Once again the band are able to effortlessly mix and match from their extensive catalogue.

Brisbane also gets less songs overall than most of the previous shows on the tour. The Riverstage’s 10pm curfew is referenced a couple of times during the night, as it often is by acts playing the venue. I can distinctly remember Nick Cave moaning about it last time he played here. It’s a problem with a simple solution of starting earlier but the musicians never seem to consider this as an option.

Playing less well known and ‘new’ songs is the same for everyone who attempts it, starting with them brings the strange experience of a largely muted response to a band arriving on stage and commencing the last show they’re expecting to play in the city, rather than a more expected burst of euphoria you might expect had they opened with a crowd-pleasing favourite from back in the day. The crowd doesn’t have to wait long for their desires to be satisfied with ‘Read About It’ following next.

As with all the shows on this tour, Midnight Oil open with songs from their latest album, ‘We Resist’ being the opening song each night, and followed for tonight’s show by ‘The Barka-Darling River’. Resist, is a fine album, as is its immediate predecessor, The Makarrata Project. Without the weight of the cultural baggage of growing up with Midnight Oil, they’re both albums up there with their earlier work.

Despite expectations that there would be a fair amount of between-song talking by Peter Garrett, he generally keeps it to a minimum, with only a few longer monologues over the course of the night. Instead the songs are rattled off, one song ends, the next begins straight away, with barely any time to take in the applause at times. After introducing backing singers Leah Flanagan and Liz Stringer, Garrett talks about how the trip up to the Sunshine Coast the previous weekend was spoilt by all the yellow roadside adverts for a certain minority political party, referring to its leader and benefactor as ‘Fat Boy’ and mentioning about how he [Garrett] spent years in parliament but never managed to fall asleep like Clive Palmer, before the band launches into ‘Dreamworld’. The band may be mixing up the setlist each night but there’s no let-up in quality, there’s no loss of momentum. ‘US Forces’ and an extended ‘Short Memories’, with Jim Moginie providing an Aladinsane piano part are mid-set highlights. The sound throughout is crystal clear but the curse of the Riverstage, and indeed all of Brisbane’s outside venues, is that the volume just isn’t loud enough.

Watching Garrett during ‘Only the Strong’, you can’t help but admire his energy levels and the song is further enhanced by the vitality of Jim Moginie and Martin Rotsey’s twin guitar attack at the end. Seeing the band play live for the first time, one of the main takeaways is just how well Moginie and Rotsey’s guitars complement each other, regardless of whether both are playing electric or there’s an acoustic guitar in the mix.

‘Blue Sky Mine’ still sounds like it was a song that could have been written yesterday, the line about nothing being worth more than a hole in the ground still rings true in Australia, possibly even more so more than 30 years after the song was written. It’s followed by ‘The Power and the Passion’, which comes complete with a Rob Hirst drum solo that takes in the water tank that towers above him and his drum kit. It seems that even away from Metal, you can’t escape a drum solo.

The night’s most powerful moment is Garrett’s soliloquy about the coal industry being one of the great lies in Australian history, which introduces ‘Beds are Burning’.

“We’re going to keep playing until they turn us off,” Garrett proclaims as the band launches into ‘King of the Mountain’, before ‘Forgotten Years’ rounds off the main set. Finishing with two songs from the Blue Sky Mining album at the end, helping to support my view that it may be their best collection of songs.

Having only delved into their albums, ‘Hercules’, from their 1995 ‘Species Deceases’ EP is not a song I’m familiar with. Having read up about it post-show, it turns out the extended play was their only Australian Number One single. It’s a surprise to find that out given what happened with the band in the second half of the 1980s and also given how post-punk the song is. Moginie’s squally guitar parts are almost reminiscent of Tom Morrello.

With a photo of The Saints’ Chris Bailey projected onto the back of the stage and an introduction by Garrett that they didn’t know him very well, the band play ‘Know Your Product’. It turns out to be the last song of the night.

It’s not just that ‘Know Your Product’ is one of the great Brisbane songs or one of the great Australian songs. It’s just one of the greatest songs. Thanks to the weekly UK music press, I knew of The Saints and The Go-Betweens before I could point to Brisbane on a map. Thinking about that some more, it’s highly likely that the first time I ever knew the existence of Brisbane was in UK music press writings about those two bands. Although some of the crowd know the song, it’s clear from the response that a large proportion of the audience don’t. Both the Saints and the Go-Betweens went largely under the radar in Brisbane during their respective heydays and some things never change.

The band do a passable version, although so much of the song’s success has always been due to Chris Bailey’s voice, which can’t be replicated. It seems an odd choice to end on and it makes the night end on a slightly flat note. Whether or not it was meant to be the last song of the night or whether it was too close to the 10pm curfew to play another song, I don’t know. Having not had the benefit of photographing from the photos pit, I didn’t get treated to a view of the planned setlist for the night. As this is supposed to be the last song that Midnight Oil will play in Queensland, it was their last chance to play one of their own songs for the 10,000 people who have come to see them tonight.

I wasn’t there at the start, the middle, or the comeback. I was only there to see Midnight Oil at the very end. In an alternative life, maybe I would have seen them earlier in their career and more often. But being there at the end is better than living in regret at never having gotten to see them play live.

In the press release that accompanied the details of this last tour, each member of the band provided their own views on the tour, with Jim Moginie noting “These will be sad and beautiful gigs but luckily we’re still capable of blowing the roof off any stage and that’s what we intend to do.” If this was their intention for this tour, they’ve achieved it with aplomb. Luck doesn’t really come into it.

Even at the end, Midnight Oil are an excellent live band. I think it’s unlikely that this ‘final’ tour will be the last we’ll see of them. They’ll always be an event, an anniversary, a festival spot or maybe even a residency at a smaller venue that will tempt them back to the stage but without all the day-to-day chores of touring. Those will be definitely be shows to look forward to.