Martha – Blisters In The Pit Of My Heart (Fortuna POP!) 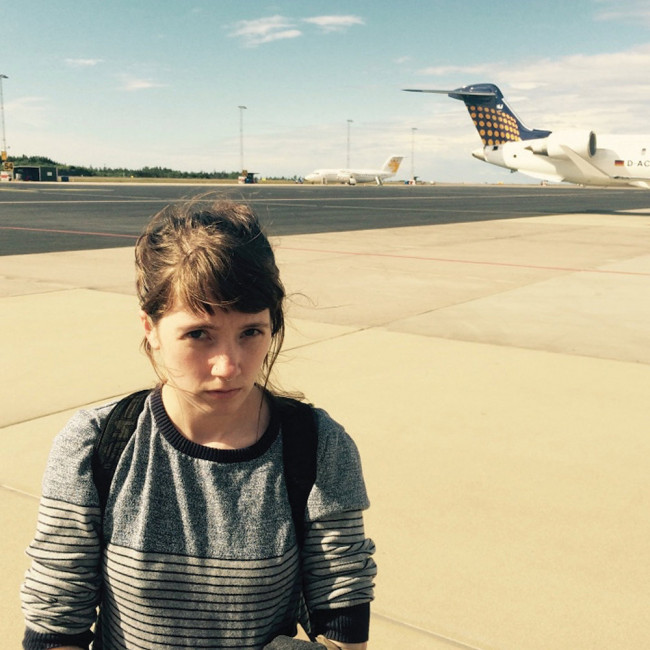 I fell in love with Martha because she had sunburned shoulders, just like my girlfriend.

Their downbeat admission that “the autumn forecast’s looking dismal again” somehow proved irresistible. And when ‘Ice Cream and Sunscreen’ suddenly sped up, my heart did the same, singing along to all band members of Martha bursting out in unison: “I was watching the skin peeling off your sunburnt shoulders, I know / I know you only melt in the middle like ice cream and sunscreen / Blisters in the pit of my heart, blisters in the pit of my heart”.

Martha come from a town called Pity Me (yes, really), which looks exactly like you would think: uniform small houses everywhere, small useless patches of grass, cars parked in front of garages. Their county, Durham, voted to Leave. Somehow, Martha are known as a political band (whatever that is), embracing anarchism and DIY principles. But if their music is political, then so are most songs by Belle & Sebastian, or virtually every punk song. And in fact, they are, because political art does not need to be about politics. I hate slogans like ‘the personal is political’, but it’s close to the truth: the stories of boys loving boys or girls loving girls, of smart kids at school getting bullied, of the dismal jobs people have or the mental health problems facing them, of simply going to the supermarket, those stories both reflect and shape our collective (and therefore political) world.

Supermarkets really are more important than you think. They’re the dividing line of society, because whether you shop at Tesco, Waitrose or Lidl tells everything (as countless ‘How Posh Are You?!’ Buzzfeed quizzes can attest). Some of the greatest punk classics are about them: The Slits’ ‘Shoplifting’, The Clash’s ‘Lost in the Supermarket’, The Raincoats’ ‘Fairytale in the Supermarket’. And let’s not forget about those famous lyrics “I took her to a supermarket, I don’t know why but I had to start it somewhere – so it started there”, of course from ‘Common People’ by Pulp, exposing and ridiculing English class divisions. Add Martha’s own song featuring supermarket romance, ‘Precarious (Supermarket Song)’, to that list. Not only does it portray the precarious living people make in an austerity economy, facing workplace harassment and crippling uncertainty, it also contains the funniest pick-up line ever: “I’m an unexpected item / In your bagging area”.

Blisters in the Pit of My Heart is overflowing with these tales of what society deems ‘misfits’. The woman in ‘Do Whatever’ who is “too polite” at work – undoubtedly because if she wasn’t, she would be called bossy. ‘The Awkward Ones’ has a title that speaks for itself, but the lyrics are too good not to quote. “We were the ones who always felt awkward, socially cornered / And I still feel the same / Still dreading the laughter, like what does it matter? / It’s not what I’m after anyway.” Well, life is full of shit, innit? If it weren’t for love, although that’s the confusing one. In any case, Martha’s music isn’t miserable. Somehow there is comfort in a line like “But it’s not like we all have to fall in love / Just think of it like it’s a sleepover club” – spoken in a gender-neutral toilet – or even in the fated supermarket romance.

And then there are the killer choruses that might contain the most depressing words, but certainly don’t sound like it. ‘Chekhov’s Hangnail’, for example, with its “It might seem like we’ve lost the battle” refrain, is really the catchiest thing there is. “If no one wins the war then why keep score?” But my favourite loudly-sing-along bit on the album is the broken ballad ‘Goldman’s Detective Agency’, which is a song that for once isn’t about love, but about detectives, except that of course it totally is about love and nothing else. To me, most of the lyrics are cryptic nonsense, but then the simple plea “Come on, won’t you be the one to help me out” is so powerful and heartbreaking I cannot for the life of me imagine that Martha will never fill the Wembley Stadium with thousands of people singing along to this. (But then again, they’re far too poetic, too clever-intellectual, too DIY, too a lot of things). That line shows love as a necessary pact against life, a survival strategy without which one cannot live.

Luckily it doesn’t matter whether they play Wembley or the Oxford East Community Centre. As long as they play somewhere, and in my head and heart, and maybe occasionally in a town that’s easy for me to reach, I’ll be more than happy to mouth the words or sing along. Help me out.

3 Responses to Martha – Blisters In The Pit Of My Heart (Fortuna POP!)