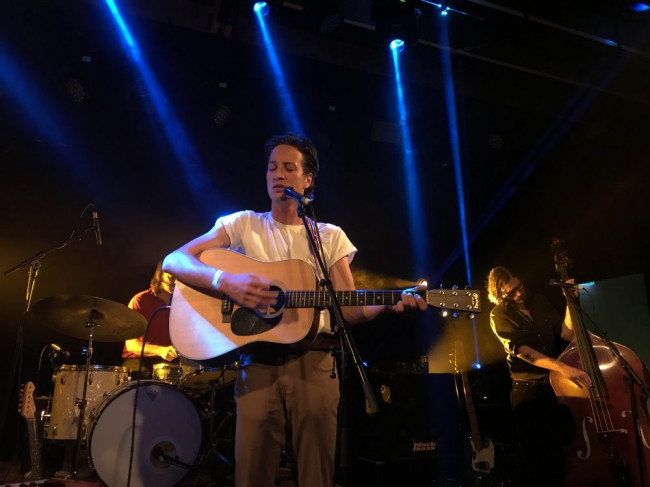 Here in Australia we love to claim New Zealanders, especially musicians, as our own. It’s pretty safe to say that we’d kill to brag about Marlon Williams being an Aussie. I mean, he was based in Melbourne for a while. Let’s face it, he’s a prodigy. A rare vocal genius and still only 26 years of age. No wonder his gigs sell out in minutes and he’s been touring almost constantly since the release of his self-titled debut album in 2015.

I’m fortunate to be at his third show at Howler in Melbourne, the final incarnation of his current tour with The Yarra Benders (Dave Kahn, Ben Woolley and Gus Agars). Early next year he’ll embark on the promotion of his second album, Make Way For Love, returning to the life of a self-professed ‘road dog’ through Australia, New Zealand, Europe, Canada and the U.S. again.

Williams is first spotted in the audience, watching his support act, Archer, and by the time he takes to the stage, the punters are crammed into the small band room, probably drinking more cold beers on this hot night than a usual Monday. Williams has a remarkable presence, his sincere dark eyes and coy smile suck you in, but it’s his voice that transfixes. That voice. Mellow but effortlessly powerful, sweet and soulful. He’s outrageously talented, but the band do complement him; Woolley’s harmonies are right on, and the guitar duels with Kahn are like two best buddies jamming in the garage.

They start with a new ballad, ‘Come to Me’, and the sultry favourite, ‘I’m Lost Without You’, pops up early to engage the crowd. It’s not long before Williams’s voice is well and truly warmed up for ‘Dark Child’, a personal highlight. When he hits those sustained notes in this brooding song of bereavement, he channels and challenges Roy Orbison, and the lead guitar break he shares with Kahn is fiery. They’re looking sweaty and we’re feeling it.

He tells us we have to bear with them through the new material and laughs with the band over a few glitches, muttering we, the audience, won’t know they’re making mistakes. It’s true; we don’t. He sings, plays piano and adds a few samples to ‘The Fire of Love’, which is gritty and impassioned. He makes a cover of John Lennon’s ‘Jealous Guy’ very much his own. ‘Vampire Again’ is fun, though I wish he’d dance how he did in the video, and ‘Party Boy’ is a more rocky departure. The last song of the set is ‘Make Way For Love’, another personal highlight. I realise there’s more than just American influence on his music with its dreamy swaying Polynesian sound, no doubt from his family roots. Beautiful from the first listen and makes you salivate for the album release.

He returns to the stage with Archer and Woolley for a singalong round the mike, a sweet rendition of Elvis’s ‘Love me Tender’. The band rejoin him on stage for two more new songs, the ultimate being the incredible and intense ‘Portrait of a Man’. It’s wild but tender, gravel but chocolate, a barrage of emotion and relief. Williams crouches on the front of stage so close I could touch him, his breath almost palpable.

Life is too short and so is this. It’s over at a respectable Monday night hour. It’s been a privilege to listen to a singer with such extraordinary ability. Yet this tall, fine, Tim Burton-esque character seems so down-to earth. All of us awestruck people are smiling as we file out, no doubt counting the days till Williams returns to launch his album at the Forum Theatre in May.