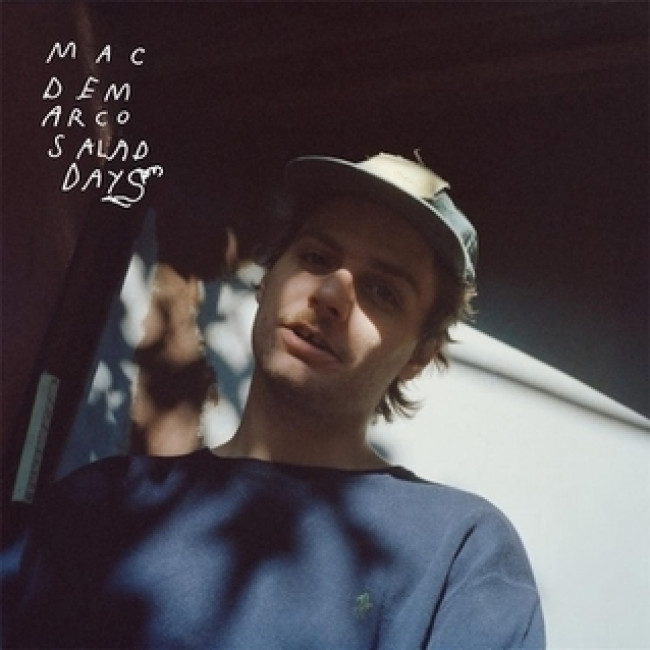 Music on the American college radio waves lately tends to fall into three basic camps – garage rock revivalists (Perfect Pussy, Bleeding Rainbow, and I think that most unfortunately named Dry Heaves fall here, too); vague, endless beats (DJ so-and-so); and distracted abstract dreaminess (that’s you, Fear of Men). The good stuff slips between those camps. Mac DeMarco is not the good stuff. He set up a tent under the third camp.

My main beef with the new college radio is that it offers nothing but sensation. DeMarco, in particular, offers naught but this balmy tropical tone and a hammock to lie in. Lazy song titles, lazy subjects, lazy songwriting, lazy assumptions of masculinity. You can see the crowded beaches and the clusters of topless frat boy students passing ‘round bottlenecks and hear them plotting nothing but which bars to crash that evening.

Or, closer to home, I can see those cheesy types, the ones with the eternal grins and chummy facades, the kind whose every word fits into some megaphoned brag, who only need a girl for arm candy ‘cos obviously the man always knows what’s best. He’ll spin this in the car and say, “Yeah, this is way more chill than that Lorde crap you’re into. He’s so non-pop, right? Almost kinda Hawaiian.”

(Mind, this is me projecting what I’d suspect such a student would say, but I’m around lots of these types, y’know. And none of them ever say one intelligent word about music, if they say one at all.)

Anyway. The tone of this rekkid ain’t too hard to convey to the music literate like yerself. Think, for a moment, that deceptively breezy jangle of “This Charming Man”, but without the urgency or, well, the “deceptively”. Consider, too, the feel and texture of Felt, especially those first albums, but this time without the intrigue, thought, or effort. If, even in spite of my blatant warning, you still picked up Mr. Malkmus’s un-wigging Wig Out, you’d recognize the smug fraternal contentedness that permeates these Salad Days. You see this everywhere – blokes calling other blokes “my man, my brother” to impose their company on others, when in fact the fellowship is a hollow one based only the equally hollow assumption that all men bond on some intrinsic level of manliness.

Take it slowly, brother / let it go, my brother

When I first saw Mac peering down at me from under the shelf (look at him, the self-entitled bloke – the shot is canted so that’s he’s UP THERE in his little corner), I thought maybe he was some vaguely urban character, with some raps or a beat or something remotely curious. Nope – well, see, he’s actually the SUBurban type, and by that I mean one who’s eternally bored with day-to-day life. The title track – which is surprisingly Kink-y – writes off an entire year as if it were merely a bad report card.

What kills me about Mac’s writing, though – and what reinforces that godawful hollow bro-hood I mentioned earlier – is that at least four of the ten tracks are about one dude advising the other dude about how to manage his ladyfriend: “Let Her Go”, “Let My Baby Stay”, “Treat Her Better”, and “Go Easy”. Half of those reference the aforementioned chick as “MY baby”.

Out of these four, “Let My Baby Stay” could most easily be misconstrued as (someone forbid, I know not who) “sensitive”, especially since it’s the inevitable sleepy ballad track of the LP. But it’s all possessive, y’know – ME ME ME. The only value placed on the woman is how much she fulfills him.

I was made to love her
Been workin’ at it
Half of my life
I’ve been an addict
And she’s been good to me
Far as I can tell, she’s happy

(This video irks me to no end, mainly b/c a woman’s singing along – ARGH)

Wow! This is rich! So the girl has a right to stay (wherever the hell it is we’re staying at – the song never specifies) because she completes you. Not because she may contribute to your bros’ conversations, or bring some idea to the table, or I dunno play the drums for a little while. No, in this abstract situation that could be a room or a gig or a Congress meeting for all we know, it’s because “I would be feeling lonely/separated from my one and only”. (Actually, the line is “And when would I be feeling lonely/separated…”, which implies that he skipped grammar school to be with his one and only.)

Both “Treat Her Better” and “Let Her Go” assume that the man has the ultimate control in a relationship. The former – again, “This Charming Man”, but dirge-like and without any desperation/struggle whatsoever, with strains of dreampop glaze strained and processed into formulaic mellowness – is another one of those bro-to-bro heart talks: “Hey, man – I know you’re your brother’s keeper/but that can’t be, the way that you treat her”. Vagueness works sometimes, but with such a mundane topic as boy-girl relationships it’s so damn frustrating here. And why “treat her better”? “If having her by your side is something you enjoy.” ME ME ME again. Mac hints at the possibility that the chick has the power to break the bond –

– but then this conflicts directly with the even-more-decisively-suburban-perception-of-tropical “Let Her Go”, which contains the most tired simile imaginable – “Growing by the hour / love just like a flower / and when the flower dies, let her go”. And this again could dangerously be construed as “sensitive”, but instead this implies that only the man can make that executive decision – that she ain’t goin’ anywhere, in other words, until he gives the order, and that she, meanwhile, can remain glued to his side with simple “I love you”s.

To Mac’s credit, one track stands out. “Chamber of Refletion” is a still drugged-out, lazy good-for-nothing number, but something about merging a meaty plodding backbeat (which, for the first five seconds, could be Led Zep’s “When The Levee Breaks”) with the sleazy come-on of a seedy 80s-themed club actually built in the 80s somehow works with me. Partially because Mac manages to admit here – via both tone and lyrics – that not every moment can be chill and sunny, that loneliness (i.e time w/o yr bros) has some value.

[YOUR ROVING SHORT ATTENTION SPAN LANDS HERE FOR THE TAKE-AWAY.] At any rate, if I look like I’m diatribing here, it’s because I am. Mac DeMarco has not read any books for leisure in the past year, either that or is one of those meatheads that – like Hayley Mary, really – interpret music only as pleasure, and deny pop its powers to change identities, re-define realities, and explore new worlds. Salad Days is as empty and unsatisfying as its name implies. If “drug-addled” was what Mac had in mind, then lo he’s done it, and has cooked a dull, lucrative opiate that blocks out so many dazzling rays of independent thought.