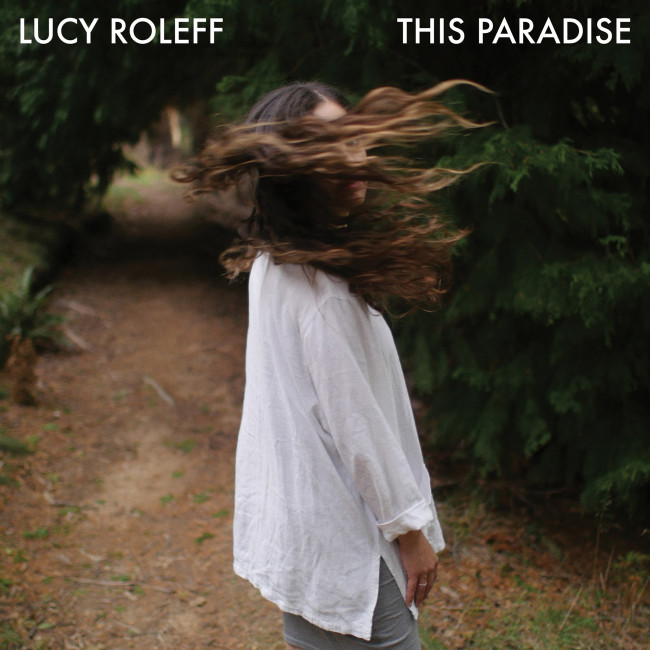 Rich family estates may be nothing more than signifiers of gratuitous wealth, but there’s still an undeniable beauty to be found in the old structures dotting the countryside of wider Europe. Each contains volumes upon volumes of history – generations of life, death, memory, and dynasty all condensed and soaked into the worn walls and floors. These could be mausoleums to entire families if given enough time.

Lucy Roleff’s This Paradise feels this way. As a piece of slow-moving, snow-swept folk music, This Paradise is obsessed with everything other than the present. It plays as though it were the memories of life long past, unrolling like parchment bearing a family tree. Roleff’s construction of the record makes use out of songs that were around back when she was still riding the praise of her original 2013 EP Longbows, so perhaps this is where the timelessness of This Paradise rests.

Even when Roleff isn’t revelling in the past, whether true or not; she’s playing out constructed situations to exorcise fears from all corners of life – motherhood, abandonment – hallmarks of someone that is still young, but surrounded by signs of aging and adulthood regardless. Architecturally, the album stands as a structure that’s seemingly formless, yet also refined in the way it moves from one song to the next like an M.C. Escher painting – a beautiful home in which you’ll walk through a door expecting a living room with a softly crackling fireplace, but instead finding yourself among trees, fog, or a city square.

That initial feeling of years old domesticity is owed to the recording of This Paradise, which took place over three and a bit days in a hundred-year-old hall in South Gippsland. The latter elements are influenced by Roleff’s own obsession with the details of middle European countryside – the elderflowers and edelweiss that dot the hills of Germany and it’s bordering nations, symbols of her German/Maltese upbringing.

You could liken it to something like Joanna Newsom, but Roleff doesn’t get as embroiled in her version of European imagery as Newsom did on her 2006 album Ys. Roleff’s intimate song writing standing as a more accessible contrast to Newsom’s hugely ambitious folk odysseys. Jessica Pratt is in there too; a key distinction should be made though – This Paradise takes more from Pratt’s more sombre self titled 2012 debut rather than 2015’s On Your Own Love Again.

While This Paradise is Roleff’s record through and through, it owes more than is initially obvious to the partner team of Tony Dupé and Claire Deak who served as the record’s producers.

Dupé has put his talents into releases from Grand Salvo to Sui Zhen, and it’s his and Deak’s extra instrumentation that give This Paradise polish that warms the intimate and closed nature of the song writing. Cello, glockenspiel and pump organ snake in from other rooms of the house that is This Paradise, rising and falling along with the peaks and valleys of Roleff’s own performance.

They never command the stage away from Roleff but instead feel a few feet detached from Roleff’s acoustic guitar focus, like instruments being played in a room across the hall that just so happen to find their place in Roleff’s songs like ‘Haus’ and ‘I Held Back the Hair’. Roleff herself isn’t confined to guitar compositions either; with a classical music upbringing, she’s got fingers working the keys of various woodwind instruments throughout This Paradise too.

Roleff’s lyrics are winding and unobvious in their explorations – illustrations of a dream filled to the brim with natural imagery and texture. Ivory, wood, diamond and silver. This Paradise draws on memories that seem ancient on songs like ‘Aspen’ and ‘How Will I Get That High?’, but in the instance of ‘Every Time’ and ‘Hotel Interstate’ Roleff grapples with more established concerns – the demands of love and its consequences, singing on ‘Hotel Interstate’, “what happens to the books and the friends / when we decide to bring it all to an end? / The former easy to divide, I guess.”

Roleff’s construction of the record ends up being the closest thing to a flaw. When I spoke to her a few days before it’s release, she revealed the scattered nature the writing of the songs underwent, Roleff doesn’t feverishly scribble lyrics at all hours of the night and her mind doesn’t run on time signatures and melodies, and the writing of This Paradise isn’t a single concerted effort. ‘Aspen’ was written as a reprieve from performing songs off Longbows back in 2013, and other tunes on the record trickled in through the cracks as time wore on. It gives This Paradise that aforementioned ‘impossible house’ vibe, the record being more a collection of songs than a singular package. It remains both one of the warmest and starkest folk records released in some time in Australia, it’s examination of absolute paradise serving up sunlit moments of joy and also grim shades of grey in it’s attempts to reach something that is ever only truly fleeting.