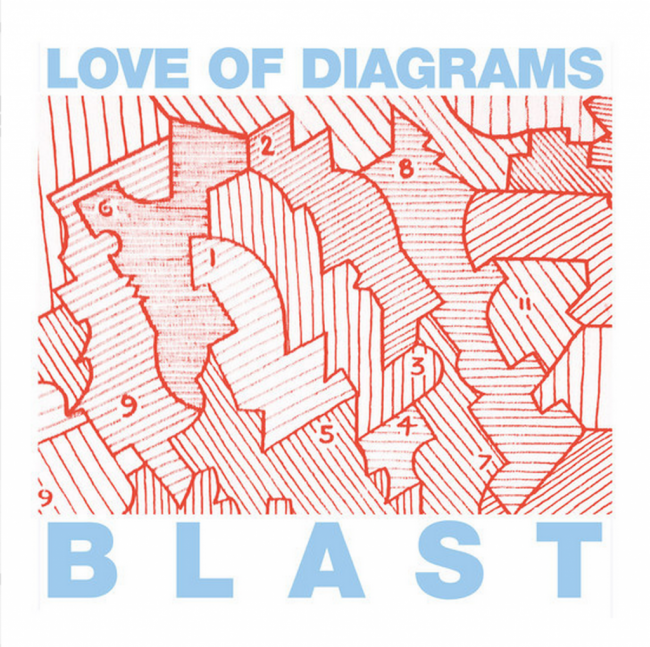 As I sit down to write this, I am acutely aware that I’m looking at one of Collapse Board’s own: Melbourne’s offspring, Love of Diagrams who – since the early noughties – have cemented their position on the city’s live music circuit with their disengaged melancholy and bracingly loud riffs. But whilst England, for example, can sit smug in the knowledge we rolled out political post punks, The Fall and a whole glut of doe eyed greats from the Britpop era (I’m looking at you, Frischmann) we also give you rabbity loons, Chaz and Dave and boy band banter and ITV2 shocker, ‘Blue Go Mad in Ibiza’.

Love Of Diagrams then should fall into the former elite, gnawing at the songsheets of Sonic Youth with their foggy chorus’ and his and hers vocal lines. Yet whilst guitarist Luke Horton and bassist Antonia Selbach do lock lyrics under a similar wall of no wave noise, in the case of Blast, there’s a little less buzz and a lot more bleurgh.

‘Double Negative’ is a welcoming opener, all clattering cymbals and wandering fretwork that thrusts us back to the limehouse of The Breeders POD, whilst ‘Falling Down’ will be a big hit with anyone looking for their chorus-stomp-distortion fix as Sellbach coos over loose guitars: “I’m friends with the sun”.

But Blast doesn’t blister but rather gently warm. Middling tracks ‘Photograph’ and ‘How You Run’ err on the side of lukewarm with their repetitive refrains, and woolly harmonies. Penultimate track ‘SS’ plunges us into a near dreamlike state and sadly ‘Different Way’ fails to wake us out of it. If Love of Diagrams were looking for a big bang in Blast, as Sellbach herself sings on the track: “It doesn’t make it out”.

Just like an episode of Blue Go Mad in Ibiza, Blast can play out in the background but it’s hard to say enrapt.