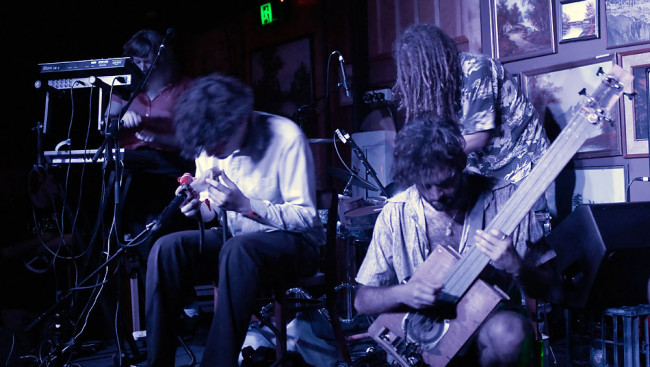 So once upon a time in Melbourne, there was a young man (or boy at the time) listening to independent music, going to all-ages gigs and loving the atmosphere of the music scene in general. He never really imagined that he would be an active participant in the scene but he loved the music… I spoke to Joel Stern, musician (although he doesn’t seem to like to own that title), co-initiator of underground gigs, groups and events, strong supporter of DIY, avant-garde and experimental art forms the world over and, quite frankly, one of the most switched on people I’ve had the good fortune to come into contact with.

I suggest you play this in the background as you read and it may help you focus on the screen for the entirety of the text…  http://cyprushillsong.bandcamp.com/album/heavy-syrup

So, eventually Mr Stern found his way to graveyard shifts in the wonderful world of public radio – 3RRR in his case.  What he discovered in these pre-podcasts and digital radio days, was that he could get away with almost anything on these shifts that typically don’t start till after midnight. So he and a couple of his friends started playing around with the equipment they had at their disposal. He didn’t play any instruments, but he did have records, a couple of turntables and access to samples and sounds. It was a small group of friends just messing around and having fun – but it lead to a realisation for Joel that music is not just about being able to sing or play a traditional instrument. It lead to his interest in sound itself as a mode of musicality, engaged his interest in DIY and the stretching of sound.

If I was to list every musical and event project Joel has been involved in since then, well I’d have to add another 500 words, so let’s just say he has been prolifically productive. So turn off Greg Boring for a moment, check out this Sky Needle song and then head back to the Greg Boring backing track while we hear some of his words, rather than mine.

We had already been speaking for some time, this part of the interview concentrates on his time in Brisbane, his attitude to DIY and experimental music, a little politics and what’s on the horizon for another one of the gems that Australia is lucky enough to have not just focusing on himself but also bringing international artists and their work to our shores so that we all get to experience them live – and generally for free.

So Joel, you bring amazing acts to Australia and do locally based events on a regular basis, however there seems to be a level of “need to know” within this. How do you feel about the percentage of punters who go to live alternative music venues and see their town’s local punk/rock heroes but are hungering for something more interesting – they just don’t know where to find it or maybe that it even exists so close to home?

I’ve never really considered it my job to promote or increase the popularity of things in that way, and I guess I’m sort of just lucky that the projects and scenes I have been involved in haven’t needed to be commercially successful to survive. No one involved would have even thought that was possible really.

You don’t think that scenes, especially in the experimental realm need to expand or die (OK, bad capitalist connotations in my question) – not necessarily monetarily, but with new people come new ideas?

Oh definitely, I don’t think it’s expand or die, I don’t think it as simple as that – that kind of has a sound of the logic of capitalism or something. I don’t think you have to set everything up as a sustainable ongoing concern. This area of art is not like running a business – and I find myself particularly attracted to things that shine brightly for a period and draw lots of people in, just because they’re different and have this energy about them and then when it’s over it’s a great memory. And some things do die. I mean Audio Pollen Social Club kind of died in a way but it’s been revived in different formats numerous times, and now seems to be doing great stuff in its latest incarnation with Tim Green at the helm. But some things do have their moment and then that moment has passed.

Tell me about the Audio Pollen Social Club as you experienced it?

Audio Pollen in Brisbane for me was like a confluence of a particular group of people, and at the time there was a large group of likeminded people, a space that was available and a culture around that and that lasted about two-and-a-half years and it was extremely intense. The thing that was intense about it was that the same group of say 60–100 people were happy to see each other every week for two years and not hate each other or get sick of each other, or decide… probably some people did. But there was certainly a level of camaraderie that we were all producing something together.

I’ve probably never been in a project where so many people felt invested in it personally. I mean there would have been at least 20 to 30 people who considered it their place and their project as opposed to one or two people pushing something very hard and everyone else’s role is just to turn up and support it. This was more like a collective. Both a collective investment and collectively run. It’s one of the really nice things that seems to spring out of DIY and experimental and avant-garde stuff is that collectivity.

Not to be too much of a card-carrying communist here, but I do think that maybe it’s outside the dominant capitalist sort of paradigm opens up new avenues. The  bands aren’t trying to be commercially successful, the scene itself isn’t producing commodities for the market – the scene itself isn’t a commodity in the usual sense. What’s at stake is something a bit different, the social exchange and relationships are foregrounded, and the market place is off in the vast distance.

[We continued to speak for quite a while. How this lack of commercialism allows artists to create without the pressure of the financial viability of a project and the new ideas that can be produced when this pressure is taken away. The homogenisation of ‘outsider art’ for bigger audiences to ingest as a neat package and how that ties into a capitalist system. Tips on moving into the grant world if that’s your dream. If it’s for your own projects or larger scale stuff involving international artists that you would like to bring to Australia and give local audiences a chance to experience. The tips were basically about learning your craft and teaming up with likeminded individuals and organisations who can share their knowledge with you.

Joel moved on to speak about the attitude of creative artists  in Brisbane that he hadn’t experienced in Melbourne. I know this is long guys, but play some more Sky Needle, or repeat the Greg Boring cos this statement is worth reading in his own words.]

In Brisbane I found an expression of freedom which is really social and about reaching out to people yet at the same time it has this awesome veneer of anti-sociality wrapped around it. That’s a basic punk thing I guess, being anti-social

Well, that’s still kind of a legacy of political oppression that Brisbane experienced through decades of the Bjelke-Peterson Government?

Definitely, and I’m aware that I only came to Brisbane in ’04, and I could see straight away that there was this amazing rebellious atmosphere in the underground music scene of not giving a fuck but at the same time also being really caring of each other. There were these gestures in the artwork that were really anti-establishment. However, not just the traditional establishment like the police or the government or straight society but also against the establishment of their own conventions. It was subversive even against itself. I think that tradition is really carried on by places such as Real Bad. It’s fucked up and it’s even rebelling against its own standards half the time.

Thanks to Joel for his time.

See links below to projects both musical and event wise that Joel is working on currently.