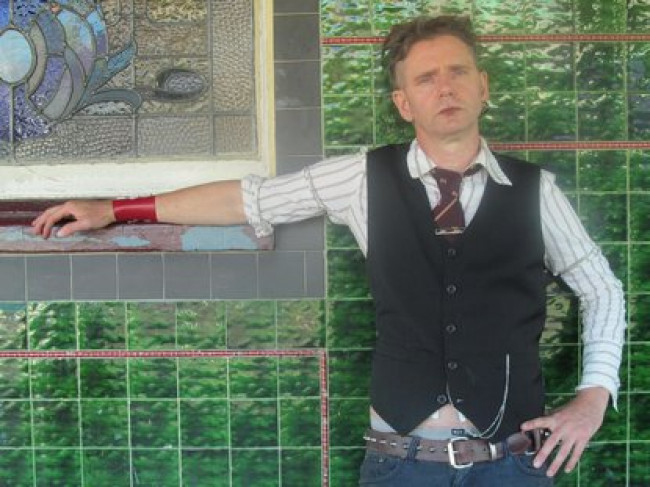 Gerald Keaney: Writer, Poet, Musician, Political Activist, Performance Artist, DIY Legend, Film Maker, Creator, Co-Founder and Participant in underground scenes and events across the country and throughout his adult life. All this while somewhere fitting in the time to complete a PhD in Philosophy while simultaneously undertaking these creative enterprises. He is still an active contributor to both academic journals and political blogs/action and his current band, Gerald Keaney and the Gerald Keaneys, are just done with their support shows for Killing Joke and The Paul Kidney Experience.

So why does he love the void, what experience can he share with us after so many years of creative activity and what’s next on his agenda? I sat down with Gerry and tried to get to the heart of his love of the void and his opinion on the impact of socio-political environments on underground music and art scenes.

Here’s what he had to say:

So Gerald, you have performed in many mediums in your time but you seem particularly attracted to the grass roots and DIY scenes despite having a Doctorate. Why do you think this is?

I find with DIY stuff there is a process and an outcome, both of which are attractive. The outcome that I was aiming for was communication of the kind of ideas that might improve society or enable people to challenge the existing social order – Capitalism. I believe that this social order is an inferior form of sociology. You can do this pretty easily by just crudely tabling ideas. That’s your outcome. In terms of your process, I guess some people have the ability to express themselves just thrown into their laps by the Gods.

It’s true that there are some people who are just talented writers or talented musicians, talented whatever, but for the rest of us – the so-called creative unwashed then DIY is good because it’s a learning curve. You’re not under a lot of pressure; you’re not going to lose a million dollars for anyone. It’s not about making or breaking a career, you can try things and if you fail it’s not such a big deal – you can try different things so it’s a much more expansive, generous learning curve.

So I reckon that’s the two reasons. As for doing academic Philosophy, I think it enables you to hone your ideas. But then if you want to do something with those ideas, the processes and outcomes that you find in DIY practice become attractive.

So what effect does the Socio-Economic background of a particular ERA have on the creative arts in your opinion? Do you think an extremely socially repressive and conservative era or government/political system, or economic factors like a recession or depression have any influence on the creative arts?

Well I suppose if you’re asking about the quality of the creative arts, then you’d have to ask what sort of qualities we might find relevant or interesting in the creative arts. I’d say the capacity to transform what’s around the artists is what’s important and art is primarily a vehicle of communication. Arguably it can be more direct too – you could burn down a billboard, but even there there is an important communicative content or opponent.

But do you see any direct correlation between economic systems such as Thatcherism and Reaganomics and the development of scenes like the punk and no-wave movements?

Unfortunately at this point we had some technical issues so despite Gerry’s eloquence I have to rely on notes now rather than quoting him verbatim. The outcome of that particular question was that if there is social and economic oppression and the means of creativity are taken out of the hands of those not lucky enough to have trust funds, they will find ways to create and communicate. They will build their own instruments, they will create their own paths and, if we’re really lucky (in my personal opinion), they may even generate something so new and exciting that it continues to permeate the culture for generations to come as punk, no-wave and many other styles of music and art have done.

Gerry was very involved in Brisbane’s original Audio Pollen Social Club (who will get their own piece in this column in the not too distant future). One of his key contributions to that particular enterprise was the creation of the ‘City in the City’ shows. These were guerrilla gigs run on generators and held under bridges featuring experimental/non-mainstream music and sharing of ideas. They were sparked by an article in an architecture journal claiming that these spaces should be reclaimed for commercial enterprises. In reaction to this, Gerry and some other member of the Club decided to reclaim the spaces for free creativity. They got no permits, they did little marketing but people came. It was inclusive; you weren’t refused entry to under the William Jolly Bridge because you weren’t young or pretty or didn’t fit the dress code. People who already inhabited these spaces who had been referred to as ‘trolls’ (the homeless, for those of us not up on architectural lexicon) were welcome to join and enjoy, and their space was returned to them after the shows.

Gerry recently put on another of these shows with a slightly more political bent. The new idea is called ‘Rattle Against the Sabre’ and acts as a protest to a huge $50 million annual Army Reserve training exercise. These yearly events not only destroy the natural environment they inhabit but also spend a lot of money on exercises that few of us even know exist and have questionable – almost immeasurable – outcomes. He has another one planned soon. They are more politically focused now, with speakers from various political backgrounds, printed information handed out and bands that tend towards some more politically lyrical content.

He is still writing and performing live and filmed performance poetry. The Gerald Keaneys and the The Gerald Keaneys have recently recorded and are working on a film clip. The plan for the early August is to bring Bronwyn Bonney (Bronwyn Adams) of Crime And The City Solution to Brisbane to play a show featuring her new solo stuff, which is certainly worth a listen.

My last question to Gerry had to be about the use of his own name twice when coming up with his band’s name. After quite serious content throughout the interview, I finally got a bit of a grin out him and was asked if we could stop there! So it remains a mystery is it ego or irony or a political statement? Decide for yourself!

More of Gerry’s work can be found though the following links:

2 Responses to Lost In The Void: Episode 3 – A Profile of Gerald Keaney