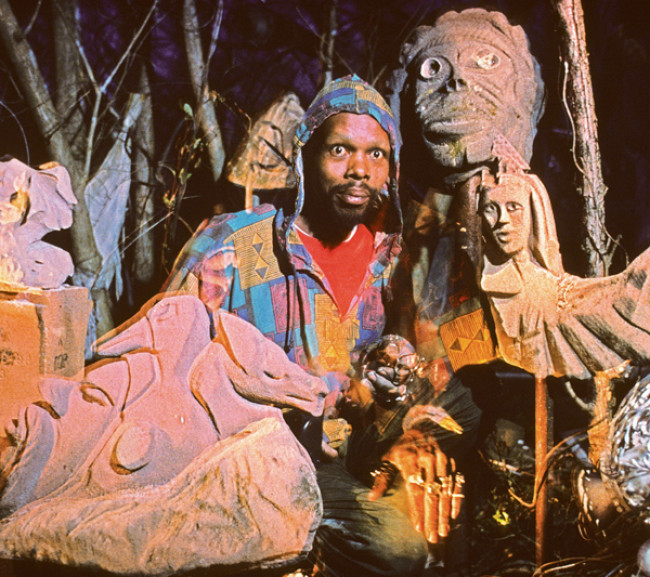 Detail, commentary, comedy, conversation. All over a single Casio pulse.

By all accounts, this should have been a review on Keeping a Record Of It, the LP that Casio-devotional-blues-journeyman Lonnie Holley released last year.

However. I reckoned that many of you reader folk weren’t familiar with Lonnie’s earlier work – and neither was I, so I dug up last year’s Just Before Music, his debut.

Now – to clarify a few things. First, Lonnie is 73. Second, on that new LP is everybody’s favorite guitarist Bradford Cox, and some other dude named Cole Alexander (of the Black Lips – i.e another garage revivalist group; apparently these two have also teamed up before in a project called “Ghetto Cross” – hmmmm). They butted in on two tracks on Keeping A Record of It and created these glossy, jingly jingles that sound faintly African and largely repetitive.

You can see and hear the results in this video. Dust to Digital – the label – are clearly trying to forge this image of Lonnie as the very competent sage of the studio, the center of a bubble of hipness where equality is real because these three can come together in the Deep South (which, by the way, Atlanta is NOT) and jam the day away.

However, this is not Lonnie at all. The relaxed professionalism, the clockwork sissy groove, the flighty collapses, a tempo – all LIES. And as dull as dry red dirt compared with Just Before Music.

Because when the white kids came in, with all their tech finery and music theory, they pulled Lonnie away from the listener. “No, you sit here and be a musician,” they said.

But Lonnie is not a musician. He’s an observer.

This is from the first LP. And this is precisely why that release is better than the new one – so much more happens in this fifteen minutes than the calculated harmony of “The Other Side of the Pulpit”. Lonnie reflects on the material girl and her room, “running through things that don’t even last”, veering from shopping malls to flammable gases to “BOOM BAM BSHAW” to American Idol. Detail, commentary, comedy, conversation. All over a single Casio pulse.

Just Before Music is just that – before the engineers, before the show-offs, before the marketers and their clever image-branding. Who needs guitars or drums when you can criss-cross between the histories of technology and culture with just one chord and a film reel?

Ergo. This should have been, by all accounts, a review of Keeping a Record of It. Which, mind, still contains some perfectly minimal and Lonnie-esque tales, like “The Start of The River’s Run (One Drop)” and “Six Space Shuttles and 144,000 Elephants”. But Mr. Cox and Mr. Alexander robbed it of the insight, the cosmic depth, the cheekiness, and the stark wonder of that first LP. So…whoops.

One Response to Lonnie Holley – Just Before Music (Dust to Digital)