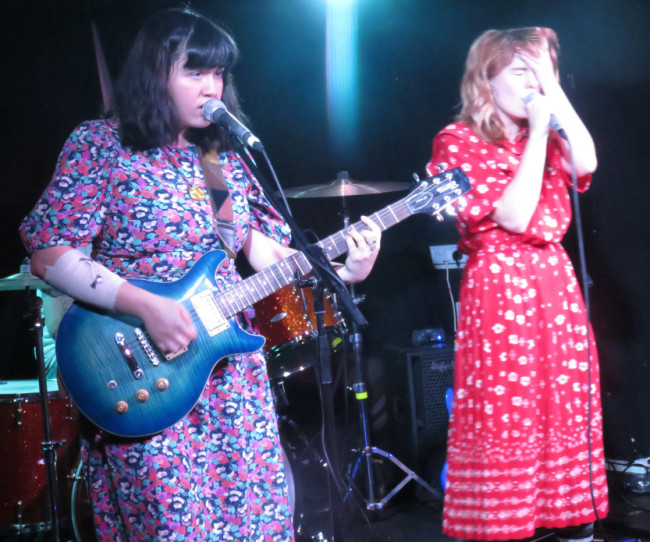 Words and photos by Toby Goodwin. Reprinted with permission from Musicgigsnthings.

Skating Polly’s first performance was at a family Halloween party in 2009. Well they were only 9 and 14 at the time. Now in 2016, after supporting Babes In Toyland last year and with the recent release of their fourth album “The Big Fit”, the duo are back on these shores for a short series of dates, including here at the Moon Club in Cardiff. Both Peyton and Kelli are multi-instrumentalists, swapping between drums and guitar with apparent ease and also sharing vocal duties.

After seeing them on the 2015 tour in Manchester and frankly being astonished by them, I thought I knew what to expect. Except in the intervening twelve months Skating Polly have gotten even better – they’ve taken it up not just one but several notches. That searing intensity is still present and correct, the raw vitality they bring to their live performances setting their songs free to surge over, around and through the crowd. Their vocals are even stronger and dovetail together perfectly. Kelli’s voice is the higher of the two, changing almost instantaneously from placid and calm to an anguished howl that her petite frame should physically not be capable of producing. She’s a force of nature. Equally impressive, deeper and more resonant, is Peyton’s voice, which can also come up with a scream to stop you in your tracks. The two of them, together on stage, produce a volume of sound that has you looking on in disbelief, wondering where the massed ranks of musicians must be hiding. They’ve dubbed their music, an amalgam of grunge, punk & riot-grrl, ‘ugly pop’. Which is both extremely apt and also misleading. For these songs are a thing of beauty, some quieter, more reflective, others a maelstrom of raging noise.

Opening track ‘Hey Sweet’ is fierce, the sound of a tornado from their home state being unleashed upon the audience and there’s no let up as ‘Perfume For Now’ kicks in. ‘Ugly’ is a musical riot, ramping up the decibels even further, all aggressive riffs and pulverising drums. Instruments are swapped and the Peyton-led ‘Van Gogh’ is a hypnotic blur of a track, urged relentlessly on by her guitar. The knowing, power-pop of ‘Prefective Boy’ adds a lighter touch to proceedings before a cover of Madonna’s ‘Beautiful Stranger’ casts the song in a whole new light. Penultimate song ‘Alabama Movies’ is a raucous explosion of energy and fury that threatens to leave the venue needing a new roof. For their closing track ‘Placer’ the drums are handed over to the producer of their latest album and long-time drummer for The Flaming Lips, Kliph Scurlock, rounding off the evening’s performance with suitable aplomb. This was a frighteningly good gig, loud, muscular, but above all pure undiluted fun. It will stick in the minds of those privileged enough to witness it for a long, long time. A little bit of Cardiff will forever belong to two step-sisters from Oklahoma. Thank you, Skating Polly.

As well as the blistering performance by Skating Polly, the evening also featured three excellent support acts, namely Hannah Golightly, Think Pretty and CHROMA. Opening proceedings, having travelled down from Chester, was Hannah Golightly. Being first on stage is never easy, but after a slightly nervous start Hannah was quickly into her stride. Her lo-fi, riot grrl-inspired sound gives room for the songs to breathe and lyrically her use of words and turns of phrase is, at times, outstanding, particularly on my favourites ‘See You In The Shadows’ and ‘Poison Kiss’. The latter, especially, was delivered with gusto and her set resonated with the crowd who had arrived early and who showed their appreciation.

Next up was Cardiff’s very own Think Pretty, a riot/punk/grunge/art-rock inspired two piece, consisting of singer/guitarist Laura and drummer Junko. Their songs are built around Laura’s cavernous voice & buzzsaw guitar and the pneumatic-drill like drumming of partner in crime Junko. ‘Sex Pest’ is a frantic opener and there is no let up in intensity throughout the seven track set, that culminates with the double whammy of ‘Ain’t No Pill’ and ‘Bones’.

Final support band of the night hailed from Pontypridd, CHROMA, an alt-rock trio made up of Liam Bevan on guitar, drummer Zac Mather and vocallist K-T Hall. Their sound is a kind of melodic fury, all angular guitar, driving drums and K-T’s voice switching from quiet, almost demure to full-on scream, a performance made all the more impressive by the revelation that K-T had only recently recovered from pneumonia. Highlights of their set were ‘Blame It On Me’ and their latest single ‘Datod’.

Would highly recommend all three bands, and hopefully Think Pretty & CHROMA will get to play in the north-west sooner rather than later.