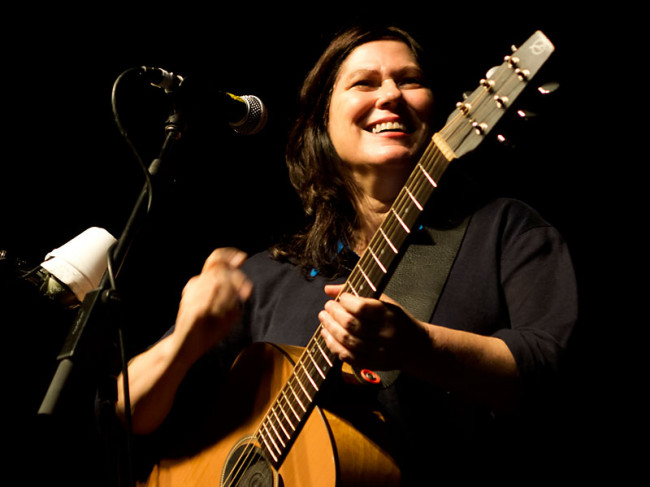 Surely, writing about The Breeders for Collapse Board is futile. Scott Creney reviewed them just months ago and he has that esoteric third eye that goes beyond the ordinary sight of things, and always finds the mud or gold.

So when The Breeders play Brisbane, what am I going to talk about? How it’s (to quote Scott) “goofy and silly one moment, raging the next”, the band’s personal charms and quirks, the bigger meaning of The Breeders, that when Kim and Kelley walk on stage it’s not the music I care for, but the Bigger Idea?

You don’t need me to tell you they played Last Splash with a brief Safari interlude thanks to a broken violin bridge (Kelley: “Yeah, but it can still be played right!). That they lined up, Kim, Josephine and Kelley [and Jim!, and a bonus keyboard-player – Ed] and after a little interlude went on to play some Pod and B-side stuff. All you can ever really have at a concert are thoughts and feelings anyway: there’s nothing in it that’s Rational or Objective.

Like this: I wish I smiled more. It’s the typical rock association that to be a serious female musician, who isn’t taken for her sexuality, means sometimes foregoing any niceties, becoming a hardened shell that’s so serious, but so lacking. Kim and Kelley smile so much I know that they’re THERE. So when rebellion and the disaffected male have so easily been commodified and are now a staple image, it’s a smile, a dorky discourse, some sincerity, that lets you know what’s really important in life and shows you the real, but often overlooked, forms of dissent: to be in the world of rock and not be an asshole. Of course love can change the world, and that’s all I see when I look at Kim Deal.

Or this thought: Josephine is terrifying and has intimidation in a way that I’ll never master. She surveys audience members, locks in on one and stares – for a long, long time. All I can think about is that Conan O’Brien interview where Josephine leans over and gives Conan a hickey and he sits back, puts his feet on his deck and says something like, “Ah, my first hickey from a rock chick”. He was probably shitting himself.

And how about when they played ‘Roi’: I used to think there was something wrong with me, that out of a whole album of simultaneously complex and simple melodies I would play the non-song repeat on the bus. Even live the sounds are still hard to locate, so encompassing and ambiguous and with Kelley, bent over and totally savage, yet still strangely happy.

Or: It’s okay to be daggy – in fact, people like might you more if you’re daggier, it gives you an immediate endearing nature. It’s just so obvious when The Breeders come toddling out and they’re so incredibly dorky – I even think Kim waddles and I start laughing cause my personal female rock icon WADDLES! They wave to us at the end for about 30 seconds and I just can’t believe how silly and earnest they are, but there I am, smiling and waving back, dork to dork.

But what’s the point – you’re expecting me to linguistically capture a moment in time and I’m not sure language is really up for that. Only our musical sounds (not our words and phrases and metaphors and metonymies) are in sync with our intuition. If we’re trapped within language, then surely the writer’s task is to find themselves outside the structures, to use the convention as their plaything.

Well, then. One last thought: After boarding the bus one day, seating myself in the back right hand side, I looked down and out the window. Below, in a red Holden Commodore, was a man blatantly naked, his penis tucked in limply, the light rolls of fat sitting unabashed on top of each other while one hand drove and the other hand rested on the frank tan-line of his thighs. And all I could focus on was his face, so relaxed, at ease and I think: This is life. Of course it’s startlingly voyeuristic – but that’s old news. What’s important is the freedom, the smiling, the casual construct of each move, the simple joy – imagine that, naked, tucked in like a cocoon but still able to feel the air gushing around, caressing every body hair – happiness as a physical manifestation, the liberty that comes of simply being open, the quiet thwarting of all convention, the dissent that comes with just smiling – the suspension of just being there and being human.

And that’s The Breeders, a naked man joy-riding in a car.