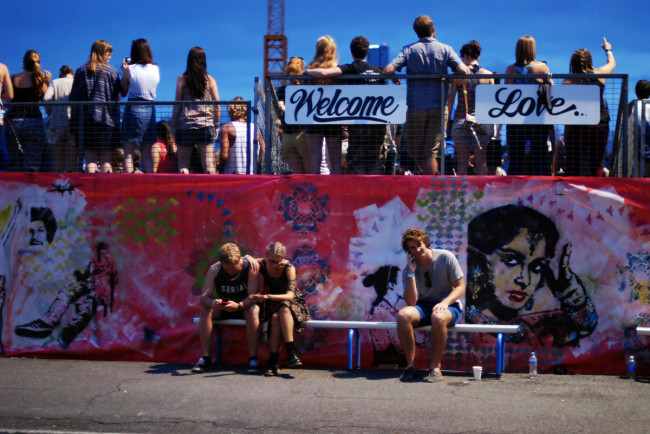 For the first time in recent memory, Laneway’s line up this year failed to grab me. Megastars Lorde and HAIM made the relatively low ticket price seem worth it, but I was dubious as to whether each of the acts could pull off strong performances. So it was with a steely air of impartiality that I sailed into Alexandria Street on an over cast but bright Friday, to mingle with a fairly decent turn out.

My first venture was ole’ favourites Frightened Rabbit. Taking to the Carpark Stage, they attracted a smallish crowd of uber fans conducting hearty sing-a-longs. Lead singer Scott Hutchison’s delightful Scottish brogue was lost a bit due to iffy mixing, but the bearded folk-avengers more than made up for it, playing heavily off their excellent break out record Pedestrian Verse.

Next up was Vance Joy, whose set at the Alexandria St Stage I attended out of mere curiosity. Here’s an objective statement of what I found:

That’s all I will deign to say about Vance Joy.

It was with a fluttering heart that I waited for CHVRCHES set. I have a morbid fascination with the Scottish trio that may or may not have to do with the fact that they make the best music to belt along to while cleaning your house in your underwear that I’ve heard in a while. They were, in a sentence, underwhelming yet solid. While they played the majority of their embarrassing-dance-move-eliciting electric debut, lead singer Lauren Mayberry was decidedly static. I was expecting something a bit more dynamic from the bell-voiced powerhouse who penned an alarmingly accurate takedown of sexism in the music industry and thus was left slightly cold by her lack of engagement, aside from a few adorably perspicacious remarks. In contrast, her band mates ripped into it, with appropriately disco-esque dance moves. Album stars ‘Gun’ and ‘Recover’ elicited excellent audience responses but goddammit, Lauren! Spit! Snarl! Do anything! Oh well. Kill yr idols and all that.

Onto the washed out skugg of Kurt Vile and the Violators. Personally, I liked the longhaired Drag City alumni’s older stuff more (can I say that sentence and still be taken seriously?), with his more stoner rock brand boring me slightly. So, I was suitably impressed that the band was cohesive and strong, covering Vile’s songs solidly and precisely. Vile’s smallish shuffling turn-out of stoned-looking devotees moved in unison with the band, stomping and cheering with an enthusiasm that belies their adherence to soft-grunge passivity.

I was dragged along to Unknown Mortal Orchestra by a friend: the best way to describe these guys is if Phil Spector collabed with Rage Against the Machine. Have you got that mental evocation? Now make the resulting music worse by a degree of 100 and you have these guys. Do people really like this crap? Lo-fi psychedelic indie music needs to go back and stay back in 2011 please, along with Charlie Sheen and ‘Friday’ by Rebecca Black.

So onto HAIM. Ahem. I have a complicated relationship with this band. I’ve made a lot of Wilson Phillips jokes this year pertaining to the three sisters, with someone at a party the other week telling me off for daring to tarnish Wilson Phillip’s name with such a comparison. This derision heightened with how they reacted to Los Campesinos!’s apparent barb (hint: it was not classy. And who vanity searches their own band? Lame.). So it was with an air of incredulity that I must report than, well, they were fucking excellent. Like, standout of the night excellent. Damn, I really did just type that. The girls were surprisingly solid and awesomely proficient at their instruments, with a bubbly, lively stage presence that got the crowd up and dancing with dorkish abandon. They kept it interesting by alternating between singers and their excellent use of floor toms, the most underappreciated instrument. In the end, I found myself staring around in wonder as they got the audience belting along to the singles with them like an 80’s stadium concert.

After the mess of dancing and sweat that was HAIM, Savages was a more funeral affair inside at the zoo stage. A small crowd tottered around as the band noodled away with an energy that made me rethink my passing off of their acclaimed record. Lead singer Jehnny Beth ‘s chatty yet puzzling conversation was a definite highlight in a set that felt a little light.

Now onto the main course: Lorde. Full disclosure: I think she’s perfect. A queen. She prefaced ‘Ribs’ by stating that she wrote the song after last year’s Auckland Laneway festival and was now playing that song to a Laneway crowd. This is the future and that future is wild-haired underage hobbit-children getting inspired by festival drinking and then making it to number one in the US with swathes of impish naivety.

I am totally okay with this.

I had ‘Royals’ on repeat for a significant part of the latter half of last year, as did the rest of you sorry fuckers. The girl is 17 and already has a Grammy. When was the last time a Grammy winner played at Laneway? Will this be a recurring theme, now that the Grammys have finally caught up to ‘indie music’? Will Unknown Whatever Fucking Orchestra have a Grammy next year? I don’t care. They will never be as amazing as this girl.

Given all the cultural implications swirling around her, I was conscious about not being too harsh or too fangirlish on her. Unfortunately, her set list was a mess: a plethora of slower songs I couldn’t recall from the album preceded ‘Royals’ thrown unceremoniously into the awkward, undignified fourth song spot (but the crowd perked up!), then back to the slower crawling shuffle. Astride her delightfully minimalist stage set up, her excellent elvish dancing was the only thing about her set that played to her strengths. I am so sorry, my queen, but your set lulled heavily in the middle and the crowd seemed to struggle with the length of it, but you finished strongly! Triumphantly! The lesser mortals known as HAIM were back stage, tearing up the dance floor in allegiance with you, my queen. A guy next to me said you weren’t that great. I smote him for you, my queen. Then you did a quirky dance routine to ‘Tennis Court’. All was well.

I could not fathom why Lorde wasn’t the headliner, but instead of pondering that conundrum further or perhaps even staying to see what The Jezabels are* *(Jezebel: je – za – bel noun A garden variety alternative band that gives credence to whatever the fuck that dude Whitley said about Triple J being homogenous.) I got a burrito and talked to a shirtless dude tripping on something or other about the monogenre and whether Lorde and HAIM and thus Laneway were incarnations of it. Tripping-dude said yes. I said Lorde was god. He asked me why Laneway didn’t have printed timetables. I said I’d end my review with this puzzling conundrum. But I’m not going to, and you know why? Because we’re fucking lucky to have Laneway. No other festival knows and caters to its audience with such sensitivity by bringing international alternative bands in a convenient, one-day setting. Long live Laneway. Long live Lorde. Amen.

Feminist and music blogger who must heartily refrain from inserting pretentious Morrissey lyrics here to emblematise her constructed cultural identity and appear as fey and intriguing as possible in 50 words.