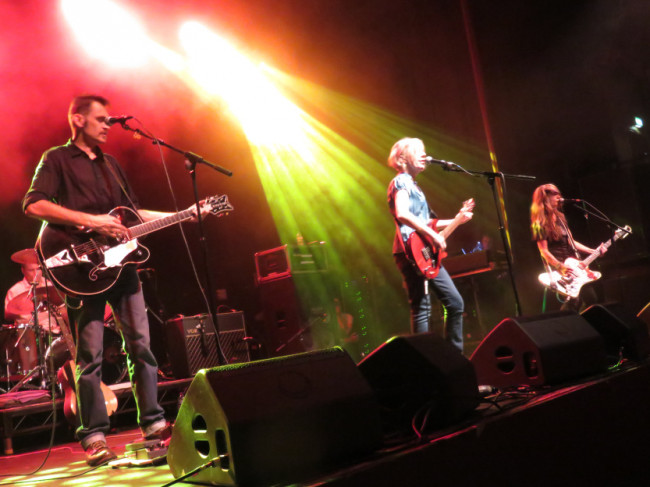 Reprinted with permission from Toby Goodwin of musicgigsnthings.

It was over twenty-three years ago that I first saw Belly live. To be exact it was Saturday 13th February 1993. At Wulfrun Hall in Wolverhampton. The Cranberries were also on the bill. I’ve still got the ticket and more importantly, the t-shirt I bought at the gig. So twenty-three years later I find myself at the Ritz in Manchester, wearing the original t-shirt (it has survived the intervening years far better than I have) to see Belly once again. Numerous bands from the 90’s have recently reformed, booked the tour bus and hit the road again. So the primary question I had was, would Belly, formed back in 1991, still be able to cut it live? Or was this just an exercise to milk some money out of fans eager for a dose of nostalgia?

Any such fears were swiftly erased and put to bed. This is a band back for the right reasons and determined to do things their own way. For a start there’s no support act. Instead Belly play two ‘sets’, with a short interval in-between, playing for the best part of two hours in total. From the outset the bonhomie between all four band members (Tanya Donnelly, Gail Greenwood, Chris Gorman & Tom Gorman) is obvious as smiles and quips are exchanged. This is a band clearly having fun being together and sharing a stage. Gail is jester-in-chief, wisecracking with the crowd and her fellow band members. She is wielding a big battle-axe of a bass, one last seen severing heads on a Game Of Thrones, but here being used to create a tight rhythm section along with drummer Chris. Guitarist Tom goes about his business quietly, unobtrusively, but his playing drives the set along. Then of course there is Tanya on lead vocals and guitar. An alternative icon of the 90’s, having been in Throwing Muses (with her step-sister Kristin Hersh) and a founder member of The Breeders (with Kim & Kelley Deal amongst others), her voice radiates warmth and emotion on the slower, more intimate tracks and still possesses a youthful exuberance and playfulness on their more effervescent, indie-pop hits.

‘Angel’ and ‘Slow Dog’ start proceedings on a bright note and set the scene for a double set that covers both their album releases (Star and King) and the various EPs and B sides. New material is also featured, with ‘Punish’ being the first to be played, and it fits seamlessly alongside the older material. Gail playfully admonishes the crowd that next time she expects them to know the words as the audience has up to this point being gleefully singing along. ‘Feed The Tree’ threatens to raise the roof and ‘Low Red Moon’ becomes a brooding, epic masterpiece. After the interval to allow both band and audience to catch their breath, ‘Spaceman’ and ‘Untogether’ slow the pace and elicit a hushed silence from the crowd, who fall quiet to enjoy every nuance and note. Bouncing is resumed once more as ‘Gepetto’ and ‘Dusted’ surge forth from the speakers, heralding the second of the new tracks ‘Comet’. Final track, appropriately is ‘Stay’, with its repeated refrain of “It’s not time for me to go” sadly not being true and thus bringing the set to an emotional close.

So were Belly (2016 edition) worth the wait? Oh yes, they certainly were. They’ve successfully bridged the gap of twenty odd years, and still sound as fresh and enthused to be playing their music to an audience as they ever did. Welcome back, Belly. Lets hope you stick around for a while.