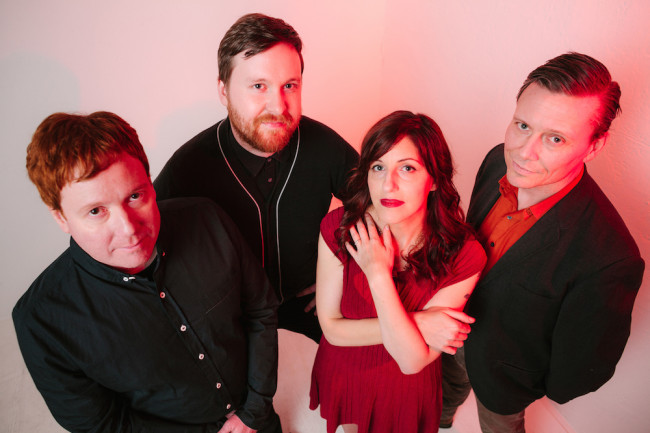 Through my job, I’ve seen more gourmet cakes in six months than in my 25 years of admiring cakes. The real luxury in these confections usually isn’t the cake itself, but the two-inch glove of gummy fondant frosting, often curled into pink ribbons atop the solid white base. Now, most guests just can’t handle that much sweetness at once, and so we wind up trashing dozens of icing crusts and sugar ribbons. That’s the risk that some musicians face when they take on the sun-drenched side of their art – too much bliss, and the listener could tune out. But as veteran purveyors of dreamy indie rock, The High Violets know how to temper their dulcet tones, and Heroes and Halos, their fifth LP, showcases that finesse. Granted, it’s no three-tier wedding cake, but it’ll still sate a crowd.

Now, yes: with Kaitlyn ni Donovan’s angel-wing voice and the gently washed riffs, these guys do resemble Lush. But the High Violets lack any of the muscle or orange fuzz, opting instead for pale blue linens and lavender jangling. And while that sounds as sterile and dull as a Downy commercial, some songs hit yr ears like menthol under a stuffy nose. Opener “How I Love (Everything Abut You)” greets the listener like an oasis, all crystal-clear light and hooks to quench a burning throat. “Longitude” gallops and even burns with the menace of an overbearing lover. Nothing jars or electrifies the listener, and certain patterns and textures tap nostalgic nerves for anyone well-versed in the 90s – but that lends to the strange sense of calm that surrounds the LP, as if the very trees cease to shudder and stormy gales pass around its space.

What separates the High Violets from complete stillness, though, is Donovan’s sincerity, as her confessions of love border on piety: “we are all beautiful & equal in your eyes,” she says on “Bells”, and you wonder if she devotes herself to a power higher than mere mortals. But in the laid-back, more Slowdive-ish title track, Donovan affirms her sublime optimism for mortality: “it’s hard for me, when I believe mercy’s in this life”. You could call such hope naivety, but in Heroes and Halos the High Violets wave their ideals like magic wands to banish evil and ill-will.

To be dead honest, though, Heroes and Halos coasts on an earthly plane – “Ease On” and “Comfort in Light” drag with dated grooves – until the closer. Ohhhh, “Hearts In Our Throats.” All over this album, Donovan talks about beauty and love and grace, but for “Hearts” the Violets manifest true glory. With little more than flutes and gentle synth sustains, the song creates its own little sunrise-lit haven, some misty bay or mountainside or anywhere far away from deadlock traffic and third-floor apartments. I’m reminded of the enchantments that His Name Is Alive would cast on me from the car stereo.

So, Heroes and Halos may not be the cake you’d order to impress yr wedding guests. That’s fine. The High Violets aren’t out to prove anything – except, perhaps, that bliss does exist in this life, and that love can indeed conquer all. You don’t have to believe them; just step in their world and let the light soak into your skin, and you may not want to leave.

The High Violets’ new LP drops this Friday, and you can pre-order it here.