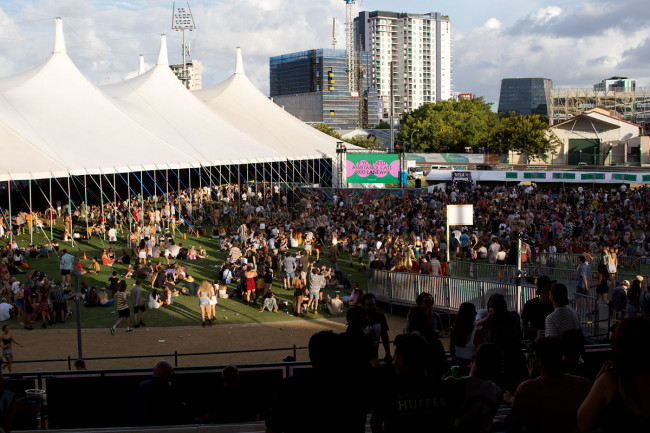 Newcomers join, festival swells. Comsos Midnight. Lights flash, limbs fly. A blur. ‘Walk With Me’. Everybody goes nuts hurling the lyrics back at them.

They leave. A drummer beats out time, Jorja Smith joins. She gazes, cooly present and poised for greater things.

David Le’aupepe thumps his chest. Self-serious, close to comical but for some reason you care. Gang of Youths are kinetic. They play songs triumphant and make grand gestures. At a time where many artists stand for nothing and very little, they have a mission even if it is just chasing a rock dream. It ends. A thousand chattering voices spill into a dark night.

The festival felt new. Was overwhelmed by the momentum of the bands. Lie awake. Thinking about those missed. Camp Cope, Courtney Barnett, Charlie Collins, The Smith Street Band, Parquet Courts and Sweater Curse. I message friend, ask if they saw them. They send back something else.

“Yellow Days brought a choir of punters that relayed lyrics in unison with him. He was kind, bending down to wave and catch eyes with the crowd. The band brought a smooth and upbeat sound, providing a calming attitude to lead into the following showcases. Then I got too cooked.”

I tell them I will work it in.