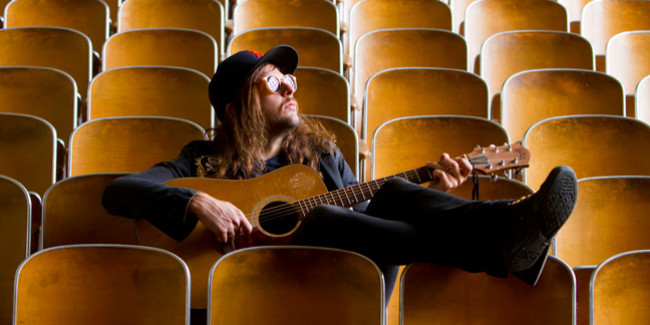 One moustache, one mop, one pair of boots. The three surfy punk kidlets that make up Thigh Master kick things off, Aussie accent shiiiinin through. At times melodic, at times rough sounding, almost always a little 70s sounding. Admittedly, I get bored halfway through the set and find myself staring at the amps sat on milk crates, until the frontman knocked me out of my not-so-daydream by mocking a screaming audience member. While the drummer takes off his glasses to wipe the sweat from his brow with a denim vest, the band admit to having made at least one of these songs up yesterday. As they attempt a guitar-shredding start that doesn’t quite work out resulting in a restart, well, I believe it.

Screaming Match’s Drea Lam puts in a special request to have a fan blow her luscious locks back as she brings the doomy bass, while drummer/singer Sarah Byrne stands behind her kit for the set. The show doesn’t really start until ‘$40’, which sees everyone in the room go a little mental, including the music critic responsible for creating this here online magazine.

“GET OVER IT!” ugh, ‘Heavy Depp’ RULES. The vocals are honey and it’s all bass everything. The band is obviously having a ball, which I’m sure you know is something that most bands like to keep a secret. The dual/duel vocals are so right with that “falling down the stairs” bass on ‘Mess’. A false start finish and two babes having a screaming match close it all off, and I must say, I’m sick of basic men too.

Cannon are pure, dirty, En-Ar-Gee. They’re all “let’s break things and get drunk and yell at each other”, not necessarily in that particular order. Chest thumps and dry humps, it’s pub music for the masses. Crowd favourite contenders ‘Girls’ and ‘I Hate Everything’ prove exactly why this band has played almost every show I’ve been to in the past year. Viva Kenmore!

As King Tuff jump up on stage I hear someone make a terrible “the 80s called, they want their hair back!” joke. Mo’s all ‘round and sporting blinged-out denim vests (tonight’s theme, perhaps?), the Tuff instantly have the punk kids up front ooh-ing and ahh-ing at the guitar mastery on display. In fact, there are more guitar solos throughout the set than you could poke a twirling drumstick at. ‘Keep On Movin’’ is more like ‘Keep On Dancin’’, and I guess you could say that King Tuff sound like garage hillbilly metal, grounded by a bassist who looks like he came straight out of a 70s porno.

At this point some guy in the crowd grabs me and makes me dance to KT’s new song, ‘She’s On Fire’. Not going to include a bad stop, drop and roll joke here. ‘Bad Thing’ closes the set before we all run for the last train home.